Impact of interest rates on automobiles: Pain or gain?

For the industry that is accustomed to drive on automatic at a healthy double-digit growth rate, is not immune to cataclysm. Vehicles sales have crashed for the past so many months and due to sluggish market conditions, high interest rates and fuel price deregulation hasn't work in the favor of consumers so far. Negative sentiments have erupted which is why people are refraining from buying vehicles. The upcoming union budget is keenly watched upon as it might be bringing in some extreme changes in the policies related to automobile industry. 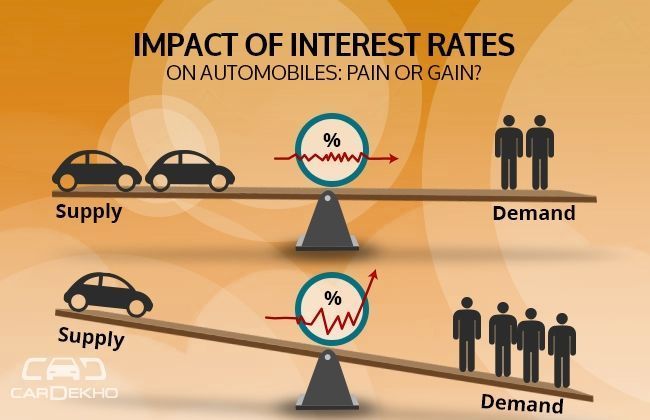 Impact of interest rates on consumers and industry

High interest rates always affect consumer spending decision, especially when he considers buying a big item like a car. When the rate of interest is high, it shows the overall high level of buyer demand for goods and services. In the field of automobiles, it signifies a relatively high figure for the demand of vehicles. And when the same supply of vehicles does not meet the demands of consumers, the car prices upsurge naturally. The difficulty is that the increased demand of vehicles and high interest rates point towards rapid growth of economy while this can actually lead to disastrous economic slump.

High interest rates tend to depreciate the value of money, giving consumers reduced purchasing power. This simply means consumers have to shell out extra bucks for the same car that would be comparatively cheaper when interest rates are low. This diminution of purchasing power often leads to decrease in consumer demand. This makes automakers to cut the production to reduce supply of the vehicles.

The current situation is creating negative sentiments in the domestic market, though people are buying cars but sales volume are a bit let down. Moreover, high fuel prices have dampened the sentiments in the industry which is crying out for some quick stimulus. According to HMIL, there must be a clarity on diesel pricing, prolongation of subsidies and lowering interest rates which are some of the policies that need to be focused on. With new stable government at the center, industry experts are expecting economic reforms like Goods and Services Tax (GST) and speeding up the delayed infrastructural projects to give a fresh lease of life to the economy.

How have interest rates affected the industry so far?

General Motors Vice President P Balendran said that upcoming budget is expected to shower some good news for the reeling sector. The interest rates are expected to fall down or at least remain at the current level so that the auto sector may recover in the second half of the year. Recent sales statistics show that the industry is in no mood to bounce back. Mahindra & Mahindra, the largest SUV manufacturer saw a steep drop of 18 percent while Tata Motors saw drop-down of 17 percent last month. High interest rates were blamed for this bad score. While the overall domestic and export sales might have shown slight increment but not enough to sustain long term growth.

Budget 2014: What can be in it for the end consumer

After two years of rigorous downfall, the auto sector has started showing signs of improvement if we look upon the overall sales of May 2014. Just recently, it was announced by the finance minister that excise duty cuts have been extended to six months, so there is brief respite or say some time to get back on track. But there is lot to be done for the steady growth. Low interest rate is one of the significant tools to propel sales. Reduction of interest rates will increase credit availability for the purchase of vehicles that will in turn favor the buyers. It will also give impetus to the launch of new vehicles in the market so that the consumers can purchase their favorite car with effective purchasing power in hands.

The positive upsurge in the economic sentiment and the reducing interest rates are some of the potential tools to keep the auto industry on growth trajectory. So far, the impact of interest rates has severely affected the growth chart. Also the festive season will be coming in a few months, so there will be goodies for the auto industry and the buyers at large. Let’s see what Modi government can do to bring cheers on the face of consumers in India.