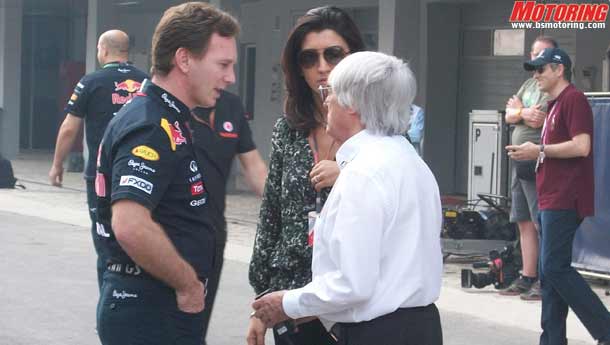 1.    They all seem larger than life on television, but in person they aren’t all that big. And it’s not for nothing that former BAR-Honda driver Anthony Davidson is called ‘Ant’. He’s really that tiny.

2.    Being Nico Rosberg can’t be easy at all. Through the Mercedes GP press conference, there must have been three questions to Nico, and 15 to Michael Schumacher. Nico doodled and drew on a notepad in front of him. Poor chap.

3.    Bernie Ecclestone’s quite a terror when it comes to how F1 runs, but to fans, he’s a pleasant chap after all. He posed for pictures, signed autographs and what not. One fan even made Bernie’s daughter take that photograph – owing to the fact that she’s generally the one in front of the camera, she looked somewhat surprised.

4.    People in F1 are generally more approachable than we’d thought they might be. Of course, some of the drivers weren’t too pleased to be bothered when they were discussing race strategy with their engineers. Fair enough, too. Oh and in case you’re wondering, it wasn’t us that disturbed them.

5.    Triple world champion, Sir Jackie Stewart was wandering around the paddock as a consultant with Lotus Renault GP. He was friendly and happy to talk to the many people that approached him.

6.    The speed at which the teams do everything is phenomenal. From having to assemble their cars, repair them, relay information back to the factories at the same time and analyse data. It’s not joke. And it’s fine to know it, but to see it being done is something else, entirely.

7.    This is something that you might have noticed if you’d been watching the post-race press conference at home as well. Certain questions that certain people asked Sebastian Vettel caused him to snigger. Jenson Button did laugh too. As did we. Honestly, how many times can you ask F1 drivers questions about India’s poverty? Only Fernando Alonso kept mum, and we suspect that’s probably because he didn’t understand the questions to begin with.

8.    If you stand still in the Formula 1 paddock, you’ll notice that you’re probably the only one doing so. Everyone there is busy with something – whether it’s the tyre technicians, the hospitality staff or simply the autograph hounds.

9.    Hand sanitizer seemed to be a big deal at the Buddh International Circuit. Everywhere we went there were people dousing themselves in the stuff.

10.    And, yes there was one dog on the track. There was a bat in the media centre one day. We don’t know how to make that sound better, but it wasn’t as bad as people made it out to be (the bat, at least).