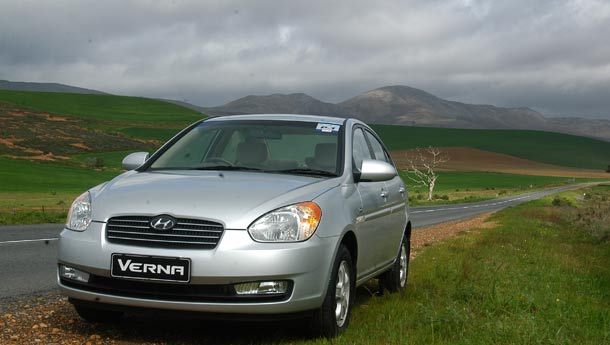 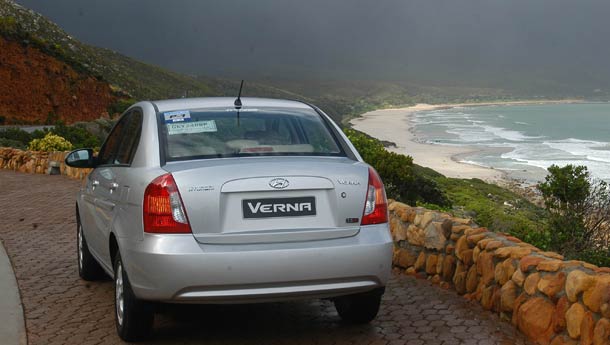 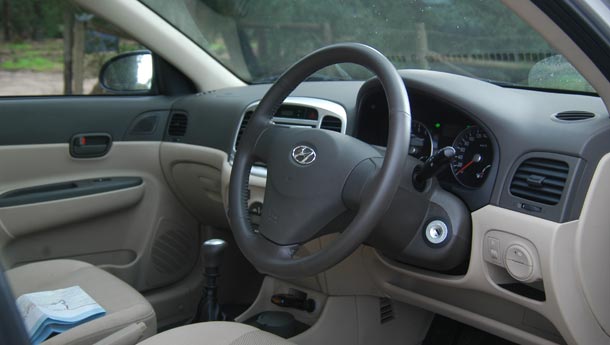 I am a history buff, but I didn’t know that the French had any bearing on South Africa’s origins. I knew that the Dutch, the Germans and the English had influenced South Africa’s past, but it seems that the French had a vital role to play in this beautiful country. But at this moment, all I knew was that the 315-km long route that was set up by Hyundai included a 52-km diversion to the Huguenot Memorial Museum at Franschhoek... which was to me, well, just an opportunity to drive the new Verna some more.

Yes, I was behind the wheel of Hyundai’s latest C-segment contender, driving on the picturesque roads of South Africa. For the second half of the 315-km loop, post-lunch, I had the Verna 1.5 CRDi. Perfect. The agricultural landscape of Caledon was spread on either side of the narrow road – it was as if God had just woken up from his slumber and was yet to fold the large, green carpets and make up his bed. The dark, rolling hills of Swartberg were in the distance with low grey clouds hovering above them, contrasting with the green that was closer to me. It was simply gorgeous.

The roads were empty most of the time and I had the turbodiesel Verna all to myself. The speedo needle was comfortably resting at 120 kph, with the one on the tachometer hovering around the 2500 rpm mark. And I knew that the motor, developed by Hyundai R&D in Russelsheim, Germany, had enough oomph to allow me to push the Verna even more – but I was taking it easy because you don’t see South Africa through your windshield everyday.

Displacing 1493cc, this inline-four (yes!) common-rail direct injection diesel motor features a variable geometry turbocharger. Is that good? Yes, it is – I will tell you why in a while. But check out the output first: 109 horses at 4000 rpm and 24 kgm between 1900 and 2750 rpm. Yup, over 100 bhp and a substantial 24 kgm. That’s better than what everybody’s favourite diesel car, the Skoda Octavia 1.9 TDi, manages and is close to the Laura’s own 25 kgm.

These figures will make the Verna CRDi quite a desirable car back home. And deservedly too. Not just for the gobs of torque that’s easily available on offer, but for VGT as well. A variable geometry turbine essentially features vanes that adjust to the exhaust gas pressure, which in turn depends on how much you are revving. Which translates to virtually seamless power delivery – you won’t find the turbo lag that characterises the Accent’s 1.5 CRDi motor, for instance – and better, smoother acceleration.

I had tuned the stereo to some random South African radio station that played some music I was familiar with. In between, when the FM reception faltered in spots, I could barely discern the diesel motor humming in the front. And the vibes hardly made it to the steering wheel, let alone to the rest of the cabin. It is remarkable how Hyundai cars are now significantly improved when it comes to build quality and better tolerances. The Getz, the Sonata Embera and now the Verna are examples of how the build quality gap between the Koreans and the Japanese has been substantially reduced.   The unpredictable weather in this part of the globe suddenly meant great, dark clouds and the pitter-patter of raindrops on the windscreen. I checked my map; I was on the right track after the right turn to Villiersdorp, and the T-junction to Franschhoek would be coming up any time now. There it was, in front of me, 26 kilometres of a road that will be etched in my memory. It was a stretch of tarmac that twisted and worked its way around the low Hottentot-Holland mountains, with the waters of Theewaterskloof dam giving it company for a significant section. Cape Town’s main water supply had submerged trees and God knows what else, so it was eerie, with the trees sticking out like ghosts, and the dark grey clouds descending like a doomsday prophecy. It was raining too much to pause and shoot some dramatic pictures for the magazine, and the way the road was winding in front of me meant that it was too tempting to stop.

The Verna’s motor was now singing and I was playing between third and fourth, exploring the turbodiesel’s immense flexibility, and dipping liberally into the stream of torque that was constantly flowing. The gearshift quality is positive, but it’s not one of those gear levers that you flick-flick rapidly. Still, the gearing was well matched to the diesel motor, extracting the power well enough to ensure you didn’t have to keep shifting it too often.

The hairpins and curves were getting tighter, and this was when I could actually feel the vast generation gap between the Verna and the Accent. The Verna is much more composed and taut than the car it has replaced in many parts of the world; it is well sorted and is much more integrated. This is best noticed when you’re straightening curves of different cambers, since you are confident enough to attack them at higher speeds. With an independent McPherson strut setup at the front and a coupled torsion beam axle at the rear, assisted by coil springs and gas shocks all around, the Verna is much more surefooted, while the degree of steering precision is a substantial improvement over the Accent. This car has certainly spent some serious time at Hyundai’s R&D centre at Namyang where... Slam! I jumped on the brakes immediately after coming round a blind corner and manoeuvred to the side of the road. A massive baboon (or was it a medium-sized gorilla?) was crossing the road with the practised movements of the original owner of the place. Across the road was the rest of its brood, in S, M, L and XL sizes, looking pretty nasty, with their long snouts and deep-set eyes. If not for the brilliant disc brakes all around with assistance from ABS, the Hottentots-Holland Reserve would have been one primate less.

Soon I was leaving nature behind and civilisation in the form of the town of Franschhoek was gradually making an appearance. I made my way to the Huguenot Memorial and Museum, parked the car and took an obligatory photograph. Ahead was a graveyard (the weather was suitably morbid), but I didn’t go in there or inside the museum. The 26-km road was beckoning me once more, but I did come back home and read about the significance of the Huguenots. It seems that these French Protestants were persecuted by Louis the XIV and the rest of his gang in the 17th century so much that they just left their country and took refuge in various parts of the world.

Many of them came to South Africa, where the already established Protestant Dutch community welcomed them. The French proved themselves to be worthy sons of the soil literally, setting up what they knew best: vineyards! So today, if ever you get to enjoy these South African wines, you know whom to thank.   In the first half of the drive before lunch, I had the petrol Verna. This 1599cc four-cylinder all-aluminium gasoline engine develops 102 bhp at 5500 rpm and 14.9 kgm at 3000 revs (yes, the diesel is more powerful!). This motor comes from Hyundai’s new Gamma family and features double overhead camshafts, four valves per cylinder and Continuous Variable Valve Technology, which the Korean maker has branded as VTVT. Also seen in the Sonata Embera’s Theta engine, this technology will basically help the Verna be frugal on lower revs while offering better overall performance when you’re revving hard.

In the morning, I never knew how gorgeous even the first half of our 315-km drive would be. Moving along in the light traffic of Somerset West, I looked around the Verna’s interiors. It was suitably modern, with its beige/dark grey dual-tone theme. The three-spoke steering wheel was grippy enough, while everything else was ergonomically placed. The interior layout of the Verna may not win any awards – it is conservatively styled to the point of being paranoid – but it’s the sort of zone you will be comfortable in even after a few years. Besides, the quality of the switchgear and the instrumentation is also quite impressive.

The R44 that we took turned out to be one of the roads that you see in foreign TV commercials or movies. With the Atlantic Ocean to our right, the R44 hugged the sides of mountains to the left. Picturesque doesn’t half describe this smoothly laid-out double-carriageway, which made its way past names like Gordon’s Bay, Pringle Bay and Betty’s Bay. The sun was trying hard to make it through the clouds, once in a while illuminating a section of the road like a gigantic Maglite.

Though the R44 had speed limits prominently displayed, there were spots where I could just not resist from letting go. The petrol motor revs freely – just as well, because to really enjoy this engine, you have to keep it at the upper reaches of the power band. But when you do that, you realise that the refinement levels of the engine are not that high, and in fact, it comes through as a bit rough and noisy. Also, Hyundai Motor India can look at adapting the gearing for India, keeping in mind our driving conditions, because you might just end up having to play around with the gear lever more than necessary. But on the highway, the Verna VTVT redeems itself. It attains 180 kph effortlessly, and is at its blissful best at 160 kph with the tacho needle hovering around the 4500 rpm mark.

Following the map, I passed through a town called Hermanus, where fishing and whale watching is big. It seems that whales come from the South Pole to the waters here. Looked like the whole town was doing just that. There were hardly any souls on the roads to appreciate this new car from Hyundai. Okay, the car’s styling won’t turn their heads, because like the interiors, and borrowing from Toyota’s design philosophy, the Verna is extremely conservative to look at. The only daring design feature of the car is that the side strips are placed higher up on the doors, while the stubby boot makes it look smaller than it actually is (by the way, the Verna’s wheelbase is more than the City, Ford Fiesta or Chevrolet Aveo). Overall, the Verna looks modern without putting off some people, unlike the Honda City, for instance. The roof arch leading to a thick C-pillar is its strongest feature actually, though the headlamps and taillamps make it look quite distinctive.

The roads opened up towards the halfway point of our drive at Caledon, where I would exchange the VTVT for the VGT. It was a fast highway section and with hardly any vehicles. With the engine settled in a busy buzz, it allowed me some time to think about the Verna. If Hyundai gets the pricing right, this car can do wonders – it has got everything going for it, in terms of all-round appeal, quality construction and even a brilliant diesel option. The segment the Verna is competing in is also showing fantastic growth, but the problem is how they will reposition the Accent – maybe something like what Ford did with the Flair, perhaps? Surely Hyundai won’t repeat the mistake they made with the Getz, where the initial price was higher than what people were willing to pay. So maybe it will be well-priced after all. By the time you read this report, Hyundai will have launched the car in India and the price will also have been announced. Hopefully, it’s competitive... In the meanwhile, if you will excuse me, I have some history to catch up with, accompanied by some fine New World wines that have a French legacy.