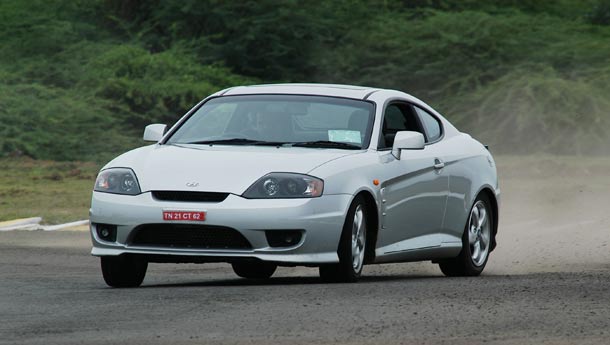 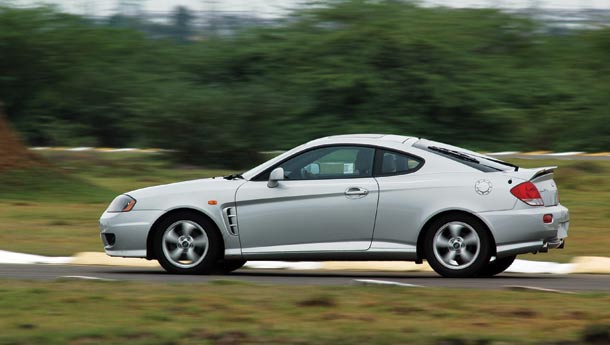 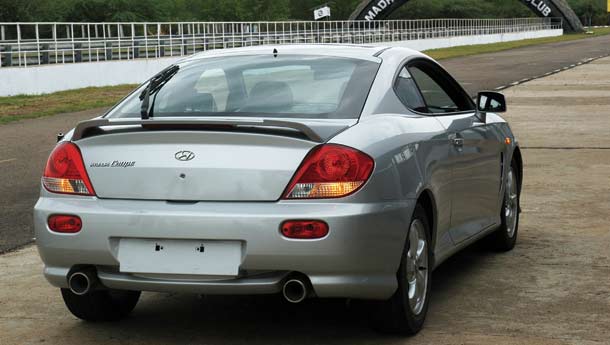 I tossed a coin before writing this piece. It was heads, and that meant Hyundai will eventually bring their Coupe to India. Seriously, that is as good a guess that anyone can have when it comes to HMI's plans for this lovely bit of engineering. They have not had it homologated yet, and if they do, the car can be bought to India via the CBU route for roughly the price of the new Sonata. Hmm... I can already hear the comments, 'You spend Rs 14 lakh for a car with just two doors?' Coming back to the point, why are we dedicating five pages for a car that has as much chance of reaching Indian shores as the Indian cricket team winning a one-day international final? Well, to begin with, we had great fun driving it around a racing track. And then, this is our humble way of telling the suits at Hyundai that there is more to selling automobiles than making money.


That 'more' is all about passion and a certain degree of dedication that is a must-have before producing a sports car. Add the magical word called 'pedigree' and you will get the Ferrari F430. Hyundai may not have much of a sporting pedigree (despite their WRC runs), but they do have the technology and expertise in making some extremely capable automobiles – and the Coupe, now in its second generation, is just one such machine.

On that note, let me take you back two years, straight to a cold and wintry day at the Namyang proving grounds, South Korea. It proved to be a stunningly cosmopolitan place, with people from various nationalities working on various projects. I met with Turkish designers, saw the biggest wind-tunnel this side of a twister, and for a nanosecond, laid my eyes on a sports car that was under development. The second-gen coupe was being tested and it looked, sounded and moved in the most fabulous manner possible. Hyundai knew that there were journalists from around the world visiting and they were, in all probability, giving us a fleeing glimpse of their upcoming sports car.   Well, the sports car came under the name Hyundai Coupe (or Tuscani for some markets), but it didn't create the same excitement as say an Aston or Lamborghini... neither did it beat the buzz created by Hyundai's own Santa Fe SUV and the last-gen Sonata that imitated Jaguar down to the meow. But it did sell well in developed markets such as Italy and Spain. Don't laugh, the Italian market is extremely important for Hyundai because the first Tuscani was the largest selling coupe in the land of Ferrari and Lamborghini. Now that you are still with me, you will want to know how the Tuscani compares with other sports cars, right?

Late July, I was down at the Hyundai facility near Chennai to drive the new Sonata (BSM, September 2005) and I made sure I had a date with the Tuscani at the track. Hyundai delivered, and so did Vicki Chandhok (FMSCI chief) who let me play at the Sriperumbudur track which is just across the road from the Hyundai plant.

Let me tell you, there is no better sight than an empty race track and a lone sports car waiting for you. The silver machine came loaded with a V6 powerplant that I had a full day ahead of me to come to terms with. Soon enough, the coupe was a streak in the track and I was attacking corners as if I was being hounded by a pack of bats. Fun? Even a bullock-cart would be on a proper racing track.

Visually, the Coupe has got the bits. If Hyundai got inspired by Jaguar for the older Sonata, the Ferrari 456 GT played the juice machine for the designers of the Korean Coupe. It does not have the squashed-bean lines of the car it replaced, and instead, sports crisp lines and a classic sports car greenhouse. The stance couldn't have been more perfect. The overall effect of the design is aggressive without being violent. Inside the car there is nice hide and lot of aluminium bits. The shift-gate, though not one strictly speaking, echoes the right stuff. The three-spoke wheel is just right on the hold and the seats and seating position imitates that of any Porsche. And yes, the notch-door opens up to reveal enough space to park a little Santro. Well, two golf bags for certain.   Turn the key and blip the throttle and the V6 does not hurt your ear drums. I could easily picture young Spaniards driving brand new Coupes straight to the aftermarket exhaust people. The test car had the 2700cc, 165 bhp V6 linked to an autobox, and that was a bit of a disappointment. That also means the Coupe is not exactly a quick car even by the new Sonata standards. It will do 60 kph in 5.2 seconds and will take all of 11.3 seconds to touch the 100 kph mark (compare that to the new Sonata's figures of 3.9 seconds and 7.9 seconds and you know what I am talking about). The car is also available with a pair of four cylinder engines, with the two-litre version delivering close to 140 bhp being almost as quick and much more affordable. The car tracked true in the straight and showed 190 kph before I took my foot off the drilled right pedal. The whole idea of a big-hearted engine is to be able to cruise at speeds above 150 kph easily and that the old V6 does very well. How fast would it go? Well, the manufacturer claims 245 kph and I think I can trust them.

That said, the heavy V6 lump came into play every time I chucked the Coupe into the hot-line around a bend – dead engine weight is a monster that makes otherwise nimble cars go wooden and that is true of this machine too. But when you do have vast expanses of autoroutes and expressways to conquer in everyday life, the additional power of the big six is important, I guess. The gross understeer apart, the cardinal dynamics of the Coupe is derived from its chassis which is perfectly balanced for having good fun – whether it be at your favourite mountain road or at a neighbourhood track (I had to travel close to 1,700 km for one!). With a great deal of provocation and patience, you can induce a degree of power oversteer, but that is not what you do to go quick around a track, right? After a few laps, things got better, as I was getting the hang of the car and was carrying the right amount of speed to ride the kerbs ever so lightly – but pray Hyundai, couldn't you import a car with manual transmission? In the same breath, a good word for the Kumho Powermax 769 rubber that the car was wearing on 16-inch five-spoke alloys. They proved deliciously adhesive – that means I could drift around without inflicting much damage on the tyre and the car. Nice.

So there, a brilliantly designed sports car at an affordable price. Bring it on, Hyundai. Isn't it a shame that we have an Indian roasting F1 circuits around the world but don't have single sports car worth the tag?