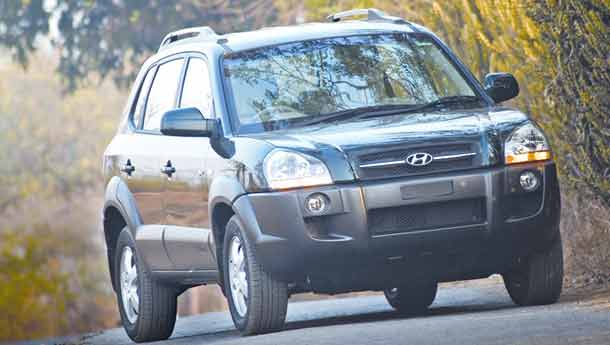 So you have saved up Rs 14-odd lakh for a brand new SUV and didn’t buy the Honda CR-V because it drank petrol? And you didn’t consider the Nissan X-Trail because you could buy a CR-V and have enough money left over to feed it petrol for a long time. You didn’t buy the Endeavour because it looked and moved like a truck. Well, then don’t even bother reading this entire road test report – the Hyundai Tucson was made after a few engineers took your measurements. So here it is and call it what you want – Urban Diesel Activity Cum Recreational Yet Fuel Efficient Vehicle sounds good to me but people may have trouble remembering UDACRYFEV.  Still, ‘DR-V’ looks like a brilliant chance missed to irritate some Japanese lawyers.


Toyota started the fire with the RAV4 and Honda followed suit with the CR-V. The breed of passenger cars on stilts that boosted the ego of SUV craving prospective buyers has not looked back ever since. BMW too joined the club recently with the X3 – another monocoque behemoth that is built, packaged and drives like a passenger car. So you won’t be surprised to hear that the Tucson has been inspired by the Austrian-built Beemer, right?

The problem is, I drove the X3 recently and was not very impressed by it. Essentially I didn’t get out of the X3 wagging my tongue, picking up my jaw from the floor and readjusting my eyeballs back into their sockets the way I did when I first drove the M3. Instead, the mental note was ‘oh, nice car and for an SUV, it goes around corners quite well’. So it was with trepidation that I drove the Tucson – the equation was simple, it had to go around corners well to beat the benchmark X3.

It didn’t take much time to find a decent piece of asphalt that snaked its way around the landscape. While the Tucson impressed me a great deal with its handling, it was very clear that it is not exactly ‘car’ material. And it was not the suspension setup that was the culprit – instead, it was the fact that the diesel motor was propelling the front wheels most of the time. You see, you can buy the Tucson in Europe with a decent two-litre petrol or an even bigger V6 engine, and the drive-line configuration with the logic-four wheel drive system is more suited to the smoother power delivery of petrol engines. In the case of the CRDi powered Tucson, all that torque (24.98 kgm of the stuff available at a pretty early 1800-2500 rpm) on the front wheels meant wrestling =with torque-steer rather than concentrating on the apex. The ‘intelligent’ Borg Warner system will send torque to the rear wheels if it notices any slip, but normally it is a front-wheel driven diesel. A fact that enthusiast owners will have to learn to live with.

Still on the powertrain, Hyundai has gifted their soft-roader with a four-wheel drive locking system that immediately makes the car track truer and more predictable around the corners. In my opinion, this feature alone makes it one of the safest, all-weather cars in its segment. The car does not feel as refined when driven with four-wheel drive lock switched on as compared to the 2WD mode, still.

Thanks to the Accent diesel, the CRDi nomenclature has become almost generic for common-rail diesel engined cars, and the two-litre unit chosen to propel the Tucson is similar to the one in the Elantra (a car that Tucson owes a lot to). The first generation common-rail system is a tad basic compared to those being used by Mercedes diesels today, but once things warm up and when the wick is turned up, it transforms to a stonking hardworker of a powerplant. It is nice to see how an engine-gearbox combo changes colours in different applications. While we found the Elantra easy to live with in town, the Tucson had to be coaxed to behave well in traffic – especially when a slow moving vehicle crossed your path just after you managed to get into third. The end result is far too many gearshifts to get from office to home on Friday evening – something not many of us look forward to, right?

Come Saturday morning, you will love the Tucson though. Once given some space to stretch its legs, the oil-burner shows its true properties and dismisses off 0-60 kph in 5.6 seconds flat, making it quicker than some petrol powered vehicles. 100 kph was achieved in 13.18 seconds (14.15 secs with 4WD lock) and we managed a rather comfortable 150 kph in overdrive before lifting off. That means the Tucson can shrink that highway that links your home to your favourite beach or hill-station. Brilliant. The 12.82 seconds time for the passing speed (80-120) shows that the Tucson engine delivers when it matters (read while overtaking). At highway speeds you can hear the 215/65/R16 Kumho Solus radials speaking in hushed tones.
While the McPherson struts up front and twin-link rear suspension offer a smooth (even soft) ride over good terrain, there is considerable body roll when faced with rough road situations – especially while attempting a slow speed pass over rock strewn terrain. (Ditto with the Getz – these new age Hyundais don’t like bad roads, really). We are not complaining since the high speed dynamics of the car is not compromised by those who tweaked and fine-tuned the Tucson suspension for our country.

In our hurry to get on with the test drive we forgot to check out the looks of the car. See it from the rear three-quarters and the Tucson impresses. The sloped roofline, chunky C-pillar with a Beemer kink, well sorted out bumpers and the twin-exhaust celebration make up this view. On profile, the X3 influence is even more pronounced, yet the abundance of matt-black plastic over the wheel arches and lower half of the car settles the issue – that it is a Hyundai for sure (remember the Terracan?). SUV genes filtered down from the highly successful Santa Fe can be seen in the flared front wings and the trapezoidal headlamp treatment. The fussy grille and cluttered bumper (aren’t round auxiliary lamps passé?) look like a deliberate attempt to complicate design. But admit it, overall the Tucson is a handsome machine and one that could have easily worn a Mitsubishi badge, if not a BMW one.

Inside there is more room than the CR-V and the X-Trail. While the seating position is brilliant, the car lacks the ergonomic finesse of the CR-V – despite the centre console that is angled to face the driver. Touch and feel of grainy plastics and upholstery is last-generation Korean, while we loved the shiny afterthought of a finish for the console surround. The instrument console is the result of someone going berserk with a compass – what else can explain the many semi-circles? Also on my crib list is the switchgear that would be at home in less expensive automobiles and the gear lever borrowed from the Getz. Raiding the parts-bin saves money alright, but in a product that looks so unique, it is not a good sight. A more sophisticated audio-system and automatic aircon are things that D-Segment cars offer these days and the Tucson will soon have to compete with an all-new Sonata that excels in these sort of things. That said, everything works exceptionally well in a very Samsung, LG sort of way.

There is no doubt in my mind that Hyundai products are becoming even more desirable. First it was the Getz and now the Tucson. More importantly, the Tucson is bursting into a segment that has witnessed considerable growth, and in that diesel motor, it has the right ammunition to go and battle it out with the likes of the Honda CR-V. And at just about Rs 15 lakh, expect the Tucson to be a runaway success.
If not, try re-naming it Diesel Recreational Vehicle.