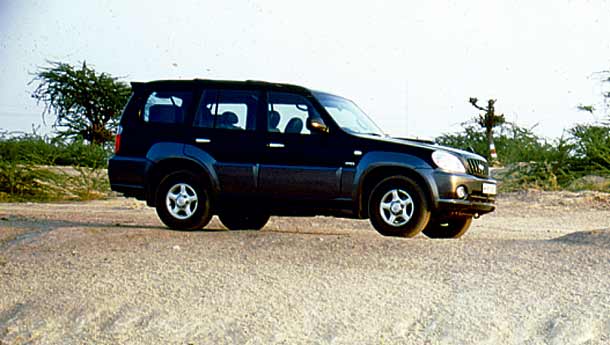 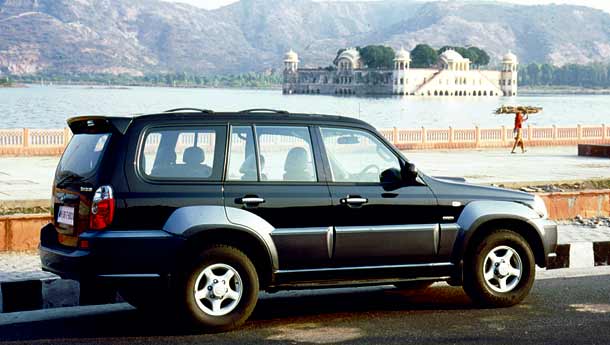 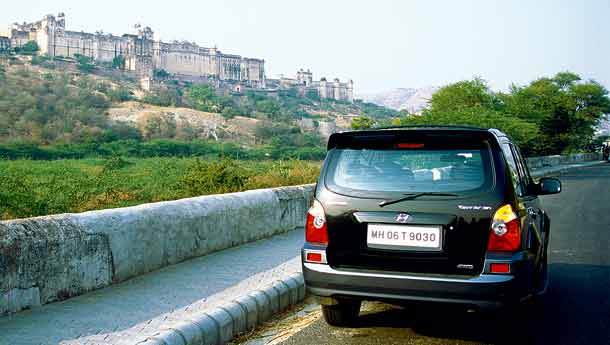 Curse the highways. Bless the highways. Curse them because construction of the Golden Quadrilateral is going on in full swing, which means heavy traffic and unexpected logjams. Bless them because the stretches which are complete are simply divine and they more than make up for the time you are stuck behind trucks. Picture this. We are returning from Jaipur and cross the Gujarat-Maharashtra border. From the road construction mess of Gujarat, the highway opens up to a clear stretch of dual carriageway blacktop that leads as far as the eye can see. It's late afternoon, the sun is throwing golden rays all around, Billy Joel is warbling through the 6-CD changer and the Terracan is blissfully cruising. It feels like heaven, traffic is light and we seem to be doing what feels like 100 kph. I look down at the speedometer... the tacho needle is fixed at a leisurely 3200 revs and the speedo is nudging 140 kph actually. I could extract more juice from that turbocharged common-rail direct injection if need be, but this is more than adequate. Even when I cut down on speed on those mildly-cambered curves, it's still at 120 kph that I am tackling them. I steal a glance at my travel companions – Pablo and Prashant – to see if the Terracan's mild body roll affected their comfort. But no, their eyes are blissfully shut, no doubt dreaming about those mind-blowing jalebis and malpuas they had at the wedding.

That's where this story begins. Our two-wheeler correspondent, that half man-half bike, Shubhabrata Marmar was getting married to one of our colleagues at Business Standard, Arti Sharma, in Jaipur. We could have booked train tickets, but hell, driving would be more fun. It had to be an SUV, that much we were sure of – a diesel SUV preferably. And what else could it be, but the Hyundai Terracan, definitely the best diesel SUV you can get in the Indian market today.   The main reason for that is a monster that barely can hide under the hood – hey, there's even a massive intake for the engine to gulp down air. Open the hood and witness what a changed animal a humble four-cylinder engine can be. The Terracan's engine is a common-rail direct injection turbocharged unit, displacing 2903cc to develop a healthy 148 bhp at 3800 revs and a neat 33.3 kgm of turning force. With that sort of an output and its massive bulk, you would think the Terracan could be quite a handful to drive. It's just the opposite.

The roads inside Jaipur are a driver's nightmare. Every conceivable form of transport jostles for the limited space that's available... and everybody is moving at cross-purposes and everybody is in a hurry. Chaos is too mild a word to describe Jaipur's traffic. In such situations, I appreciated the Terracan's well-spaced five-speed manual gearbox. It made perfect use of the power available on tap, keeping it a trickle at in crawl mode and flooding in an instant when you got a clean stretch and could actually floor the throttle. Remember, it has a turbocharged engine, and these are usually quite a handful to drive in low-speeds... not here, however, as turbo lag was hardly noticeable and once the boost pressure built up, it was not power delivery at a frenzy,but more controllable. This Hyundai engine is a gem, I would love to see it in the Sonata as well.   On the highways, the Terracan's generally ponderous nature – it has a tendency to wallow and pitch – takes a back seat and the suspension set-up feels a little more taut. Which explains why you can take corners at speeds in excess of 120 kph without losing your confidence or the SUV's composure.

The Terracan comes with a Borg-Warner four-wheel drive system with shift-on-the-fly. We thought we wouldn't have a reason to use it, but you know what, we did and it vindicated our decision to take an SUV instead of a D-segment car. On one of the innumerable traffic jams on the Gujarat highway, the only way we could break free was to get off the road, come down a fairly steep sandy gradient, skip some slushy sections and climb back to join the highway. Shift to 4L using that neat little dial, gently come down, skip the slush, clamber up again... leaving the rest of the cars and truckies watching with amazement. 4x4 seems to be the solution for traffic jams.

And as it usually happens in all Indian weddings, a big car is always of great use around. Which meant the Terracan did plenty of ferrying duties, taking people from here to there, and getting stuff from there to here. The two seats are the rear are foldable to make for plenty of luggage space, but when down, they can accommodate either two small adults or two large children, nothing more. But overall, the Terracan's immensely comfortable – it chews up distances without you noticing it, and you don't emerge tired even after an entire day's driving. It's a brilliant machine, and I can't wait to take it out for another long drive, highways or no highways. Ladakh and the Nubra Valley comes to mind. What say, Hyundai?