Hyundai Sonata vs Honda Accord vs Skoda Laura - The third dimension 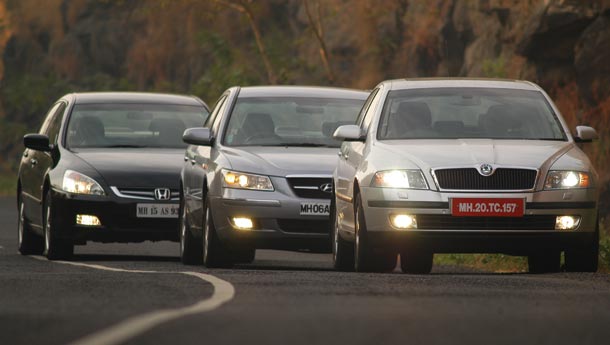 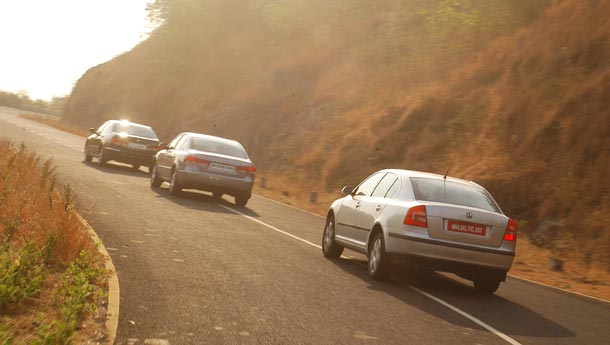 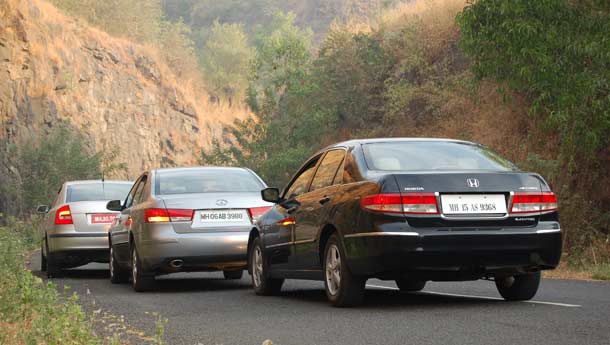 Throughout your life you have spoken your mind when given wrong choices – ‘Doctor or engineer?’ ‘Driver’. ‘Idli or dosa?’ ‘Chicken clear soup’. ‘Train or bus?’ ‘Jet airways’. ‘This girl or that one?’ ‘This boy’. Well, without getting into graphic character analysis, let’s say that you are the one who will say ‘Skoda Laura’ when someone asks you to choose between the Honda Accord and the Hyundai Sonata. And why not? The Laura is contemporary to look at, has new-age technology and er... a price tag that will send shock waves to Mlada Boleslav.

At Rs 17.5 lakh ex-showroom Mumbai, the Laura is an expensive piece of kit even for a die-hard diesel fanatic who wouldn’t mind drinking the stuff himself. The Accord is a lakh and a half cheaper and the Sonata even more so. There, the Laura is certainly no VFM contender. Since you are reading BS M, there is still hope – because we still think there are a few out there who want a Accord Vs Sonata comparison test with a Laura twist.

Park them next to each other and you immediately know that the Accord and the Sonata are the bigger cars here. The Accord represents modern-day Honda, where design has equal significance as what lies beneath the bonnet. The Sonata shows how mature Hyundai has become as a leading car maker. Its lines are flawless, its stance impeccable and the details up-to-date. The Laura, despite being small, makes its very own notchy-sporty-statement. To the untrained eye, there isn’t too much deviation from the Octavia that we have come to know and appreciate. But look closer and you will see one of the best examples of automotive evolution in slow motion. The grill is that much more slanted, the windshield has a sharper rake and the buttresses sweep back as in a sports coupe. The Accord is evocative to look at, the Sonata is all crisp and no-nonsense while the Laura is a subtle design statement that borders on the sporty.   We will let you decide which one looks the best, but given a chance we would park the Accord against a setting sun and admire the reflections of colourful clouds on its sheet metal.Inside, the Accord is the most comfortable and most spacious, followed closely by the Sonata. The Laura has very high quality materials all right, but it does not buy the same real estate the way the bigger sedans do. The instrument console and the dials of the Accord are built around the driver and the controls are intuitive and surfaces pleasing to the touch. The Sonata, on the other hand, compares well on the quality scale but the overall decor lacks imagination and flair. Don’t get us wrong – everything that the Honda offers the Hyundai does too, but it’s just that the resulting ambience is not enough to make you feel special. There is nothing to choose between the Japanese and Korean car when it comes to rear seat room – an area where the Laura, obviously, has some limitations. But for a notchback, the leg-room at the back is exceptionally good. If you want a cosseting and luxurious interior, then the Accord is the way to go while the Sonata will try hard and smile from a deserving second slot. If you want similar or even better comfort in a Skoda we urge you to find a low-mileage Superb at the dealer forecourt. You may just be lucky.The Sonata is the most powerful car here and naturally its 160 bhp can give spasms to the Japanese contender. But surprisingly, despite being equal on torque footings (19.5 kgm a piece), it did so by being ever so slightly quicker than the Accord to the 60 kph mark. The big Honda, despite a glaring bhp deficiency (141 only) came back and beat the unruly Korean to the 100 kph mark, again by the narrowest of margins. The Sonata engine is no match for the silky smooth iVTEC unit of the Accord, but it is a revelation nonetheless. The Laura proved to be the proverbial dark horse and managed a sub-5 second time to 60 kph and stunned us with a sub-12 run to 100 kph – phenomenal, we say, for a diesel rig. But it shouldn’t have come as a surprise since the Pump Duse motor churns out close to 25.49 kgm of torque from 1900 clicks onwards.

On the high speed stakes it is the Honda that quietly does the job of touching 200 kph, while the Sonata reaches saturation point at around 215 kph. The composure of the Sonata at such speeds suggests some serious work in the wind-tunnel. The Laura is  pretty good in this area and  manages a healthy 210 kph nonetheless.   What is a BSM comparo without dealing with the all important FTD (Fun To Drive) factor? What the cold numbers won’t tell you is the fact that it is the diesel powered Laura that is the most involving car to drive. Mind you, not the quickest, nor the fastest... but more involving to drive nevertheless. Bagfuls of torque at launch, a phenomenal sensation of lag-followed by-grip (which we had talked about in the February 2005 road test) and an agile monocoque that is eminently flickable makes driving the Laura something to look forward to. Sure, we could have done away with unnecessary vibes, especially when the motor is cold, but still. The front end of the car is heavier and that along with natural torque-steer of a front-wheel drive diesel means a sloppy dynamics menu, but inch-perfect steering and grippy rubber level things out.

In the Sonata you feel you are the underdog. At least I did as I tried to chase down the Accord. Great gearing allows you to be on the tail of the Accord till you hit winding roads. Now, a spirited driver can still carry revs into corners as long as he or she knows the laws of physics. The problem is, a rather neutral steering fails to let you know the thin line between being in full control and a massive understeer attack. Less so with the Accord, which lets you be stupid and mildly spanks your bottom before letting you get back to the intended trajectory.

A fast diesel driver is a phenomenon that we have not seen enough, but with cars such as the Laura that will change soon. The Sonata certainly occupies middle ground and one that you can entrust your driver with, knowing fully well that it suits his skill level. The Accord offers the best of both worlds – it can be as involving as a movie you are forced to watch till things liven up in the second half.

Alright, it is time to stick our necks out and pick a winner. If you want maximum car for your money, then the Sonata is where your search should start and end. You won’t repent your decision for years to come. The Accord, on the other hand, justifies the additional money you shell out with superior design, comfort and dynamics. And it is the winner of this shoot out.

So should you pick up the Laura instead of the other two? Did we hear you say that you believe in forms of mass-transportation?BSM