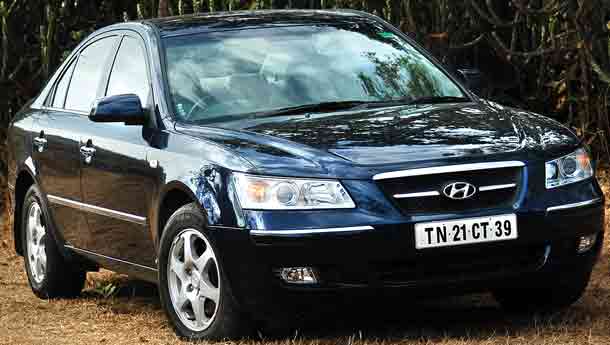 You couldn’t have missed the Mileage Run story elsewhere in this issue. One of the rules that we had for this unique, first-of-its-kind event was that car makers were allowed to enter only two cars. Hyundai entered in the 1200-2000cc petrol category with the Verna and then decided to fight it out in the crowded SUV/MUV open class with the Tucson. They had also brought along a dark blue Sonata Embera diesel which they didn’t enter because with an engine close to 2000cc displacement, it stood little chance against the likes of the Ford Fiesta 1.4 TDCi. Fair enough, we told the folks from Hyundai, and asked them whether Team BSM could drive the Sonata for the event – just to understand the car better.Before we knew it, we were on the 450 km Mileage Run loop, chasing up and down the competing pack of cars and generally having a blast of a time. The Sonata proved to be an unhurried, relaxed, calm cruiser that could do 80-100 kph an entire day without missing a beat. Sure, she was not participating in the event and we were not driving in any manner that would have ensured maximum mileage, but the Sonata fuel gauge refused to believe that – and I wouldn’t have been surprised to see it beat some quality competition with a figure close to 18-20 kpl if it was entered officially. Needless to say, we were pretty impressed and got the blue car back again for a full test and some quality time driving it.

On the looks front, the only bit that differentiates the diesel is the subtle CRDi badge. Otherwise the handsome, uncluttered Audi-ish lines of the Sonata are retained. After seeing many on the road, I have got to say that the car looks the best seen from rear three-quarters – complete with twin pipes. I am sure Alfistas amongst you would have noticed the taillamps in particular. The car is so big in real life that even a dark shadow can’t make it look small. Exceptional fit and finish and narrow panel gaps announce that it is a modern day Hyundai – second to none on these matters.

In the interior, the quality story continues with well-stitched together leather, excellent faux wood (inspired by the S-Class, no less) and classy surfacing details. I love the ‘mercury-drop’ needles during the day but it is quite unfortunate that in the night the dashboard turns into a mismatch of colours – don’t you think green digital displays are very ‘80s? But there is space and an abundance of it. Hyundai may be selling a large number of Sonatas to first time car buyers in the US, but in India, this is certainly a chauffeur-driven limo and more so with the diesel.Don’t know whether you remember – the inline-four petrol powerplant of the Sonata had impressed BSM staffers a lot during its early test days. It was an engine that made us rewrite our database on expected performance from Hyundai cars. Does the diesel match up?

To cut a long one short, we are familiar with the diesel motor powering the Sonata now. It shares the same block with the diesel engine that propels the Elantra and the Tucson. But power is up to 142 bhp at 4400 rpm and it develops a healthy dose of torque of 33 kgm between 2000 and 2680 rpm. The additional power has come from aggressive fuel injection mapping and the overall weight of the car deserves every ounce of it.

Given the boot from the word go, the Sonata can manage a 60 kph run from standstill in 5.3 seconds. It could have been better if the engine would rev more in the first gear – as it stands, power tapers at
41 kph. Second cog is good for just 81 kph (these are in-gear speeds that can be matched by the small hearted Swift diesel, you see) and a nifty shift to third without dropping revs results in a 11.8 second run to 100 kph. Once above the 80-100 kph mark, and the turbocharger having cleared its throat properly, the Sonata CRDi can surge to 120 kph in third and max out at around 190 kph. Does it feel a tad underpowered? I would say it is more of a gearing issue than power issue. You see, this engine develops a great deal of torque in any case but the gear ratios are meant for Expressway, autobahn cruising rather than the signal light grand prix – that is where I do have an issue with this machine.

Driveability in most conditions is alright but you sincerely wish it was an automatic in bumper-to-bumper traffic. The six-speed gearbox, and especially the sixth gear (fifth gear is also an overdrive), is a luxury that you will never use inside city limits. Those who are employing the services of a chauffeur won’t have to worry much about changing gears every now and then, still. Alright, it is a powertrain that is adapted to the Sonata rather than custom-made for it, but what we should not take away from the car is its ability to impress you as a whole. To begin with, ride quality is very good at any speed. I had rear seat passengers telling me not to return the test car because they were pretty comfortable travelling at the back. The car is not ruffled even when subjected to a series of bumps and potholes at speeds well above 80 kph. And when the roads are good, there is a certain fluidity to the proceedings that we seldom find in Japanese cars. This Hyundai not only apes a German car but rides like one too.

As we said before, the Sonata CRDi is not an athletic car bought for on-the-limit driving enjoyment. For a car of its size you expect near neutral handling and that is exactly what you get out of it. Mind you,
the double wishbone setup at the front and the multi-link rear are very forgiving to the mistakes you may make. Powering into corners and carrying decent speeds around them is possible, but you really don’t want to provoke the car and get into handling-by-rubber mode. At this point let me also alert prospective buyers that keeping the Kumhos properly filled is important for proper handling. The additional weight
and the torque of the motor did play truant with our test car before we got the front tyres filled to the spec.
During our test the Sonata was subjected to some very high speed runs and of course the above-mentioned Mileage Run duty. The car returned an amazing 14 kpl after all that and I think that can be easily improved upon if driven with the intent of stretching the litre. Now, apart from the much more expensive Skoda Superb and Laura, there is no competition whatsoever for the Sonata diesel today. And anyone who is about to buy a D-segment car for extensive inter-city use should find the prospect of a 900-km plus range from a full tank interesting.

And those who sign on the dotted line and decide against the established brands will also get to discover the giant strides made by Hyundai as an automaker over the years.