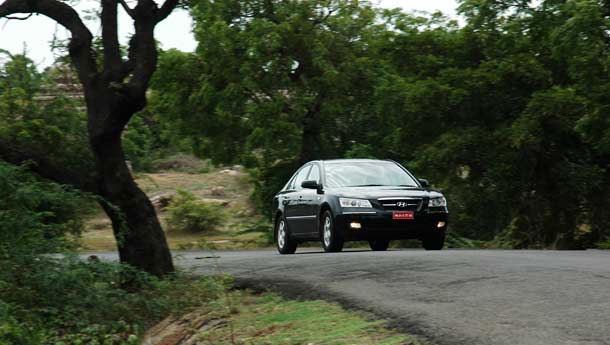 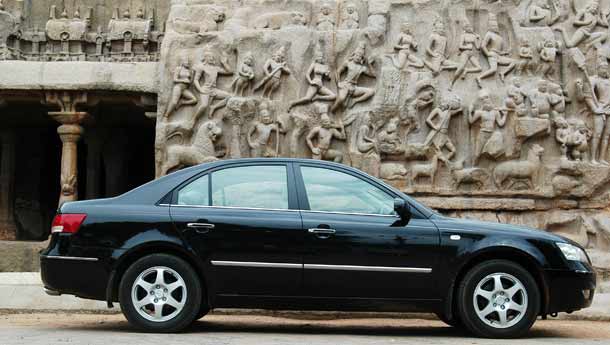 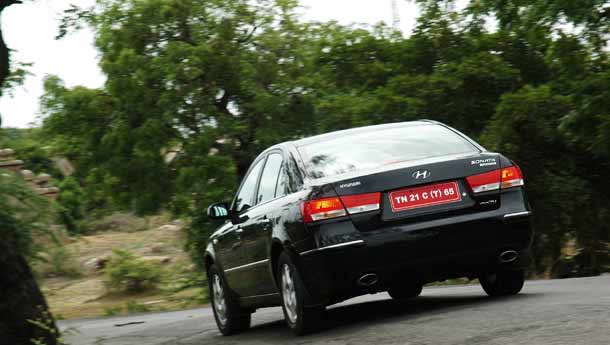 Numbers first. Zero to 60 kph in 3.9 seconds. 100 kph in 7.9 seconds. Top whack of 215 kph. Like what you just read? Now brace yourself so that you don't fall off your chair, because those numbers were returned by a Hyundai. And we are not talking about the new Tuscani coupe endowed with a V6 engine.


Actually, as part of an elaborate scheme to have fun, we drove the Hyundai coupe with an auto'box around a race track, and the poor thing was not as quick nor as fast as the four-door sedan you see on these pages. Sure, the coupe had more cornering grip thanks to a sporty, sorted-out chassis and better rubber, but that is another story for another day.

The point here is, the new Sonata is fun to drive! Now that you have fallen off that chair and broken an arm, read on. Well, it certainly is fun to drive compared to the last generation Sonata which came close to fishing boats in terms of ride quality and handling. Really, this new car could have been badged a Nissan, a Toyota or – this is almost treading into sacred territory – even a Honda. And we would have given it a distinction without even a proper test. Since it is a Hyundai and since I am still sceptical of LG washing machines, I decided to drive the wheels off a new car that rolled out of the Indian plant to find out.   Let us begin from under the bonnet. Hyundai now has variable valve timing technology and I am certain that this 2359cc DOHC 'Theta' engine came with the blessings of Mitsubishi who have been inspiring Hyundai technology over the years. This CVVT unit will not be as unflappable as say the V-Tec engines of Honda, but it produces a healthy 161 bhp and 22.5 kgm of torque – figures that are better than that of the Accord 2.4. It is eerily silent at idle, but more throaty and metallic than V-Tec motors on the move. But what it does to those unsuspecting Kumhos every time you bury the throttle and drop the clutch is not printable in a respectable publication. The front wheels spin in disbelief, then catapult the car – which endures a bit of scuttle shake – to three-digit speeds well inside eight seconds. So there, it is not as refined as you would expect it to be, but it certainly packs more punch than any four-cylinder engine you would come across in our country. All those rich kids with Skoda Octavia RS toys beware – this Hyundai, driven by a grandfather, may just humble you at the signal light.

Power it into the first corner you come across, and the Sonata gives you an instant crash course in understeer before taking the direction dictated by the steering wheel. And that brings you down to earth. The earth is round, and front-wheel drive sedans don't like too much torque too early in life. There is a certain degree of body roll that reminds you that you are not driving a modded Jaguar X-Type on bling-alloys and low-profile tyres, but nothing that warrants an angry e-mail to the Namyang R&D centre. Yes, the steering could have been sharper, and given a chance to change one thing in the new Sonata, I would trade the pseudo-wood clad steering wheel to something three-spoked and sportier.

Ride quality at almost all speeds is good and exceptionally so over rough roads. The 'lifted' suspension handles speed breakers easily, though the car still manages to look low-slung. At cruising speeds (a difficult proposition with this manic motor, but possible in the more benign automatic version which we sampled at the factory), the dynamics of the new Sonata can be termed as good as any car in its league. Yes, the Camry isolates you from the surroundings more and the Accord  is a tad more refined, still.   So it has a power-monger of an engine and decent road manners. What more do you want? Yes, the looks. The new international styling of the car is a big hit back home in Korea and even in the United States. According to Param, who took the pics you see here, the new Sonata looks narrower than the older car, though that isn't the case. And that could be a bit of a worry for Hyundai, since the Accord and Camry manage to fill up the driveway nicely. That said, she looks bigger and more substantial in white. As for the design, I think Hyundai has played it extremely safe after their rather controversial face-lift for the last generation model. It is well formed, sophisticated, has the right bits and pieces, and is more European than Korean or Japanese. But hasn't Audi moved the European benchmarks with their recent cars?

The interior fit and finish is unquestionably good, and even has a plasto-wood panel inspired by the S-Class Merc. The twin-tone dash is textured well but is not exactly ergonomically correct – the entertainment console on top of the aircon vents is the biggest culprit here. The 'mercury rising' theme of the dials and needles is a nice touch, but the designers lost the plot as they tried and illuminated it with bright colours. Also, the on-board comp that tells you the range and other trivia is borrowed from last-gen Hyundai cars.

So here is the million Won question. Is the Sonata a better buy over the Honda Accord, or for that matter, the Toyota Camry? Now like all good, greedy motoring journalists, I would say I'd rather wait till I put these cars together in a shoot-out. Since a road-test report without a verdict is as pointless as a fully-clad Mallika Sherawat, here goes. The old Sonata is dead and the new Sonata is brilliant in many parts. It is comparable to the Accord in many ways and that in itself is a big compliment. And no, the overall build quality, finesse and refinement level is not yet comparable to that of the Camry. And unlike the small cars churned out by Hyundai in India, this D-segmenter will need a bit of help from the manufacturer when it comes to pricing. I am certain that Hyundai can price it on par or slightly below what an Accord sells for, and that should be roughly Rs 13.5 lakh – with those numbers on the price tag, the new Sonata will be blistering value for money.