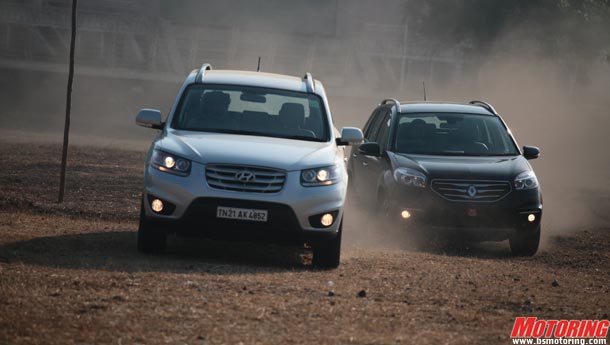 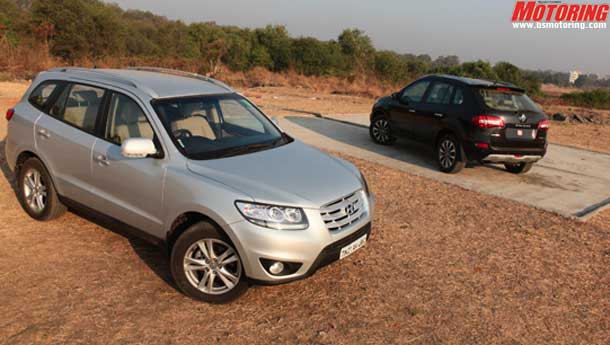 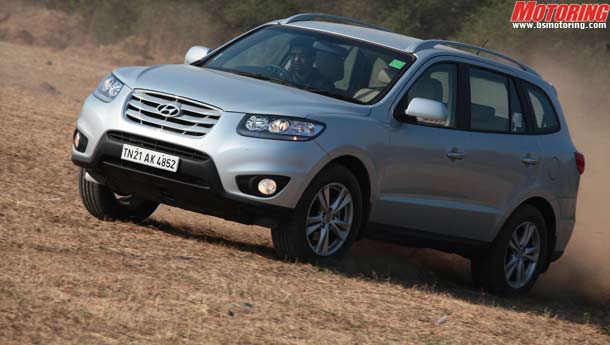 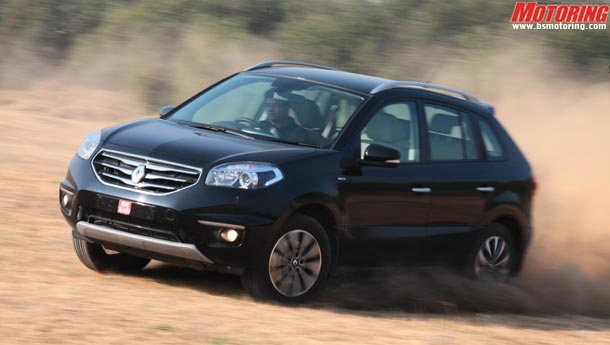 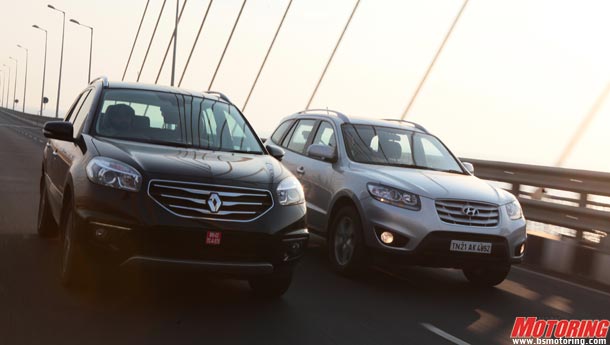 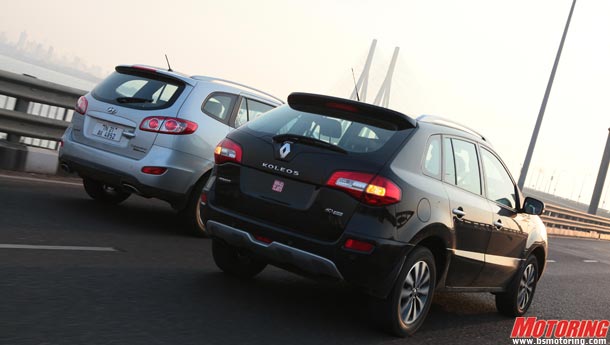 Since the world of SUVs is clearly, if not firmly, divided into monocoque and body-on-ladder vehicles, it should be simple, right? Far from it, since these days it’s a bit more than just that. There are urban compact SUVs, hardcore off-road SUVs, SUVs that boast of luxury levels that can make the Rolls-Royce Phantom blush or SUVs that pretend to be some sort of pseudo-coupe four-seaters. And we are just scratching the surface as there are many more sub-segments out there and some more in the making. So where do the Hyundai Santa Fe and the Renault Koleos fit in a mad, mad world, you ask?

Think of them as soft-roaders that boast of some amount of off-roadability and most importantly a diesel motor under the hood. Nothing earth-shattering by any stretch of the imagination, but the fact that Hyundai hasn’t been able to capitalise on the demand of the Santa Fe for one reason or the other has meant Renault couldn’t have stepped in to the segment at a better time. Or has it?

For Hyundai has a CKD operation for the Santa Fe lined up and not too long ago it introduced the automatic version as well, which you see on these very pages. Time for a jousting match, don’t you think?

The Santa Fe has impressed us, not just with its capabilities but the fact that it is a decent-looking SUV. The Cayenne-esque design cues and proportions make it look larger than it actually is. The Koleos is tauter, more athletic in comparison, thanks to its Nissan X-Trail roots. The facelift that was first revealed in 2011 with the launch of the Koleos in India also included bits like the Bose kit that... ahem, is self-explanatory, but there are also those carbon-finished wheels as well! Placed next to each other, the Santa Fe makes the Koleos look decidedly compact. Yet the Koleos has some clever little design features – like the split tail gate and some rather classy-looking tail-lamps. Importantly, Renault’s interpretation of the same platform is far less boxy than Nissan’s effort and that does make it a proverbial slot machine of sorts. The Santa Fe’s quirks? A rather strange handle for the tail gate is all I can think of.

If it’s space that you need then you should be driving home in the Santa Fe and skip to the performance bit, but wish life was as simple as that. The Hyundai’s three rows not only mean more space for seven; if you fold down the last row, you get a lot more space for your luggage as well. While the last row is strictly for those who are in pre-secondary, it’s still useful. You also get more leg space in the middle-row than on the Koleos and that’s a big plus too.

The Koleos, however has the richer interiors of the two. The interplay of surfaces and textures is rather interesting and makes it more appealing to the eye as well. Yet, some quirks remain – like the stereo which continues to be counterintuitive in logic if used from the centre console, but it’s not so bad if you fiddle with the pod behind the steering wheel. But it’s the overall feel and usability of the controls that will leave you satisfied, especially the air-con, even though the air-con isn’t as effective as the Santa Fe’s, mind you.

The Santa Fe’s interiors feel more traditional, what with the large, block-ish centre console and the ever-so-large buttons. Some of the plastics, especially on the lower half of the dash aren’t up to scratch and that takes away some of the pleasure of sitting behind the wheel. While the Santa Fe is well-loaded, it’s strange to find no Bluetooth function here, especially since it’s offered on even the Hyundai i10. You do get a six-way electrically adjustable seat for the front passenger and electrically adjustable lumbar support for the driver – the latter is manually adjustable on the Koleos.

Despite weighing nearly 250 kg more, the Hyundai Santa Fe’s biggest trump card is its power output. From a 2.2-litre, long-stroke diesel motor, it produces a very impressive 190 bhp and a staggering 44.65 kgm of peak torque from as low as 1800 rpm. Compare that to the Koleos’ 150 bhp@4000 rpm and 32.6 kgm@2000 rpm and the Santa Fe outpaces it even on the power-to-weight and torque-to-weight charts. This does translate into superior performance on the road as well.

The Santa Fe’s six-speed automatic gearbox helps matters here. Because it is fairly quick both on the downshifts and upshifts, it hits the 100 kph mark less than half a second shy of its manual-toting brother, just above 10 seconds. The mid-range too is pretty strong and it never seems to run out of steam, even at the top where the Hyundai’s motor becomes rather relentless. At the very bottom end, the combination of sweetly selected gear ratios and a well-tuned variable geometry turbo makes matters very good indeed, an ideal SUV even around town. A top speed of about 190 kph is a gratifying experience too.

The Nissan-sourced motor on the Koleos does feel particularly zingy in the X-Trail but lacks the soul and character in the Renault; blame it squarely on the automatic gearbox. As a result, it’s rather slow on the downshifts and serious progress can only be made if you decide to manually shift in tiptronic mode. As a result, the engine feels strained, especially at the top end, and doesn’t seem to have much by way of performance post 150 kph. The performance numbers reveal a time of over 12 seconds to 100 kph and a mid-range time that gives the Santa Fe a huge lead here as well. It does, however, benefit by way of fuel efficiency, returning 9.5 kpl overall to the Santa Fe’s 9.1 kpl.

You would be surprised if I tell you that the Santa Fe is the best-riding and handling Hyundai on sale in the country today. Yes, it’s an SUV for crying out loud, but it does seem to be the most sorted among all its brethren. The ride quality of the Santa Fe, which left us suitably impressed back then, continues to do so even now. Yet, you can’t help but find a level of underlying stiffness that does tend to detract from the driving experience ever-so-slightly. At low speeds, it’s a bit more pronounced, though it nicely settles once speeds rise.

Renault, which is best known for its ride-quality, continues to fly the flag high with the Koleos as well. There is a certain degree of suppleness on offer, even when the roads get really bad. The odd expansion-joint does cause a few thuds, but the maturity in ride can be felt over a wide variety of surfaces.

Both SUVs handle well, but it’s the Koleos that uses its smaller dimensions and weight to its advantage. Despite a steering that hasn’t much by way of feel, the Koleos feels nimble and goes cleanly around corners, while exhibiting a smidgeon more poise at high speeds. The Santa Fe turns in well and also has a bit more steering feel, but isn’t as happy to go at full tilt around decreasing radius corners.

The Koleos is a decent SUV with all the entrapments of a premium vehicle, a good ride and handling setup and attractive looks as well. However, it isn’t as practical, doesn’t offer as much space and lacks the performance credo of the Santa Fe. It’s a good SUV, but not a great one.

Not that the Santa Fe is exceptional either, but in this company, it comes across as the most rounded one. It ticks most boxes, leads in many areas and even in those that it comes second, the gap isn’t much. Despite the slightly higher price tag, it pretty much retains the crown. There, it isn’t complicated anymore.