Hyundai releases teaser of All-New Elantra: Quite a Looker!

Hyundai’s D-segment offering, Nex-Gen Elantra, has been teased for the first time in the shape of a digital rendering. Though the manufacturer is tightlipped on the official reveal date, it is expected to happen at the Los Angeles Auto Show slated for November. The Indian launch will only take place next year, probably at the Indian Auto Expo 2016. 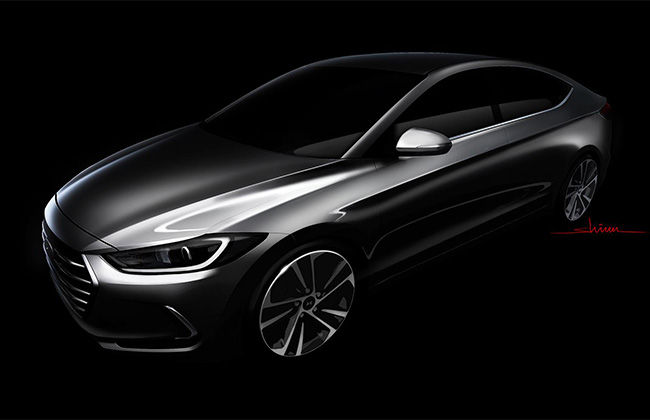 The teaser image largely focuses on the side profile with a front-end partly visible, enough to give an idea of the future design mindset of the Korean car giant. It seems to have washed away the image of the already sporty Elantra and appears to have upped the benchmark, at least in the exterior design terms. The car screams elegance with a foray of character lines running on the long bonnet, shoulder line and bottom side-line. Moreover, the front carries angrier headlamp alongside a gapier front grill, while the sides depict diamond cut alloy wheels-going well with the coupe-like roof line.

As for the insides, so far there are no updates, but teaser images could follow soon. They are expected to get 8-inch infotainment system, start/stop feature, dual zone climate control, heated/cooled front seats, panoramic sunroof.

Speaking of the engine, Hyundai is expected to put in a 1.6 litre 175bhp T-GDi motor (petrol) for foreign markets, while the Indian spec car should retain the same from the current Elantra.

The chassis of the 2016 Elantra is said to comprise 53% high strength steel and the drag coefficient is believed to be 0.27, making it one of the most aerodynamic in this segment.