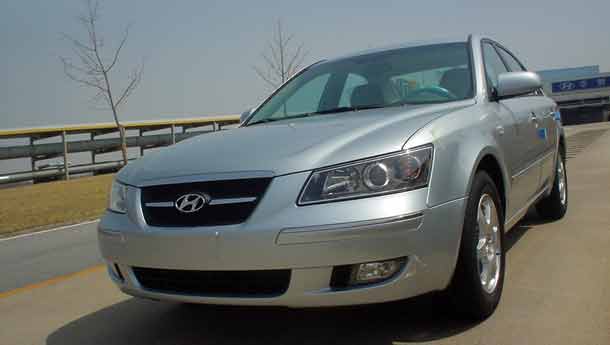 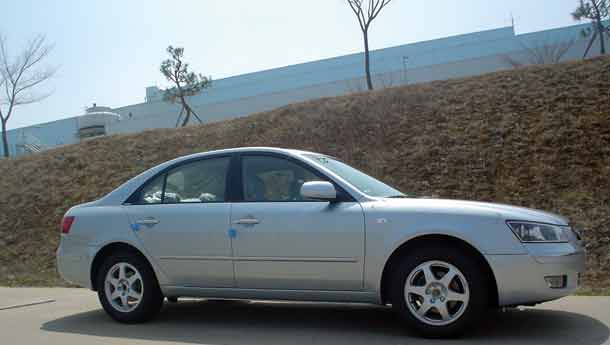 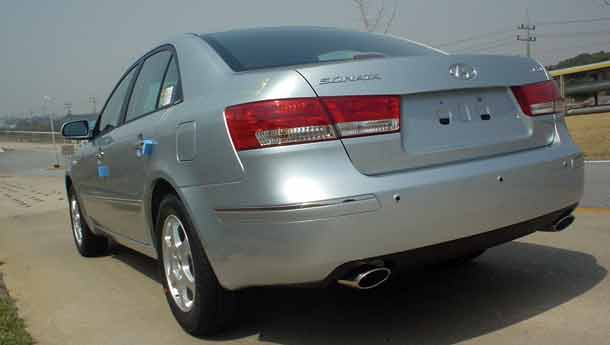 The Honda Accord and the Toyota Camry may be doing a duet in the premium D-segment on Indian roads right now. But very soon we’ll have a chorus, as Hyundai’s all new NF Sonata also joins in. The opening lines of the song, however, are being written by 300 robots at Hyundai’s Asan plant in South Korea.


While vacationing in South Korea in April, I had kind of got attuned to the lazy and actionless city that Seoul is. Since the people’s lifestyle there seemed to be quite slow-paced, I was forever in search of some excitement – but well, I guess Seoul was hell bent on boring me. No, I don’t mean there were hardly any cars around – it’s just that there were no eye-popping, spine-tingling cars.

It’s only when I spotted the new Sonata on the roads one day that I felt a bit excited. In the first instance, it looked like a car which was quietly confident in almost everything, be it class, style, character or form. I couldn’t wait for my visit to Hyundai’s plant in Asan, which is about a 90-minute drive from Seoul. Yes, I was going to check out the new Sonata there.

While I was waiting to be picked up that morning, I was hoping against hope that the Hyundai official would come and say, ‘Ma’am, here are the keys. The new Sonata is all yours to drive... all the way up to Asan’. But like all other pipe dreams fairy tales, this one also met with the same fate. I was instead driven to the plant in the new XG, Hyundai’s S-Class sized luxury sedan. If Hyundai wanted to impress me with the XG, well, they sure did, considering it was as big as my flat back home in Mumbai.   After a brief powerpoint presentation on the plant (spread across 240 acres, 2,500 workers churn out 300,00 cars every year...), I was taken straight to the test track, which is where I got up close and personal with the new Sonata. I also got a chance to see whether first impressions are really the last ones, but I’ll save that verdict for later.

The new Sonata is no doubt a refreshing change from its predecessor. It’s not just new to look at, it also makes an all-new statement that is very corporate. In other words, refined and slick. It’s closer to what Japanese sedans look like – unlike the current facelifted Sonata, which is, to put it mildly, very Korean in its looks. But Hyundai can’t afford to go wrong with the new Sonata, as it is their volume driver and the flagship model. And of course, it is Hyundai’s truly world car, being sold in most places they operate in.

As far as looks go, Hyundai is a bit more flagrant about borrowing styling cues this time. If the outgoing Sonata is the result of a romance between the Mercedes C-Class and the Jaguar S-Type, the new Sonata looks like the Honda Accord and Audi A6’s offspring. The rear contour (especially the taillamps) of the new Sonata is so Accord, they can easily pass off as twins. Similarly, the headlights are clearly Audi’s. The side and the front panels, however, don a sharp and handsome look, a break from the current round and bulging profile of the car. Also, Hyundai has been brave enough to abandon one main identity of the Sonata in India till now. Yes, we are talking about the hood ornament which was borrowed from the previous generation XG. But you never know, it might make a debut in India!

Inside, the generous space in front allows you to do your stretch exercises while driving – not that I recommend you do that! And it does not mean that the fellow passengers in the rear seat cramp themselves. In fact, the surprise package is the space and the legroom in the rear – I felt it was comparable to that in the XG. The wheelbase has been extended by 30 mm, you see. So don’t be surprised if the new Sonata just drives away with the ‘most philanthropic’ badge, leaving the Accord to be a runner up, though the Camry could be a close call.   Interiors are a vast improvement over the earlier model. They are less cluttered, well-organised, ergonomic and almost European in layout – a little bit of A6 influence, perhaps? But it has just the right-size and the right number of cubbyholes. The round airconditioning dials donning a matte finish add to the sophistication of the car. Of course, one regret is that the passengers sitting in the rear seat have to just live at the mercy of the front-seaters, as there are no airconditioning vents at the back. Who knows, maybe Hyundai may engineer this feature to beat the Indian sun? But even though the interiors are simple, elegant and well-placed, I felt that they looked a bit plasticky, especially in a car that’s competing in the luxury segment.

Now for the substance. The new Sonata is much more powerful than the outgoing model. It owes its sprightly performance to the new ‘Theta’ 2400cc 4-cylinder 16-valve DOHC that features continuously variable valve timing. Of course, the 2700cc V6 may make an appearance in the new Sonata later in our country. The Theta motor develops 160 bhp at 5800 revs and a maximum torque of almost 23 kgm at 4250 rpm.
As against this, both the Accord and the Camry are around 142 bhp, from four-cylinder engines with similar displacement. It looks to me that Hyundai clearly wants to be a bit more competitive, at least in the power stakes and I sincerely hope the output figure does not suffer after homologation. The Sonata’s engine is mated to a four-speed automatic which features Hyundai’s Shiftronic manual override system. Of course, a five-speed manual is also on offer.

I had the automatic version to check out at the expansive Asan test track. The Sonata was quick off the block, and the engine felt quite refined. I managed to do some spirited acceleration runs when Hyundai officials were not looking. Here go some numbers – the new Sonata touched 60 kph from standstill in five seconds, and attained the 100 kph mark in 10 seconds flat. Not bad for a large car like this. BSM road test data says it is comparable to the timings recorded by the Accord and the Camry’s. Trust me to get hold of the manual version when it comes to India and better those figures.

Hyundai seems not to have compromised on the suspension settings of the new Sonata. Double wishbones at front and multi-link at rear, with coil springs and gas-filled dampers at both ends. On smooth sections of the test track, the Sonata offered a cossetting, almost luxurious ride. And it did a decent job of smoothening out the rumble strips I took the car over. Interestingly, the Hyundai official very confidently told me to just let the car go when I hit the alignment track and I followed his instruction to the T… but HA, my car did not! It got lost in its own melody, swaying from left to right. I guess it would get a red dot on the steering wheel, which means it goes back to the plant for steering and wheel alignment.

In short, my visit to Asan was quite an eye-opener. I can tell you with conviction that Hyundai is a very large company that is bent on building a lot of cars. I can also tell you that the new breed of Sonata drives, rides and handles better than the previous model. As the XG sped back to Seoul, I had new respect for South Korea and its people. They may not be as fast-paced as I thought – but the cars they are building are certainly setting the pace around the world. Watch this space for a proper road test.