Hyundai Motor India Limited (HMIL) has become the first car manufacturer in the country to have more than 5 million facebook fans, and to celebrate this achievement, the carmaker will give its five lucky fans an opportunity to meet bollywood star Shah Rukh Khan, while the following few entries with most likes win SRK signed t-shirts. 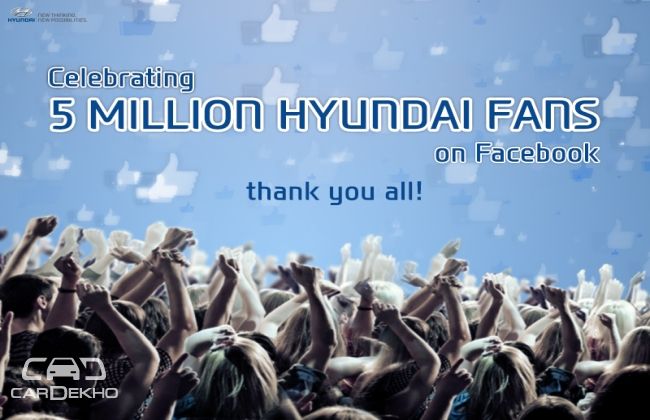 Speaking on the achievement, Mr. Rakesh Srivastava- Sr. VP- Sales & Marketing HMIL commented, “We at Hyundai take pride in being the fastest achievers of many milestones in the Indian car market. Hyundai is the fastest car manufacturer to roll out the 5 millionth car in the shortest timeframe. Hyundai in 2014 has also achieved the landmark of 5 million Facebook fans along with fastest domestic sales of over 4 lakh units while proudly servicing over 4.3 million Hyundai cars pan- India. Hyundai has consistently enhanced its product quality and processes to be titled amongst the Top 2 car brands on quality parameters Hyundai is also the only manufacturer to win 2 successive Indian Car of the Year (ICOTY) awards which symbolize Hyundai’s commitment to Indian customers by offering world class standards of quality products, technology and style. We affirm our commitment to the Indian market with the aim to be the most loved and caring brand in India.”

Also, Hyundai India is the only car manufacturer to win two successive ICOTY’s in 2014 and 2015 with its Grand i10 and Elite i20 respectively, as well as its been the fastest amongst all car manufacturers to achieve domestic sales of over 4,00,000 units and over 4.3 million cars serviced in India.