Hyundai Motor India will stage its newly launched compact sedan ‘Xcent’ at all the Fan Parks. The Xcent is a world-class product developed for the Indian market. Xcent symbolizes Hyundai’s commitment to Indian customers by offering high standards of quality, durability and reliability. 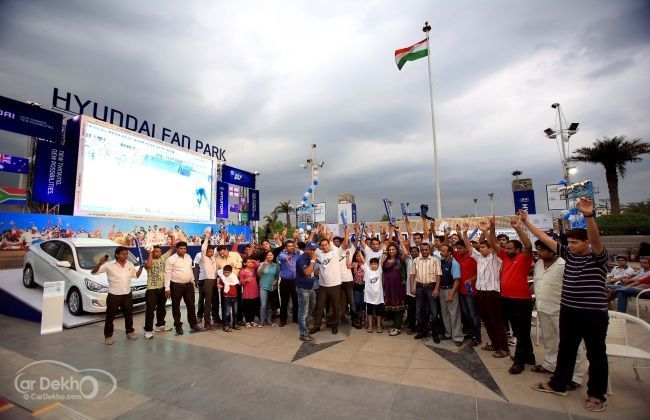 Announcing the Hyundai ICC Fan Park, Mr Rakesh Srivastava Sr. VP - Sales and Marketing, HMIL said, “We are very proud to be associated with ICC as the official partner. Hyundai Fan Park is a unique platform to  enrich and strengthen our relationship with cricket fans and take our brand association forward. It gives us immense pleasure to organize the ‘Fan Parks’ and we are positive that the cricket fans will surely enjoy the tournament in these Fan Parks.”

The Hyundai ICC Fan Park will be held in 09 cities–Delhi NCR :  Cyber Hub (Gurgaon) and Select City Walk (Saket), in Mumbai: Highstreet Phoenix (Lower Parel), in Chennai: Express Avenue, in Bengaluru: Forum Value, in Hyderabad: Prasad I Max, in Kolkata: South City, in Lucknow: Phoenix United, in Ahmedabad: Alpha One and in Jaipur: Pink Square where cricket fans will have the opportunity to watch the live screening of  the ICC World T20 2014 matches with a fun-filled environment.

In keeping with Hyundai’s passion for bringing innovation for the fans, Hyundai has created a Giant Cricket Bat of 48 feet in length at The Great India Place mall (Noida) which serves as a stage for showcasing our newly launched compact sedan ‘Xcent’ and also provides opportunity to the cricket fans to catch the live screening of the matches.

To further add to the excitement Hyundai has developed numerous engagements for the fans at the Fan Parks. Hyundai has created a unique 3D structure of recently launched model ‘Xcent’ to be enveloped by around 4,000 cricket balls on which the fans can pen best wishes for their favorite team. To celebrate the spirit of cricket this installation will be placed at the ICC Fan Park at Cyber Hub, Gurgaon.

With the philosophy of exploring innovative ways to connect with our customers & fans this cricket season Hyundai has developed interactive engagements on social platforms. The ‘Multiply The Blue In You’ is a new campaign on  www.bluebyheart.com where the customers can share  unique moments out of their life which personifies the Hyundai blue and their passion for Indian Cricket Team. The participants have to share cheers & good wishes for Indian Cricket Team  through video, text & image format along with a suitable caption by logging in through their Facebook /Twitter or Google+ .The lucky winners will stand a chance to win exciting prizes from Hyundai. The fans can play the gaming app - ‘Collect the Fuel’ by visiting the Hyundai India’s Facebook Page : https://www.facebook.com/HyundaiIndia

‘Blue by Heart’ campaign has been specially conceptualized to connect Cricket fans and Hyundai. The colour blue is a brand symbol of Hyundai and the passion of cricket. ‘Blue by heart’ campaign is a reflection of a true cricket enthusiast which represents Emotions, Oneness and Unity for the team as a fan and a follower. The campaign will be aired on TV, Print, and Digital media.