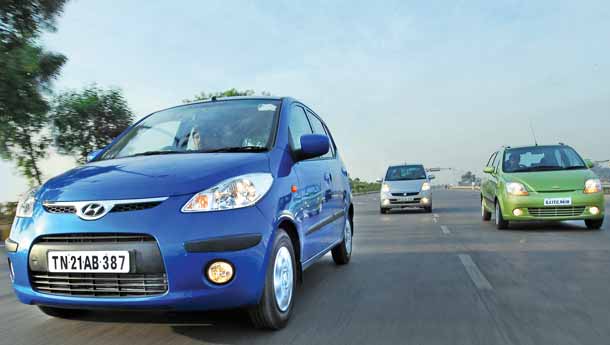 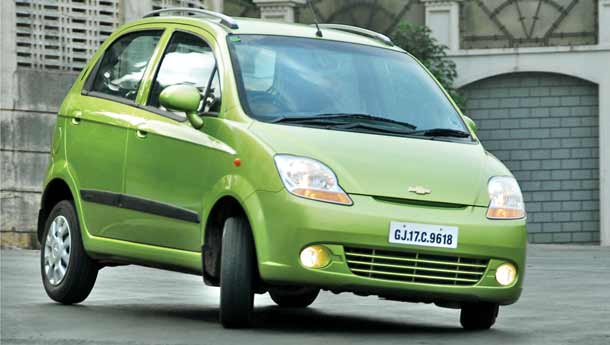 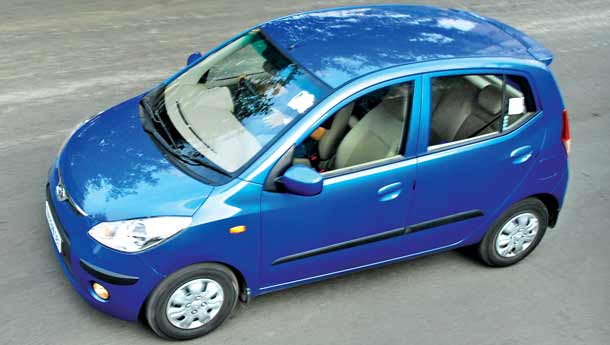 History has a tendency of repeating itself. Ten years ago, at the ‘98 Auto Expo, two new cars were previewed that dramatically changed the rules of the small car game. Hyundai, then an unknown name, brought in the Santro and Daewoo, known for the Cielo, gave us the Matiz. Even then, the Zen, India’s only premium small car, had gone through a round of updates to take on the Koreans. Ten years later, the scene is hardly any different.

What these cars did was make B-segment hatchbacks the staple diet of millions of Indians. What you see here today is the next generation, one that takes over from the Santro, Matiz and Zen. The i10 is Hyundai’s next gen Santro, if that’s what you want to call it. Sure, it co-exists with its predecessor, but it will replace the Santro in several world markets. The Spark might enjoy new parentage, but it retains a lot of the characteristics of the Matiz, all updated for the 21st century. The Zen, now the Zen Estilo, is Maruti’s ‘not-so-tall boy’ with the erstwhile low-slung car’s moniker used for brand recall. A lot is riding on the three, so much so that GM recently offered a massive discount on the Spark, bringing in customers by the hordes. Ditto Maruti, which is doing the same with the Estilo to revive the slow moving car’s fortunes. Can the new kid on the block, with its slightly inflated price tag, justify its presence? Let’s go find out.

Pretty, petite or presumptuous?
Hyundai have this habit of designing cars with attention value. Like the original Santro, the i10 looks like nothing else on the market. Its squint headlamps, with a tiny front grille and large air dam, are unlike Hyundai’s traditional designs that allow for a questionable large grille. The frontal package appears as a clean, uncluttered design unlike the Spark. In profile, it still retains some of the Santro’s lines, and it’s only once you get to the rear that you start to see images of primary school craft class. Somehow, the inverted C tail and the unexciting boot lid don’t make for the best aesthetic pairing.   For Hyundai, resemblance to the family might be crucial, but not for Chevrolet. The Spark doesn’t need to look like anything that GMDAT sells, and yet looks the part. You can still see traces of the Matiz in the oval headlamp design that has now been extended to get a thicker eye-lash like indicator. Even though lots of panels have changed, the doors remain more or less the same, proof that it’s not easy to change what is essentially a very good design.

Despite a clean design, the Estilo somehow fails to excite. You can’t fault it for lack of proportions, but it doesn’t attract eyeballs like the other two. Still, it’s not far off, and its clear mono-volume design has a sense of purpose. We wish Maruti had brought in their newer MR Wagon, though we hear that they are seriously considering repositioning the Estilo.

Power, more power, most power
The i10 makes the most power of the three. It comes via the same 1086cc mill from the Santro, retuned to produce a mite more torque and bhp. Hyundai calls its effort iRDe, but honestly, the difference isn’t enough to crown it the fastest car without a turbocharger. Yet, 65.7 bhp@5500 rpm and a torque rating of 10.1 kgm at a lowly 2800 rpm is within what one expects from a car in this segment. What it also has is a slick gearbox that makes it a breeze in town.

Chevrolet has opted for a 996cc four-potter, good for 62 bhp and torque that is a kgm lower than the i10. The engine is designed to be fairly peppy and has good bottom end grunt as well as mid-range power, linked to a gearbox that is one of the better offerings from GM, but not necessarily the best.This brings us to the Estilo. It has an ounce more torque than the Wagon-R,  power staying constant. The 1,061cc engine does still share some lineage from the M800 and is a buzzy mill, with good bottom end torque, but with a gearbox that refuses to play ball when you demand the best.

Fast, faster, fastest
It has to be said that the i10 is a fraction slower than the other two here. It boils down to all the weight additions that it’s been through, nearly 100 kg.Standing starts put the car 0.35 secs slower than the Estilo, and just 0.1 secs behind the Spark. In the 0-100 kph stakes too, it sticks very close to the Estilo, with the Spark making up lost ground, the only one of the three to score a sub 16-second time. Top speeds too vary by a touch, with the i10 recording 152 kph, the Estilo 153 kph and the Spark 156 kph.

It’s in driveability that the i10 claws back the remaining brownie points. The slick gearbox and the easy action of the clutch make it pure joy around town. Sure, the engine gets a tad noisy, but only at the higher end of the rev-range, though at no point does it feel crude.The Spark, like the i10, has a light action clutch, but the gearbox feels a bit notchy. Driveability too suffers a bit, and the position and action of the accelerator pedal makes it a bit tedious to put the power down cleanly.

On the Estilo, things aren’t upbeat. It’s strange how the rubbery gearbox manages to give the car credible performance. Our test car had logged considerable mileage, and we’d hoped its action would have gotten better as it had racked up several thousand kilometres. But it felt just as bad as it did when it was new. The engine scores where the gearbox fails, making for good low-speed driveability, but it tends to become very buzzy as it reaches top whack.   Sporty, sportier, sportiest
The i10 has a very sorted chassis. Despite using a wheelbase that’s exactly the same as the Santro, Hyundai have done a lot of work and the results are there to see. The underpinnings are sound and the car handles with aplomb. Small hints of body-roll are very much present, but nothing disconcerting. At high speeds, it feels well planted, making it a good highway cruiser, but a word of caution – it tends to pitch with four people on board, a very Hyundai trait. By using a separate motor for the steering, independent of engine power, it loads up well, and has some amount of feel, though not as much as one would like.

The same cannot be said of the Spark, where feel is close to non-existent. At times it feels like an EPS, but it is quite accurate nonetheless. The Spark rides well too, but through potholes it tends to thump and the dampers get overwhelmed. It’s quite a cheeky character around corners, a little too cheeky at times. It’s good fun, in the same vein as the Matiz and with the power overtaking the chassis, you can even have opposite lock moments.To get the Estilo to opposite lock is not so easy. There’s more grip here and even more body roll for company. It rides better than the Spark, but still isn’t as well damped as the i10. The steering feels dead and feedback is as bland as alphabet soup.  The chassis also doesn’t like to be thrown into a corner – the front wheels start to load up and lose track, with the body tending to pitch to one side.

Gucci, Tommy Hilfiger or Gap?
Let’s admit it, the interiors of these cars won’t please the prêt conscious Parisians. But in India, it’s a different story. If the Estilo looks like a marriage of silver and beige, with lots of space to store knick-knacks, you will find the centre-console mounted dials of the Spark uber-cool and the receptacle for the i10’s gearlever space age.The i10 is a beige party, but it’s all very well put together. The space is good, the driving position is spot on and everything feels nice to hold. It also has by far one of the best integrated music systems available on any car today. At the front, the lack of an adjustable headrest is an issue, raising some questions about matters of safety. Our test car had optional airbags and ABS. Back benchers found the seats a bit hard, especially on short stints, but on longer ones they were comfortable.

Take to the wheel of the Spark, and the slightly poor finish is evident. The silver garnished door handles seemed scruffy and were looking off-colour.  The front seats lack thigh support, making journeys above half an hour painful. The car does come with optional ABS and airbags, though the overall kit is quite good for the price. Passengers in the rear complained of a lack of good shoulder support, which begs me to ask GM, why not opt for the same seats from the Matiz? They had so much more support.

On the Estilo, one tends to instantly notice the well finished dashboard, which gives it a more premium feel than it actually is. Space is more or less the same as the Spark, but the seats are better. Safety kit includes ABS and a driver’s side airbag as options, though the missing passenger airbag should have been offered as well. Space at the rear is average, with the seats lacking some shoulder support, but making up well in other areas.

Third, second, first
We have to admit that the Estilo has not managed to live up to the ideals of the Zen. Unlike the Zen, it isn’t sporty to drive, tends to be quite nervous around corners and has a gearbox with a forgettable action and a buzzy engine. It makes up with well appointed interiors and space, a lower price tag and that Maruti badge. We wish it was as exciting to drive as the Swift, but we need to wait and watch what Maruti has in store for it.

Had it not been for the poor driving position, iffy power delivery and gearbox, the Spark would have made it a much closer fight to the top. It’s very peppy and can be a lot of fun around twisty circuits, but that alone doesn’t make it a winner. We wish the steering had a bit more feedback and that it gripped better, because as a platform, the Matiz never disappointed. The price tag seems alright and GM is getting their service quality standards up. If you can’t afford the i10’s asking price, the Spark has everything to be a good buy, but not the best.

This is why the i10 takes the pudding. It’s ours and everyone’s Car Of The Year. It’s hard to fault (maybe the lack of adjustable front head rests) but that apart, it’s very well engineered and put together. It’s good to drive and ride, heck, it’s even quite a bit of fun. Maybe Hyundai have over-engineered it for export, but then the ultimate winner is you, the customer. It’s the most expensive here, but feels completely worth it.

The i10 has won it yet again, just like the Santro ten years ago. You know what they say about history…