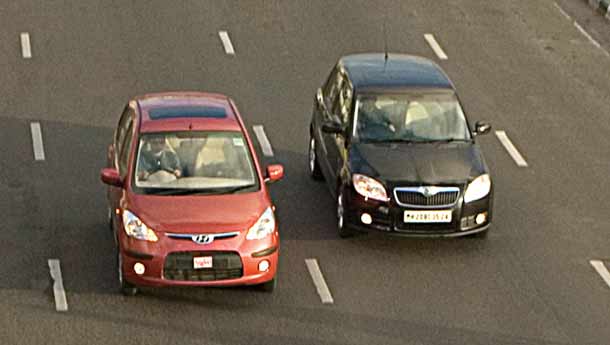 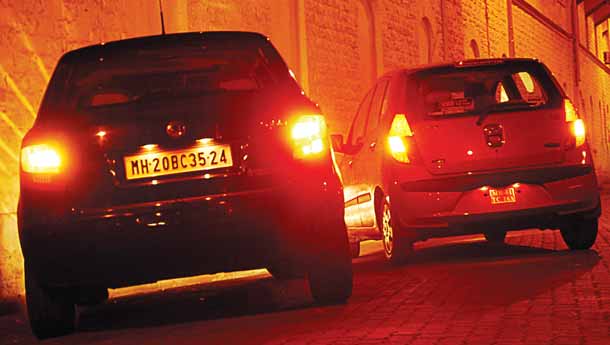 Yes, yes, I know – compare apples with apples, not oranges. Pick on someone your own size. Punch within your weight. Don’t bite off more than you can chew. Play fair – and all that sort of thing. On the face of it, I’ll admit that pitching Hyundai’s i10 Kappa against the relative might of the Skoda Fabia 1.4 MPi is like asking a politician to actually serve the electorate – in other words, fairly pointless. There’s a near-two lakh rupee price difference between the two cars, to start with. One has a 1.4 litre engine; the other makes do with a 1.2 litre unit. One’s an auto; the other has a manual tranny. One is significantly larger than the other. One’s oriental, the other’s occidental. One’s… well, never mind; you get the idea – it’s a chalk-and-cheese deal here. Ah, but perhaps that’s where the point lies.

The i10, Hyundai’s multi-award winning, big-selling small car, has become the first car of choice for many thousands of buyers. This isn’t surprising, since it’s in a class by itself in the small car game; indeed, it wouldn’t be out of place to say that it’s one of the best small cars in the world. Character, fuel economy, and ease-of-use – it’s got them all in large measures. About the only things missing in its armoury were a slightly peppier engine and an automatic gearbox option and, as you know, Hyundai took care of both those deficiencies in one fell swoop. The i10 Kappa Automatic should be the answer to one of the most common Which Car? questions we receive: ‘Is there a small car with an automatic gearbox that’s worth buying?’

The Fabia, on the other hand, is being seen by many as a good way to buy into the premium feel that the Skoda brand name commands in India. ‘A Skoda for Rs 8 lakh? Sounds good to me!’ is what a lot of people appear to be thinking. It’s also a car that a fair amount of people are buying as a second vehicle, in both senses of the word – as an upgrade from a Santro or Swift, as well as a second car to go with an existing, larger sedan. With the auto option now available, the i10 Kappa can now slot itself into the latter category too, as a second car for the wife or daughter (no sexism intended here, folks; we get a huge number of car-buying suggestions in this regard). So, with that bit of back-story out of the way, let’s go find out what these cars are like to live with in a typical city day; that’s where they’ll be used most, after all.   LOOK HERE
The competitors here have widely differing characters. The Europeans know how to work sheet metal, so the Fabia’s got a certain presence to it that the Hyundai can’t match. I wouldn’t go so far as to call it beautiful, mind you – the headlights make it look slightly cross-eyed, and there’s a bit of a resemblance to the Roomster concept, which wasn’t the most sophisticated piece of design on earth. Nevertheless, it manages to be curvy and butch at the same time; it’s ‘handsome’ rather than beautiful. The creases on the bonnet help break the monotony, and the chrome-lined grille is a nice touch, although it might be a bit bling for some. The wheel arches are nicely filled out with those 14-inch, 5-spoke alloys, the tail lamps complement the rear and, altogether, the Fabia’s a car that’s going to get you a few looks on the road.

Not so the i10. People may have rubbernecked when the car was first launched, but now it’s so common that it won’t draw a second glance. This speaks volumes about how well Hyundai have managed to sell the car to the public, of course, but as an attention getter, it’s not top-of-mind – unless you paint yours pink and green and put Dagmars on it or something. This is not to say it’s ugly, by any means. This is a nice, cheerful little car, with a perky personality that’s let down only by the disappointing rear end design; it’s too slab-like and looks like an afterthought. It’s almost perfect as a city car, though, because of its compact dimensions. It’s all even in this round; the Skoda is more exclusive and therefore not as common, whereas the Hyundai’s character stands it in good stead.
FABIA:***
i10: ***

GET INSIDE
It’s a bit of a mild shock when you slip into the Fabia’s cabin, to be honest; its relative simplicity, compared to its exterior design, is a rather sharp contrast. I’m not implying that there’s anything wrong with it, however. It’s all very European, in keeping with the general theme, and it’s a very tasteful place to be in. The muted beige colour scheme is rather soothing, and gives the cabin an enhanced sense of space. It’s fully loaded too; the sun-roof, rear parking sensor and dual-airbag boxes are all ticked. Frankly, I think sun-roofs are rather pointless in our conditions, except perhaps at night, when it’s nice to let in some nocturnal light. The music system and air-conditioning controls are switched around i.e. the AC is on top of the stereo, so ergonomically it takes a little getting used to. The plastics and fabric are of a uniformly high quality and look like they’ll last a very long time, the instruments are large and easy to read (and there’s a useful distance-to-zero fuel indicator) and the seats are great, with lots of support in all the right places; there’s plenty of rear-seat legroom too. You won’t find luggage too much of a problem either, because there’s generous room in the hatch.

The i10’s cabin is a little quirkier than the Skoda’s – it has mainly rounded edges to the Fabia’s straight lines. Consequently it’s more cheerful as well, and everything feels nice to the touch. Like the Skoda, the quality of materials is excellent, and the only downside is that horrible, dark brown dashboard insert – what were they thinking? The Hyundai’s no slouch in the features game, either – there’s a sun-roof and dual airbags in here too. No parking sensor, admittedly, but isn’t that a bit of an overkill anyway? The i10 trumps the Fabia in two important areas as well; its AC cools faster and better, while the music system is on another level altogether – it’s among the best standard-fitment systems of any car in India. The driving position is great, with a nice, tall bias and a good view out onto the road, while the seats do a good job of keeping your back and thighs free of strain. Predictably there’s a little less overall room (for luggage as well) than in the Fabia, but the i10’s still a fairly spacious vehicle. All things considered, it’s still neck and neck. The Fabia has a premium, if somewhat austere, feel to it and is the roomier car, whereas the i10 carries its cheerful character into its interior.
FABIA: ****
i10: ****

FLOOR IT
Here’s where the apples and oranges start to really stand out – or do they? You would think that the Fabia, with its 1390cc, 84 bhp, 13.4 kgm engine would beat the i10 with a bully stick, but the fact is that in Mumbai city (that great equaliser of internal combustion), the i10’s 1190cc, 78 bhp, 11.3 kgm powerplant acquits itself almost as well as the Fabia’s unit. The Skoda has a refined, unstressed engine, but the gearing isn’t ideal for stop-start city use; there’s not much get-up-and-go low down in the rev range, and it only really starts to build up a head of steam northwards of 4000 rpm. Unless you’re given to driving around at the crack of dawn and in the dead of night, this is unlikely to happen too frequently. On the plus side, the gearbox is an absolute delight, with positive shifts and a short-throw gear lever, and the unstressed nature I mentioned earlier makes for easy, relaxed driving.   The Hyundai, by virtue of its 4-speed auto ‘box, is the easier car to handle in the city. Try driving in Mumbai during the Ganesh immersion processions, when it can take two hours to travel 10 km, and you'll be glad you don't have to keep changing gears. The new Kappa engine is no slouch, getting from 0-60 kph in 6.96 seconds, and it sounds feistier than the Fabia's powerplant too. The gearbox exhibits a certain amount of lag, typical of small automatics, but with an energetic kick-down, it winds itself up and shoots the little Hyundai forward. It's clear that out on the highway, overtaking would require advance planning with this gearbox, but for a quicker response, you can always slot it into the three-speed 'manual' shifting mode. Thus, by virtue of its greater suitability to city driving, the i10 takes this round, but not by much.
FABIA: ***
i10: ****

RIDE ON
The Fabia comes roaring back in this round, with its supreme ride quality. It's safe to declare that it's the best-riding hatchback in the country; indeed, its ride quality would put a lot of sedans to shame. The McPherson strut suspension up front, with a multi-link setup at the back, simply dismisses undulations in the road, transmitting almost nothing but a faint rumble to the occupants. It's also the better handler by far, although this factor gets nullified to a large extent in city conditions. When was the last time you drifted around your local traffic roundabout, anyway? Actually, don’t answer that. There's a decent amount of steering feedback, the wheel itself is nice to grip and the brakes inspire confidence without being outstanding. The i10 battles gamely, but doesn't have the ammunition to best the Skoda in this category. The ride isn't thrashy by any means, but traverse a broken stretch of road at a decent clip and you're going to be feeling every bit of it; the car's going to skip around too. Still, the suspension setup performs well enough on good roads, offering a pretty decent level of comfort. In terms of handling, the i10's tall stance means that it isn't as confident around corners as the Skoda, but the traffic roundabout theme applies here too; for city usage, it's perfectly acceptable. The brakes are very good too, with a fair amount of feedback and quite a sharp bite.
FABIA: ****
i10: ***

AND FINALLY...
Here comes the tough part. How does one pass judgment on two cars of such differing character? By passing two judgements, that's how. The Fabia's  a very, very good all-round automobile and an excellent city car – until the sales person reads out the price tag. However, for someone who already owns, say, an Accord and who wants a second car, a fully-loaded Fabia 1.4 is a great option. The i10 is a consummate city car; just the thing to have as a runabout. At about Rs 1.5 lakh less than the Fabia, and with virtually the same spec list, it's an absolute steal – you simply can't go wrong with it. What would I buy, you ask, clicking off the safety catch? Er, the Fabia...