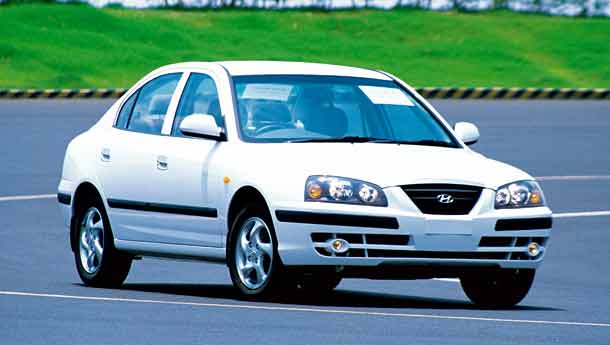 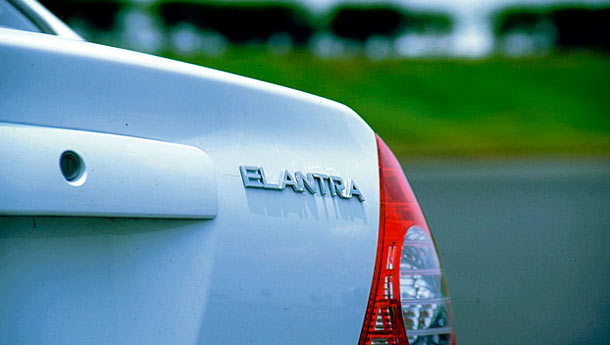 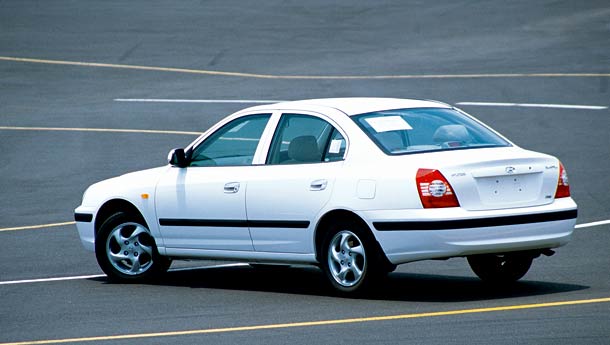 Even in April, Chennai can be pretty hot. And at the tree-less test track at the Hyundai plant on the outskirts of the city, it’s positively baking. It’s 38ºC, according to the digital display on the dash of the new Elantra, and now that I know precisely what the temperature is, the heat seems even more fierce. All the more reason to check out the efficiency of this sedan’s airconditioning – and keep driving around, rather than get out of it.

Which is actually not a bad thing, considering the Elantra is fairly well-upholstered and is a nice place to be in. It has shut off that oppressive heat and to an extent, the drone of the common rail direct injection diesel engine. Did I say CRDi? Yup, after the three-cylinder 1500cc unit of the Accent and the massive, turbocharged 2900cc power-plant of the Terracan, comes another CRDi engine in the Elantra. This time, it’s a four-cylinder 1991cc unit developing 110 bhp at 4000 revs and a neat 25 kgm of torque from just 1800 rpm onwards. Sounds good, right? Wait, that’s not all. Hyundai has also brought in a petrol version, a 1795cc inline four that produces 125 bhp at 6000 rpm and 16.6 kgm of turning force at 4500 clicks. Which puts the Elantra firmly in competition with the Skoda Octavia on one hand and the Toyota Corolla on the other. Besides this, with an inviting price-tag on the entry level GT version, the Elantra lands firmly in the Chevrolet Optra 1.8’s ballpark as well. Yes, there’s a great comparison test just waiting to happen! We’re preparing ourselves for the onslaught of Which Car? questions already.

If one of those Which Car? queries is about looks, then the Elantra might be difficult to recommend. Though this car received a facelift internationally, it retains that pinched, old, Hyundai corporate face, something which is already being cleaned up in their new and forthcoming line-up of cars. That curiously shaped grille and those headlamps buried in black plastic went out of style along with VHS tapes and VCRs. The taillamp treatment however is not that bad, it looks contemporary enough, but the rest of the architecture is conventional. That does not mean the Elantra does not have presence. Wearing a fluorescent white cloak and gleaming in the Chennai sun, the Elantra looked rather substantial. Something that’s necessary in this category of automobiles.   Inside, the overall layout may also be conventional, dare I say dated, but all the controls are ergonomically placed, and the quality of the plastics seems to be of a higher order. There are quite a few notches and cubbyholes to keep stuff – I couldn’t think of many things that would fit inside these, but I am sure once you start living with it, you’ll find them useful. The speedometer and the tachometer gauges get a unique, border-less treatment, which make them look different from anything you would have seen before. But it gets better when you switch on the headlamps in the night and watch the effect of those blue digits and the red needles. And the steering wheel is quite neat too.

I am inside the diesel Elantra, which made me hopeful with its engine specifications. And the way I see it, it’s this version that’s critical for Hyundai, to bring in the volumes – other than the Octavia 1.9TDi, it does not have much competition, even all the way up to the D-segment. Crank it up, and there is that distinctive diesel clatter, till things get warmed up. The 2000cc motor is mated to a five-speed manual gearbox, which feels a little notchy. And the steering wheel is quite tight – rather unusual for a Hyundai, irrespective of the front-heavy diesel engine placed on the nose. But you know what, it’s this quality that adds involvement to the drive.

The common rail unit doesn’t disappoint. With gobs of torque arriving quite early in the rpm range, it makes for brilliant driveability. Keep it in the powerband and the Elantra’s performance never flags. Frequent gearshifts are eliminated and you can cruise or overtake without having to move your left hand.

Preliminary testing reveals that it attains the 60 kph mark in 6.41 seconds, and the 0 to 100 kph timing is 13.81 seconds. It may not be quick off the block, but once it attains sufficient speed, there’s no stopping the Elantra CRDi. The diesel Elantra is fantastic on the highways – it chomps distances with great ease. Cruising steadily at 100 kph, with the needle hovering at the 2500 rpm mark, you too are at ease.   But when you take the petrol version out for a drive, the difference between the two is pronounced. As much as the diesel Elantra is involving, the petrol is more middle-of-the-road. The 1800cc four-cylinder unit is refined all right, but unlike the Corolla, it’s  more relaxed and does not exhibit any manic performance tendencies. According to my back-of-the-envelope performance timings, it’s not so quick off the block initially, touching 60 kph at just a little over 6 seconds, but 100 kph is dismissed off in 12 seconds. Which is not bad at all. The gear ratios are evenly spaced, matching the nature of the engine, with the third gear offering decent tractability – going all the way up to 142 kph before redlining at 6000 revs. Though the petrol Elantra is not as involving as the diesel version, it’s nevertheless a gentle performer and does its job without drama.

The ride quality is what you’d expect in a car of this class. The suspension, which comprises McPherson struts at front and a dual-link setup at the rear, is tuned well for a balanced, comfortable ride. For India, the ride height has been increased by about 25 mm, so hopefully those ugly grinding noises when you ride over speedbreakers should be absent. These test cars rode on Korean 195/60 15” tubeless radials that were quite grippy. This tubeless rubber works well for the Elantra’s handling prowess, making it feel surefooted and confident. The other good news is that the Elantra gets ABS with EBD as standard, with disc brakes all around. Even on hard braking, it never loses its poise and comes to a halt in a straight line.

Going by this initial drive, Hyundai seems to have got its act together well on the Elantra. They have what seems to be two good powerplant choices and the car comes loaded with stuff. The build quality is exemplary, the cabin cossets passengers and drivers alike and there’s adequate legroom too. And like the Santro, I think the looks will grow on people eventually. Hyundai actually were planning to introduce the five-door (notchback, a la the Octavia) version of the Elantra as well, but that could enter the market later like what they did with the Accent and Viva.

For the moment, it looks as if the Elantra has the potential to affect Optra and Octavia sales. The action in the executive segment is just beginning and the heat, as the song goes, is on.