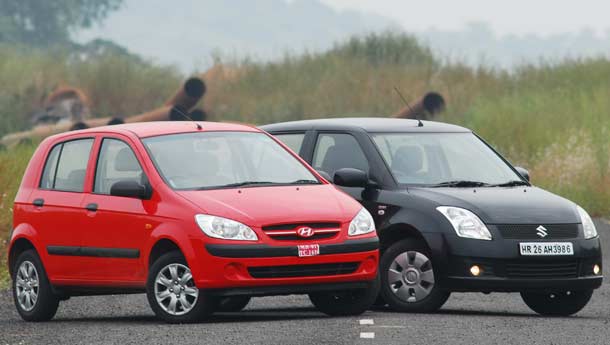 Technically, this should be a no-brainer. The Getz diesel has more power, more torque, can out-accelerate the Swift diesel on all counts and is nearly as fuel efficient, if not more. It’s also more spacious, better built and rides better – the latter by a mite. It would be easy to conclude at this point that the Getz is the better buy, head to the Hyundai showroom, and end the case here. But then the Swift diesel is some 50 grand cheaper in Mumbai, has a powertrain that is refined and is sold by a company that has as many service outlets as paan-shops in this country (nearly hyperbole but nearly true). Add the fact that the motoring journalist fraternity has been raving about it all year, and the Getz can’t simply walk away with the top prize. Or can it now?

It’s the moment Hyundai have been waiting for, the right engine to take on the Swift. So has every enthusiast. Finally, a hatch with more than 100 bhp! It felt like the world had stopped since 2001 and the Fiat Palio 1.6 GTX, holding on to the ‘hot hatch’ tag for all this while. It has company now though. This Getz borrows the entire block from the Verna, lock, stock and tyre smoking barrels. This includes the numbers that one associates with power and torque. The rest is the same old Getz Prime, so you get the curvy headlamps, the smiling nose and the marginally restyled bumpers and tail lamps. The underpinnings too are the same, with slightly reworked dampers, brakes and gear ratios as one would expect.

The Swift, on the other hand, went through more serious changes to damping and brakes to accommodate the ‘foreign’ engine. These changed the driving character, with a bit more understeer than the petrol, but infinitely better ride quality. It doesn’t have the Getz’s 108.5 bhp of power or 24.4 kgm of torque, but at 75 bhp, 19 kgm and a kerb weight that is 72 kg less than the Getz, it does manage some respectability. Both four-cylinder engines are refined units, with the Swift just a tad better at it. What the Swift has is slightly shorter ratios, that makes it more driveable around town and less susceptible to judders from the transmission.   Give the cars to those who are new to road testing like Shreenand and myself and we will drag it on an open, safe stretch of road. And no matter what he would do to get the Swift up to steam, the Getz would just open up a four-car length gap to 100 kph. We didn’t try to go any faster, but words like ‘distant speck in the horizon’ might just be apt closer to top whack. Standalone figures reveal a full 3.2 seconds faster to 100 kph, the 80-120 figures widening the gap to 6.5 seconds. Top speeds show a 12.1 kph difference in favour of the Getz. Gear tooth for gear tooth, the Getz has creamed the Swift diesel. What the numbers don’t reveal are the slightly rubbery gearshift on the Getz. They also don’t reveal that despite the five gears and the tall gearing, I felt that an additional cog would have helped. Clocking the 80-120 kph run meant shifting from third to fourth and losing more time in over-revs. Also, the longer throws and a fair bit of torque steer on start meant some loss in time and had all these factors been dealt with, the Getz diesel could have even knocked at the BMW 320d’s doors!

The Swift diesel just has no answer to the Getz’s onslaught in a straight line. But around corners it can keep up with the Getz. Despite all that prodigious power, the Getz can’t make the lithe Swift disappear from its rear-view mirrors. Unlike the Swift, the Getz’s mechanical assisted steering takes longer to respond to inputs, with the initial response being ‘nil’ before loading up rather uncharacteristically. It also lacks ABS, so you plan your entry into corners with caution. Unlike the lighter front-end of the Swift, the Getz is a bit more reluctant to play ball. Overdo it on the Swift and it’ll start to lose its tail and the Getz will disappear into the distance once again. Despite a bit more understeer, there is also more grip on the Getz. The 165/80 tyres aren’t up to the job to take anything beyond a point on the Swift, while the Getz’s 175/65 tyres stick better. The Getz also has a wider front track that makes it more planted around corners, but despite this, the Swift is more up to the task of planting a smile on your face.

Around a track, the Getz might be more capable of keeping a cleaner line, but the Swift will just leave so many tyre marks around that and, the handbrake will be more or less redundant. The Swift might be more adept at stepping out, but it’s also more fun around corners than the Getz. The flexible chassis, lighter front-end and the better-loading steering makes you grin from ear-to-ear. What is not funny, though, on the Swift is the ride quality. Maruti has worked very hard to get the damper settings right on the diesel and it is quite good in isolation. The McPherson struts with coil springs, coupled with the higher 80 profile tyres make it a soft-rider, but the Getz’s combination of 65 profile tyres and McPherson struts with a torsion bar are better damped. It’s a bit hard at first, but get past the teens and into the twenties and it travels on bad roads with a degree of authority.   With that same degree it even gets the Swift to think hard about the interiors. You don’t fault the Swift’s interiors for lack of spunk, but the way it is put together makes you feel a bit shortchanged. You feel it even more as you spend time in the Getz. I don’t particularly like the fake wood on the centre console and the door switch covers, but other than that the use of materials on the Getz is much better. The soft-touch surfaces feel nice, the louvers a mite more ready for rough use and even the switches and dials. Our long term Swift diesel has started to show traces of fading, but Srini has yet to complain about it on his three-year old Getz. Of course, the big debate about whether the Getz or the Swift make you weak in the knees continues, but yes, until you don’t have that Lambo Reventon parked in your shed, these are both chunky, well designed cars.

So where does all of this place the Getz? Has it finally outscored the Swift? Between the two, there is close to no difference on the fuel efficiency count. As for the extra half a lakh of rupees you will have to shell out for the Getz, it racks up to only an additional Rs 1,500 a month over a typical five-year period. Of course, this does not include the other variable costs like insurance, service costs, etc. Even then, the difference is not substantial. So,as I mentioned at the beginning, it is indeed a no-brainer. It has to be the Getz.