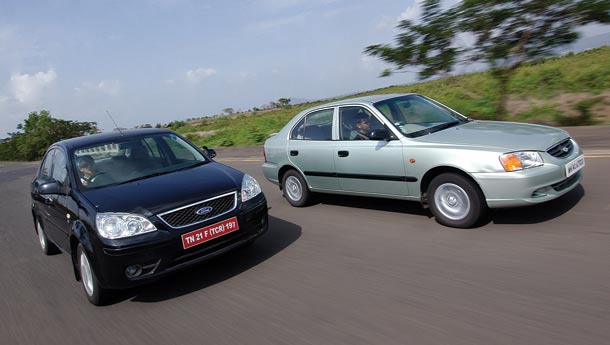 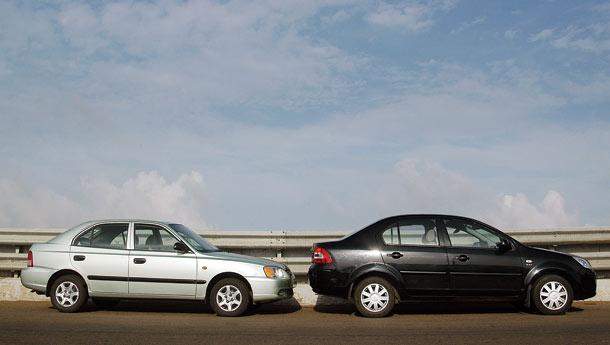 Someone once said ‘Numbers are like bikinis. What they reveal is interesting but what they hide is more vital.’ Not the most ideal way to start a diesel comparo, but take a look at the 0 to 60 kph times of both these cars and you will know that’s true. Where the Viva completes the run in just 5.14 secs, the Fiesta is lagging a car length behind and takes 6.56 secs. In the dash to 100 kph, the Fiesta claws back the lead but only just, with the Viva still being half a second quicker. The Korean might be a generation old, but generation gap be damned. Stopwatches measure time, not age.

The manner in which these cars rack up numbers is completely contradictory and is exactly why we are here. While the Fiesta is the quiet type, the sort who hangs around in the kitchen at parties, the Viva likes to boogie on the dance floor. The Viva is fun in a straight-line and acceleration, though not neck-snapping, is lively. Or least much livelier than the Fiesta.

And it would be. The Viva comes with a motor that liberalised common rail injection in India. It was a scorcher then, and even after being exposed to a lot of new-generation diesels, it’s a scorcher even now. But the razor’s edge has been softened a bit, or at least it feels so. Detroit Diesel developed the motor for Hyundai, and if you leave alone the fact that it’s a three-pot, the rest of the nomenclature makes for some good reading. The 1493cc motor breathes from 12 valves, makes 84.6 bhp@4000 rpm and an astounding 19.1 kgm@2000 rpm, thanks mostly to the holy common grail er... rail. And if you think I am out of line to use the word ‘astounding’, let me tell you that a Honda Accord makes as much.

The Fiesta gets a 1399cc, 68 bhp motor from the Duratorq family. It has common rail, but loses out to the Viva in power and torque stakes since it’s an 8-valver. The Fiesta’s motor however warms up rather quickly and is the quieter of the two, principally because its common rail unit is a generation better than the Viva’s. Of course, being a proper four-cylinder unit, it is inherently better balanced than Hyundai’s lump, making it the more pleasing to drive of the two.

Firstly, refinement levels are a couple of notches above the Hyundai. Also, the Viva’s powerband is really narrow and rapid progress is always accompanied by a fistful of gearshifts – not a very enjoyable thing to do since the shift quality isn’t the greatest. So while you’re struggling to keep the Accent between 1800 and 3000 rpm, the Fiesta’s power comes in a steady stream from idle right up to the red line. The overall feel in terms of gearshifts and engine noise is better in the Ford, and unless your commute to work involves a drag strip, you would be better off facing the blue badge.   And if it involves a lap of Silverstone or something that even remotely resembles it, no need to switch cars either. Ford knows how to make cars handle and the Fiesta corners admirably well. Also, the amount of power that the engine makes isn’t overpowering by any means and so there isn’t even a hint of torque steer. Steering too is very chatty and everything about the car acts cohesively in a corner.

The Viva, on the other hand, is the Ford’s complete antithesis. Because there is so much torque, the front wheels end up being louder than the stereo. Then there is the steering. Sailors have reported higher levels of feedback on their ship’s rudders. In terms of ride quality, it’s status quo as well. As I said before, Ford knows how to build a chassis and they also know how to suspend it. If you are used to Japanese cars, the Fiesta’s ride quality will teach you a lesson on how a car should go over bumps. In fact it’s so good, it is quite easily the best in it’s class. The Korean isn’t too bad if you look at it as an individual entity, but let me put it this way. If you are at the point in your life where you wake up to a new body part making it’s presence felt, you will be better off in the Ford.

Neither of the cars here tickle the visual taste buds, which is quite all right really. I mean, when was the last time you saw a sedan that made you go week in the knees? Besides, only Italians can ever commit the glorious sin of building cheap, beautiful cars. So even though the Fiesta is the better looking car here for most eyes, it’s amazing how featureless it is. I mean, here’s a car that would have first appeared on drawing boards nearly a decade after the Viva and yet it looks ordinary. If God is in the details, the Fiesta is an atheist. The Viva on the other hand has been around for some time. At least long enough for people not to notice it any more. Bear in mind though that the Viva is a hatch, and big hatchbacks do have their own charm. It’s no Pininfarina but hey, it’s better than a humdrum sedan.

In terms of equipment, both cars are evenly matched but the Fiesta’s interiors are much nicer and comfort levels are better. And even though the Viva might be cheaper, the difference isn’t enough to stop us from crowning the Fiesta the new diesel mid-size king.

Actually, when we planned this comparo, we had our doubts on whether the Viva would match up to the Ford. Given that it’s a generation old, it did start this test on the back foot, but fond memories of second gear wheelspins made us believe that the Korean might just pull out something special. However, that wasn’t to be. In fact if there is one thing that this test did prove, it’s that Hyundai really does need to reposition this car, if not replace it. Till then it’s game, set and match Fiesta.