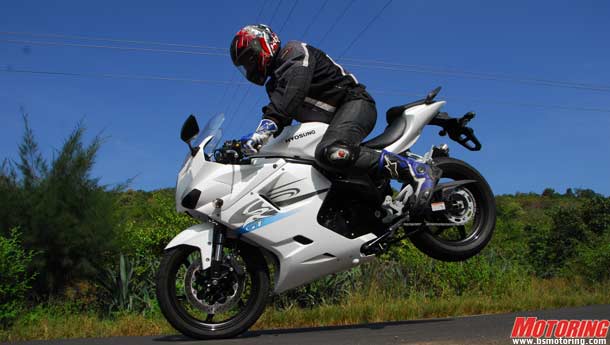 Korean bike brand Hyosung will launch 250cc performance and cruiser bikes next year for under Rs 200,000 each, to compete directly against the best seller in that segment, the Honda CBR 250.

Hyosung, which sells cruisers and sports bikes, is presently setting up a completely-knocked down (CKD) assembly facility in India for two models, the ST7 and GT 650R, along with partners Garware Motors of Pune. The Honda CBR 250, priced at Rs 151,000 (ex-showroom, Mumbai) has garnered total bookings of around 3,000 units since January from across the country.


Like Honda, more companies are keen at starting local production of such high-performance bikes in India after gauging the demand generated by the Kawasaki Ninja 250 launched by Bajaj Auto and priced at Rs 269,000.

Diya Garware Ibanez, managing director, Garware Motors, said: “We are discussing with SNT Motors (owners of the Hyosung) to see how the volumes work out for our two models. We will follow the launch with the naked version of the GT 650R later in the year, followed by the 250cc models next year.”

Adding:”With regard to pricing of the 250cc, we have to be right up there with the best selling models like the (Honda) CBR 250. Other models of Hyosung could also follow, as there is a big portfolio of models to choose from.”

Garware will open bookings for the ST7, priced at Rs 600,000, and the GT 650R, priced at Rs 550,000, on April 21, with deliveries to start by May end. The company will accept bookings at 10 dealerships which will be opened shortly, followed by an additional 10 outlets to be opened later in the year.

Although engines, transmissions and gearboxes for the Hyonsung bikes will initially be imported into the country from Korea due to the low volumes projected during the first year, they may get locally made in due course if demand improves substantially.

Garware is expecting sales of around 2,000 units of the two models in the first year.”We may have to go in for local production of engines to benefit from the lower tax duty if there are enough volumes supporting it,” stated Ibanez.

By the revised rules of the finance ministry, all imports of pre-assembled engines, transmissions and gearboxes will have to pay a customs duty of 30 per cent as against 10 per cent levied last year.

The company is in talks with distributors of neighbouring countries like Nepal, Sri Lanka and Bangladesh for sales of Hyosung bikes. Hyosung had recently appointed a distributor in Nepal, which is keen on procuring the bikes from Garware due to lower duties.

The company is spending Rs 20 crore towards the CKD facility being built at Wai in Maharashtra. It has acquired 25 acres, which can be used for expansion, said executives.