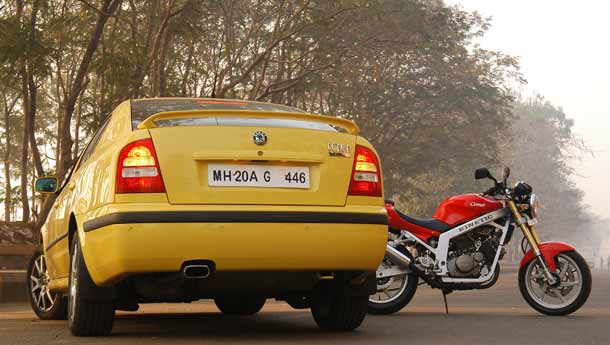 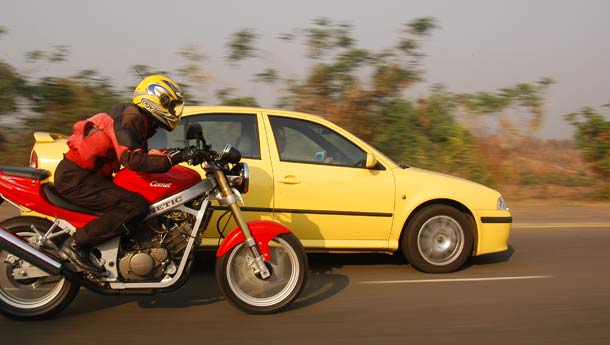 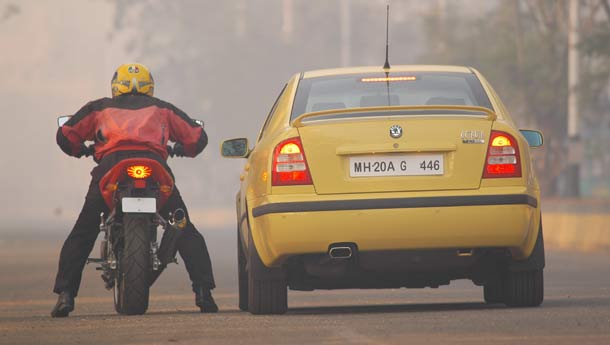 It was a cold January morning but I felt warm. I was going to win today. Of course, I was driving the Skoda Octavia RS and the needle was planted at 150 kph – way beyond what the Kinetic Hyosung Comet GT250 would ever manage. But then the story wasn’t about sheer speed, it was about the two most involving machines in the Indian market today. Both had won an award at our 2005 evaluations – the RS won the Jury Award for being the most involving automobile to drive and the Comet walked }away with the Import Bike Of The Year title.

And while I’m on the subject, here’s a message to those who have been spilling spleen on my inbox for not awarding the Comet the Bike Of The Year award (seriously nasty language was employed for Honda, how dare they launch the Unicorn, and you, you gave it the BOTY). Guys, we like the Comet too. Do you think we’d yawn at a multi-cylinder firecracker with wheels? We love it, and we summoned the Comet for the evaluation, so we could ride the wheels off it again. And again. But then, you can’t compare oranges to lemons and I’m sure the Import Bike Of The Year category will witness some serious action in the coming months.

But we did get the message. There are Comet mongers out there who have placed it at the holy throne which belonged to the venerable RD350 and who are we to disappoint them? I am sure you lot are not going to be satisfied with all the reading material you can get on the Comet, right? Here we go, feast yourself on even more Comet stuff.

Can the Hyosung Kinetic Comet take on the Octavia RS?  We knew the monster turbo automobile would take the pants off the Comet in the top speed stakes but  thought the Korean missile would have enough punch to beat the car on a 0-100 kph drag. Let us see.   First things first - both machines are enormous fun to drive/ride. The RS has redefined the term ‘variant’ in India. Its heart is its strength. The Octavia in the page, you see, has a 1781cc 20-valve turbocharged in-line four that churns out 147 bhp – the real thing that you can buy in Europe pounds the front wheels with 180 horses. It has got stiff spring ratings, beautiful 16-inch alloy wheels and low profile rubber with the bite of a ravenous shark. Garnish that concoction with a spoiler, racing pedals, VRS badging and some very bright colours and you get the perfect meal for the Indian enthusiast who has Rs 13-odd lakh to spare.

The Comet, on the other hand, costs just Rs 1.8 lakh on road and is worth every penny since there is no choice whatsoever in its segment – Kinetic could have priced it at Rs 2.5 lakh and still gotten away with it. But they haven’t and it is the perfect machine that you need to own and ride to get your sport bike basics right before the 400s and 600s are rolled out. It looks a billion dollars despite its Korean origins and we are in love with the inverted forks finished in gold. It has other ingredients too, like a full perimeter frame to mount the V-twin motor into, up-swept silencers, a rear cowl that is straight out of 250cc GP machines of yore and a stance that even Ducatisti would approve of. Carved out six-spoke alloys, a smaller front wheel, 300 mm discs upfront, a neatly retro round head lamp and a very likable riding position continue the theme.
Back home in South Korea,  the Comet has a bigger sister that displaces 650cc, which, if Kinetic decides to import it, would become the performance king – amongst cars and bikes. For the time being, we have to make do with a 75 degree, oil-cooled V-twin that displaces 249cc to develop 30 bhp at 10500 rpm (RD addicts must be smiling at that figure!). This motorcycle comes into its element above the 7000 rpm mark and once you have taken her up there she’ll start squeezing your adrenaline glands dry.

It has been proven that a car can be quicker around a track than a motorcycle. So a CBR1000RR would eat humble sushi to a Skyline GT-R and a Ducati 999 would be working-class pizza to a hungry F430, if we are talking equally skilled driver/rider and sticking to say Suzuka or Monza. The big difference, of course, is in the corners, where the motorcycle has to slow down considerably while cars can take them at almost full tilt without losing speed. The bikes do catch up, terrorise and thrash cars on the straights, thanks to much better power-to-weight ratios, but then life only begins after the Mulsanne straight.   The Comet ridden by our own Marmarini is a quick weapon indeed, but then subjecting these machines to a PET (performance evaluation track) test wouldn’t have been fair on the motorcycle. Even at close to 200 bhp per ton, the Comet would have come to almost zero speeds at least twice in our PET track where the RS would have been going sideways. Even through the slaloms the car would have had an edge – trust us, the RS likes it sideways more than going straight! But on a drag strip?

We lined them up.
The Comets Korean rubber did struggle for traction a little bit but the launch seemed almost perfect as I could see an orange tail section next to my rearview mirror as the RS went on a long wheel spinning/ smouldering session. But when the Bridgestone Turanzas eventually found traction the first gear rocketed the RS well past 60 kph. We had recorded a time of 3.66 seconds for our road test (October 2004) but today was different. Maybe I should blame it on the cold tyres or myself for improperly launching the RS, the clock stopped at a marginally slower 3.98 seconds. The Comet, despite having to shift once to touch 60 kph, had the edge on the yellow whale of a RS as it posted a time of 3.69 seconds. Yes, the RS was humbled to 60 kph and the Comet held the sport bike tradition of humbling performance cars on a straight line. Round one to Shumi and Comet.

The RS was soon being fed by its turbocharger and the front wheels bit deeper into tarmac as I shifted the stubby gear lever to second. For a fleeting second the Comet had the lead, half a bike length, but still the lead. My eyes were fixed on the tacho as it was being hoisted to the 5000 mark. Can’t afford to over rev, 5500, 6000, 6500...it didn’t feel anything like an SU 31 going supersonic, but the speedo touched the 100 kph mark. The clock read 8.5 seconds. The Comet whizzed past too and we went on a slow down run. I knew the result and I knew it was pretty close. The RS won the drag as it posted a brilliant 8.5 seconds (slower than our test times again) while the Comet took a whole second more at 9.5 seconds to reach the point. One second. But one second that matters.

If you let things rip the RS would go on to a face-paling 220 kph while the Comet would throw in the towel at a decent enough 135 kph. As far as me and Shumi are concerned, we are very sure of what we want – I would love my office to give me an RS as a company car and Shumi wouldn’t mind stealing Kinetic showroom displays to possess a Comet.

What will it be for you? Before you decide let me read a note that Shumi posted on my computer – ‘For the price of an RS you can buy six Comets ...booo.’ Well that somewhat settles the adrenaline per
ton story, right?

Don’t worry, the bike vs car saga will continue and you are bound to see a lot of that action in these very pages. Till then...