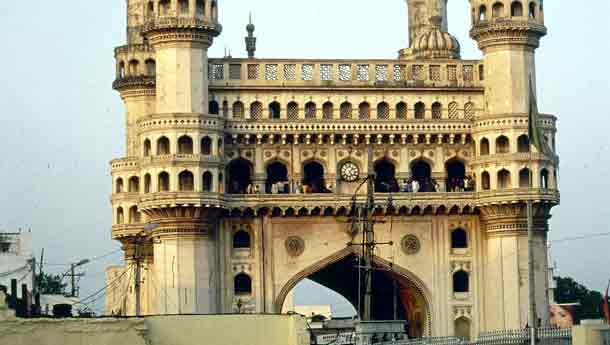 I get a bit of fan mail every now and then. My inbox occasionally has the odd ‘Gr8! Kp it up!’ and ‘i rlly lkd yr story on XYZ’ missive.On a good day there’s even a letter that’s coherent and which doesn’t take me the best part of a day to decipher, but it all counts in the end. Without, therefore, meaning to sound like a pompous git, I think I can safely claim that there are a few people out there who know me through my work. Even I, however, was slightly taken aback when I walked through the spike-laden gate of Hyderabad’s Golconda fort and was greeted by the sound of thunderous applause. ‘Now then Pablo, just a bow or two, a discreet wave and keep the thank you-s short’ I told myself. Of course, I was giving myself far too much credit.

People were clapping for all they were worth all right, but it wasn’t because they were in a state of heightened excitement upon having sighted BSM’s itinerant travel hack. They were all standing under the dome at Fateh Darwaza (‘victory gate’) and experiencing the fort’s extraordinary acoustic qualities, wherein the faintest clap at the entrance can be clearly heard at the Bala Hisar pavilion, the highest point in the fort lying almost a kilometre away. Of course, the racket they were making would surely have been heard in neighbouring Karnataka, but the point was that it was a practical demonstration of the fort’s most important form of early-warning. The architects’ brief must have been ‘See here fellows, if an ant so much as… well, you know… we need to be able to hear it up here.’ Beginning as a mud fort in 1143 AD, ‘Golla Konda’ or ‘shepherd’s hill’ (after a shepherd boy who found an idol here) evolved over nearly 300 years into a formidable and highly sophisticated fortress, with the aforementioned acoustics and an advanced water-supply system to boot. It stood proudly till 1687, when that old curmudgeon Aurangzeb defeated the ruling Qutub Shahi king and laid the place to waste. Nevertheless, there’s still a great deal to be seen inside, so I dodged the near-fanatical hand-clappers and set out for the summit.

I tell you, Aurangzeb and his merry mob would have been fairly out of breath by the time they reached the business end of the fort, because almost 400 steps stand between the bottom and the top. The view on the way up is first-rate, although I suspect the raiding party had more than pleasant vistas in mind. You can see clear out to modern-day Hyderabad, which, as I will touch upon later, isn’t that good a thing. At any rate, once at the top, you’ll find yourself in the Bala Hisar pavilion, a wind-swept, triple storeyed structure that was used as a durbar hall. You’ll also find another nifty bit of engineering – natural air-conditioning, made possible by a gap in the double walls that sucks in air and releases it into the hall via accumulated pressure. Hm, now I know why Aurangzeb wanted the place – the poor fellow was a little hot under the collar.

From the summit, I could see the massive domes of the nearby Qutb Shahi tombs, so I decided to go and have a look at them before heading back into the city. Set amidst gardens that could once have been described as picturesque, but that were now merely pleasant, the tombs were nevertheless singularly impressive. Dedicated to the memory of the seven Qutb Shahi kings who ruled Golconda for almost 170 years, these imposing structures are perhaps the best example of the fusing of the Indo-Persian and Deccani architectural styles. The Qutb Shahis were excellent structural engineers and went for substance over intricacy, as a result of which their buildings tended towards robustness rather than overt sophistication. I spent a while wandering around the grounds, until signs of imminent heat-stroke (it’s pretty hot here even in winter) took me back to the Bolero and its air-conditioned comfort.

Heading back into town, it was impossible not to look at ‘modern’ Hyderabad and think about what might have been. With the right mix of planning and aesthetic sensibility, it could have been a showpiece Indian city. Instead (and how many cities have gone this way?), it’s an unmitigated mess. All you see is construction activity, which isn’t necessarily a bad thing if what is being constructed is remotely tasteful – here, it’s all straight from what Bill Bryson calls the F*** You School of Architecture, with nary a thought given to blending into the surroundings. It’s as if the city lined up at a massive buffet table and, unable to decide what to sample, ate everything in sight. The result, naturally, was severe indigestion. Still, as I drove into the older sections of the city, there were redeeming features – the superb Osmania Hospital (surely the most attractive building to go and be ill in the country – externally, anyway), the Legislative Assembly and the Salar Jung Museum, to where I was headed.

A brief intro before I tell you about the museum. The Nizams of Hyderabad really, really liked their baubles. Over seven generations, they collected enough jewellery to out-bling every rap star on earth a thousand times over – and I’m not even getting into their hoards of bullion and hard cash. Indeed, Mir Osman Ali Khan Asif Jah VII, the last Nizam, was widely considered the richest man in the world in his lifetime. After India not-so-politely took over his kingdom in 1948, he formed two trusts to look after his jewellery collection, which they attempted to auction off in the 1970s. The Indian government stepped in and prevented the sale and, after almost 25 years of litigation, bought the lot for Rs 218 crore. That’s a tidy sum, until you realise that the collection is worth between Rs 1,800-2,500 crore. The incredible Jacob diamond, stashed away by the sixth Nizam and found by the last Nizam in the toe of a slipper in his palace, is worth almost Rs 400 crore by itself, so the government pulled a neat little swindle in the name of national interest. Nevertheless, at least you can now gawp in week-kneed wonder at the Nizams’ extravagances, all the while under the steely glare of AK-47 toting guards. The collection really is quite something; obscene in its sheer ostentation, yet breathtakingly beautiful. The rest of the museum (the largest one-man collection of objets d’art in the world) is no less fascinating, with displays ranging from jade artifacts to Egyptian relics to clocks of all sorts. If you like museums, as I do, you’re guaranteed a good time here.

All said and done, however, there’s only one place to go if you want to experience the ‘real’ Hyderabad – the Charminar. Bang in the middle of the old city, this Arc de Triomphe of the Orient has become synonymous with Hyderabad and is a quite magnificent monument. Hewn of the same rugged Deccani style of architecture as Golconda, it towers imperiously over the bustling streets of Laad Bazaar, giving you a superb view of the city as it once looked. Getting to the top is a bit of an adventure, since the steep, ultra-narrow spiral staircase means you have your nose perilously close to the buttocks of the person ahead of you (and someone’s got their nose close to yours), but it’s worth the olfactory dangers. Similarly, it’s well worth braving the crowds in the market and setting out to explore the area on foot. At first glance, the place is maddening; a sea of jostling humanity, a deafening cacophony of sounds and the general feeling that the end of the world is nigh. However, there’s an undeniable, irresistible energy to this madness that’s impossible to ignore. Caught in a traffic snarl of similar proportions, I would’ve felt somewhat homicidal, but here there was a frisson of excitement, a realisation that I was in the middle of something special. I walked around the bangle markets, the jewellery markets, past traditional attar shops, sticking out like a sore thumb with my cameras, receiving curious-but-friendly glances from hijab wearing women and generally having a right old time. As darkness set in, I followed the scent of fresh biryani to Hotel Madina, where I squeezed in among the punters and downed a couple of plates of Hyderabad’s best (the kababs weren’t half bad either). Hyderabad may have decided to get with the times and ‘modernise’, but I was pleased to find that it still had a strong heart and a vibrant soul.

Like I said earlier, the 'new' Hyderabad is no different from any other Indian city that's suddenly decided to grow, without first considering the aesthetic and infrastructural implications. In other words, it's a bloody mess. The traffic is among the worst I've encountered and all you're likely to see are malls and IT parks. The saving grace is the old city and the monuments in it. The Charminar is the most famous, of course, but don't miss the Chowmahalla Palace, barely a kilometre away and one of the nicest palaces I've ever seen anywhere in the world. It's been beautifully restored and is one of Hyderabad's hidden gems. The Macca Masjid, the second largest in India, stands next to the Charminar and is a slightly intimidating structure. Non-Muslims aren't allowed in past a certain point. The zoo is very well maintained and is the largest in India, although Kolkata's zoo also lays claim to this statistic. The Salar Jung Museum should not be missed, especially the Nizam's jewellery collection. Husain Sagar, the lake that bridges the twin cities of Hyderabad and Secunderabad, is a nice place to spend an evening. The Buddha statue in the middle of the lake is the largest stone Buddha in the world, with a rather interesting history. After it was completed, it was being transported to the middle of the lake when it sank to the bottom along with eight unfortunate souls. Officials didn't know quite what to do, so they simply let it lie there for two years, when it was salvaged and put up. You must, of course, go and stuff your face at institutions like Cafe Bahar, Paradise Restaurant, Hotel Niagara and Hotel Madina.