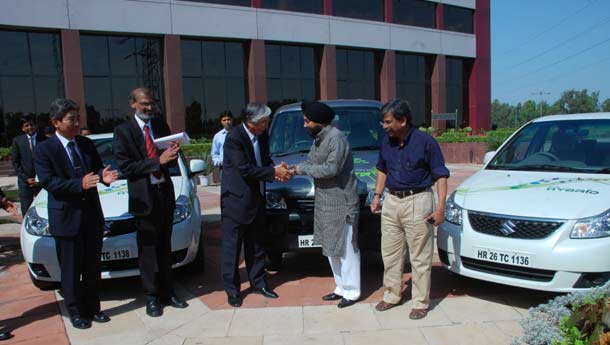 The country's largest carmaker Maruti Suzuki India today said it has developed the hybrid version of its premium sedan SX4, which will be demonstrated during upcoming Commonwealth Games (CWG).

The company has also developed and handed over an electric variant of the multi-purpose vehicle Eeco for using in the international sporting extravaganza, to be held on October 3-14.


In a statement, Maruti Suzuki India (MSI) said it will provide 10 hybrid SX4 and 4 electric Eeco to CWG as part of a demonstration fleet.

"I am happy that engineers at Maruti Suzuki have developed these future technology vehicles. This project has helped our engineers to increase their knowledge and enhance their R&D capability," MSI Managing Director and CEO Shinzo Nakanishi said.

The company said a team of 25 engineers worked on this project with global hybrid technology and component suppliers. The concepts of these vehicles were showcased at Delhi Auto Expo 2010.

Hybrid technology utilises conventional fuel along with fuel cells (batteries), which could be used alternately to power a vehicle, and is considered eco-friendly.

MSI claimed that while the SX4 hybrid offers 25 per cent more fuel efficiency compared to the conventional petrol one, the Eeco runs around 100 km in a single charge of the lithium ion battery-powered engine.