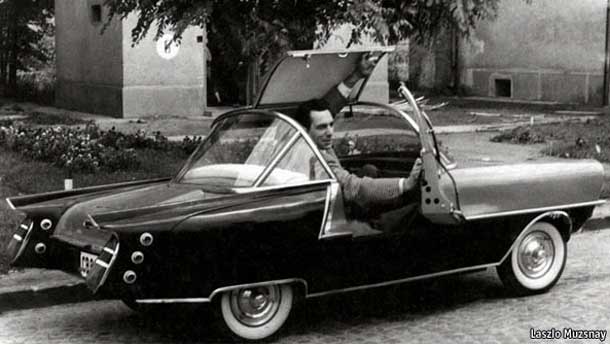 The Nano was born in happier times, in comparison. Even before the Nano was a germ in Ratan Tata’s mind, Hungary also tried to make people’s cars. These microcars evolved at a time when the country was under the yoke of Communist rule, in the 1950s. As it always happens with central planning, there was no economic freedom, and Hungary couldn’t make the decisions on the kind of things its people wanted. But some ingenious Hungarians decided to cobble together cars with whatever technology and materials they had access to. Today, these look like laughable caricatures, but in those days, they were a necessity.

Why am I talking about some random microcars, that too Hungarian? Well that’s because I came across a terrific article in a late-2010 Christmas special issue of The Economist yesterday. The article chronicled Hungary’s attempts to build tiny, economical cars that would evade the radar of the Communists powers. Like with our very own Nano that addresses the needs of our country, these microcars, if all things went according to plan, would have given middle-class Hungarians four-wheeled economical transport that offered weather protection. These cars never attained the scale that microcars from other countries, especially Germany and Italy, managed. They were comparatively a small-scale attempt, but the point is the people of the Hungary tried to do something about it.

These cars may be laughed as oddities, but that’s how things were in Europe in those days. These Magyar microcars, as the author of the story puts it (The Economist does not carry any by-lines or author credits), are a footnote in automotive history. But it’s important to know history for the sake of our future. Here is the link to the article; don’t miss it.