How Honda hit the sweet spot in India

Recently, Honda Motor Company said it will spend Rs 965 crore in adding two-wheeler and car capacity in India - a clear sign that the Japanese company expects the demand for its products to remain buoyant in the country.

In the last five years, Honda Cars' domestic sales have tripled, which has catapulted it to the fourth spot from the eighth in the pecking order, and Honda Motorcycle & Scooter has grown sales more than two-and-a-half times, which has helped it climb to the second spot, behind Hero MotoCorp.

A slew of launches, product changes, expanded distribution network, new production capacities and high-pitch marketing campaigns have ploughed the road for Honda in India in the last few years.

For 14 long years after starting its first Indian unit at Greater Noida, Honda Cars remained a low-volume player, though it had a premium image with products like the City, Civic and Accord sedans, and the CR-V SUV.

The situation turned particularly bad in 2010-11 when the devastating tsunami in Japan flattened many of Honda's suppliers, forcing it to cut production by at least half in India as component supplies dried up. Also, that was the time when buyers flocked towards diesel-powered cars, favoured for their low operational costs and high resale value. Honda Cars was the only manufacturer with an all-petrol line-up and thus found itself handicapped during this period - its first diesel engine came only in April 2013. Switching gears
It was in 2011 that Honda Cars launched the Brio hatchback and entered the mass segment. The Brio, a petrol-powered small car, competes against the bigger and more powerful Maruti Suzuki Swift on price. However, while the Swift sells around 15,000 a month, the Brio clocks on average under 2,000 a month.

But the Brio triggered a host of changes within Honda Cars. The company gained the confidence to enter the compact sedan segment and launched the Amaze to challenge Maruti Suzuki's dominance, whose D'zire sedan was the undisputed leader. This segment sells about 30,000 units a month, which makes it one of the fastest growing categories in the market. Since its launch in April 2013, the Amaze has clocked a 25 per cent share of the market, compared to the D'zire's 50 per cent.

Later this year, Honda Cars plans to launch a compact SUV based on the Brio platform. It will compete against the Ford Ecosport and Renault Duster, as well as the yet to be launched models of Maruti Suzuki, Hyundai and Mahindra & Mahindra.

Jnaneswar Sen, senior vice-president (marketing & sales), Honda Cars, says the company has aggressively focused on localisation in order to price its cars competitively. "The localisation in the Brio was more than 90 per cent. Since then, such efforts have helped us launch new products like the Amaze, City and Mobilio very competitively," he adds. The Mobilio, a five-door multi-purpose vehicle, is targeted at the segment bestseller, Maruti Suzuki's Ertiga. While 6,218 units of the Ertiga were sold in March, the Mobilio reported sales of 3,049.

Deepesh Rathore, co-founder and director, Emerging Markets Automotive Advisors, says: "Honda Cars' success is due to it entry segments which were one notch below its traditional domain. At the same time, the Indian car buyer has moved up one notch in his preference and now buys cars in the B segment. Together, the two factors have been a sweet spot for Honda."

On the two-wheeler front, Honda tasted success early with the Activa, an automatic scooter, which has been the leader in its segment for more than a decade.

With the Activa, Honda Motorcycle & Scooter met the needs of the urban buyer where traffic congestion is getting worse by the day. A gearless scooter is a much more convenient mode of transport compared to geared motorcycles in heavy traffic as it does away with the need to constantly change gears. 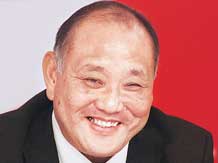 Keita Muramatsu, president & CEO, Honda Motorcycle & Scooter, says that in 2014-15, the company had set an ambitious target of 4.5 million sales in India and expand consumer touch points to 3,800. "We not only exceeded our targets but also managed robust growth of 20 per cent which was more than two times the industry's growth of around 10 per cent."

Honda Motorcycle & Scooter contributes 25 per cent of Honda's global sales, and India is expected to overtake Indonesia as Honda's top two-wheeler market in the next couple of years. For this to happen, Honda is readying for a big push into the rural markets. "We have aligned our product portfolio to cater to the demands of the rural customers," adds Muramatsu.

To develop products for India, both the companies have put heavy emphasis on research & development. Thus, Honda Cars is said to be working on a hatchback on a new platform developed by its research & development team based in India. It is yet to be decided if this new car will be positioned below the Brio.

"Honda has been able to increase its share of the market because of its better feel of the customer's pulse through introduction of new class-leading products that combine the latest technology with safety and the value for money proposition," Sridhar V, partner, Grant Thornton India, says.

By the turn of the decade, Honda hopes to topple Hero MotoCorp to become India's number one two-wheeler manufacturer. But the race to the top won't be a cakewalk. The Munjal-promoted Hero MotorCorp aims to double sales to 12 million units by 2020 (including 10 per cent coming from the overseas markets).

Some feel Honda needs to do more at the bottom end of the market. "While Honda Cars has grown at a fast pace, it is still regarded as a semi-premium car manufacturer. It needs to now break into the volume A and B segment hatchback segments successfully. Similarly, Honda Motorcycle & Scooter needs more volumes at the bottom end of the market to successfully challenge Hero MotoCorp," adds Rathore.