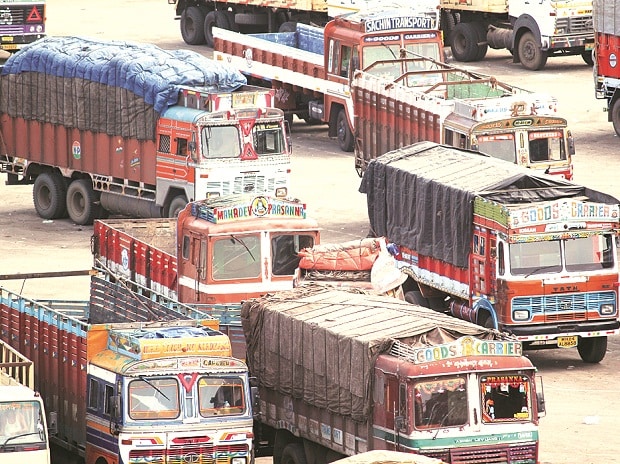 The medium and heavy commercial vehicle (M&HCVs) segment, which saw volumes grow 25 per cent year-on-year in the March quarter and 20 per cent in FY18, could face a roadblock in the form of easing overloading restrictions. Over the last few weeks, analysts say that overloading restrictions in states of Uttar Pradesh (UP) and Rajasthan have significantly eased.

Chirag Jain and Indarpreet Singh of SBICAP Securities argue that the easing of restrictions has already started impacting retail truck demand, product mix (demand-shift back towards lower tonnage trucks) and discounts in the industry. They highlight significant downside risk to consensus estimates of 12-15 per cent volume growth expectations for FY19 as a result of this development.


This is important because overloading restrictions have been one of the key reasons in addition to infrastructure spending on roads and mining, which have been responsible for growth for the M&HCV (trucks) sector.


After a two per cent fall in the first half of FY18, the sector recorded a 37 per cent growth in the second half of last year due to strict implementation of overloading restrictions in UP and Rajasthan among other states. A fifth of the growth was driven by the northern states with volume contribution rising to 35 per cent from 20 per cent in FY17; UP volumes grew three and a half times to 35,000 units in FY18. A Tata Motors spokesperson indicated that demand for large trucks in UP has increased to 2,800-3,000 units a month from 700-800 units a few months ago. Five-axle trucks now account for 60 per cent of the heavy truck volume compared with 10 per cent two years ago in this market. In this context, an easing of restrictions will have a larger impact.


The impact on earnings of any slowdown is likely to be even higher due to a weaker mix and bigger discounts, especially in view of increased truck production capacity, according to SBICAP Securities. Though demand has been robust, M&HCV players such as Volvo Eicher indicated post the March quarter results that the discounts continue to be high. This is driven by key players looking to gain market share and the trend is expected to continue in FY19, thereby putting pressure on realisations and margins for the sector.


Managing director of Ashok Leyland, India’s second-largest truck maker, Vinod Dasari said that strict implementation of overloading ban was not happening in a few pockets of Rajasthan and UP. He added, however, that the impact on Ashok Leyland would not be much given that the affected segments and markets are those where the company is neither dominant nor the strongest. The company estimates that if overloading restrictions ease in those markets, the impact will be just 1-2 per cent on volumes. The other issue which could impact demand is freight rates and rising prices of diesel. Though freight rates have been inching up since December, they are lagging the increase in diesel cost. Rating agency ICRA believes that while diesel prices have increased 13 per cent since December 2017, freight rates have increased at half that number. Analysts at Edelweiss Securities say that freight rates need to be monitored given rising fuel costs and could lead to postponement of replacement demand if rates do not rise. The other areas, which could pose some difficulty, is the availability of finance and resale value of trucks given the indirect impact from rising crude oil prices, the analysts add.

So far, there has been no indication of a slowdown with M&HCV volumes in April growing strongly on an extremely low base, given the pre-buying before BSIV norms came into play in the year-ago period. This could, however, change and the volume growth numbers for May-June would provide an indication.


For now, most brokerages are positive on Ashok Leyland, the only listed pure-play commercial vehicle player, given the company’s product portfolio, new launches, focus on defence, exports and spares as well as price hikes which will support elevated.


The impact, in terms of sales volumes, however could be more for other listed players such as Tata Motors, India’s largest truck maker, and Volvo Eicher. Though most of the profits for Tata Motors and Eicher are currently generated by JLR (Jaguar Land Rover) and Royal Enfield, respectively, there are some pressures building up. For instance, JLR has seen its profits come under pressure recently. Any pressure in Tata Motors’ trucks business would also offset the recovery (lower losses) seen in its India business, which includes passenger vehicles.


On the whole, any fall in demand would reverse the volume leverage gains in the truck business, skew mix and impact margins for all players in the sector.