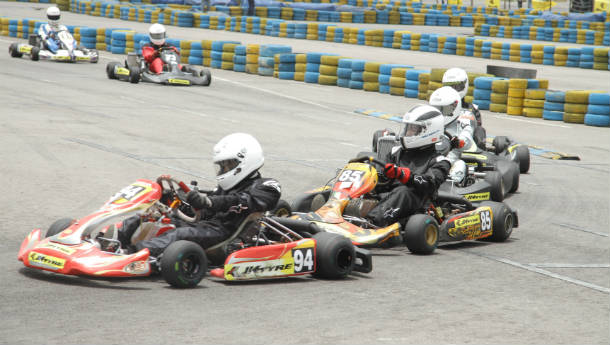 I was in Hyderabad recently covering the first round of the JK Tyre Rotax Max National Karting Championship. And after all the karting action ended, We, the media, were given a chance to race at the track. Now, we only got to drive the four-stroke karts rather than the completely mental two-stroke ones that the racers piloted and the course was shortned a wee bit, but that didn't stop us from wanting to get out there. Just before it was to begin though, the heavens opened and it started raining heavily. The cloud passed in a matter of minutes, but by then the track was completely drenched.

It was my first race, and though it didn't count for anything, I was still very, very excited. I had been on a track before (a go-kart track, of course) but racing with other people, that was a first for me.

It didn't matter that the track was completely wet, I wanted to go out and have a ball. They may have been the less powerful four-stroke karts, but they still came equipped with slick racing tyres, and with the pools of water on track, that was going to be a bit of a problem. And a problem it was, a lot of sideways action ensued during the race. I may not have been the fastest person on the track, but at the end of it all, I had a smile on my face that could be seen from outer space.

I do believe I am now hooked to this track-day phenomenon though. If it's even a little bit as fun as that Karting event, I'm down for it!