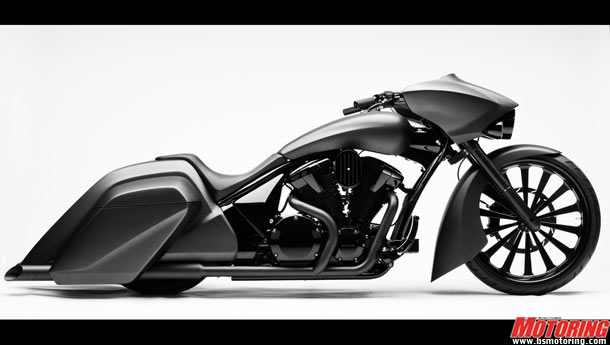 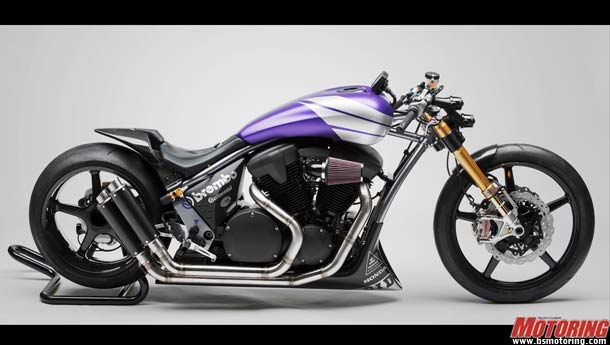 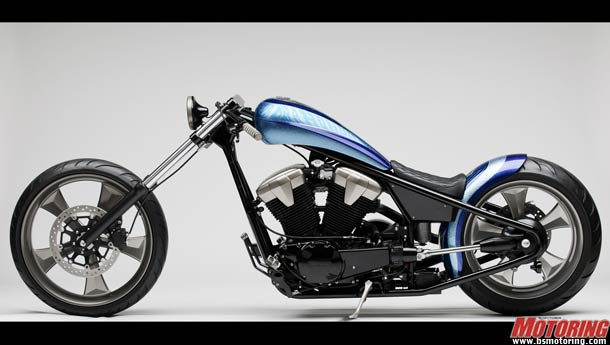 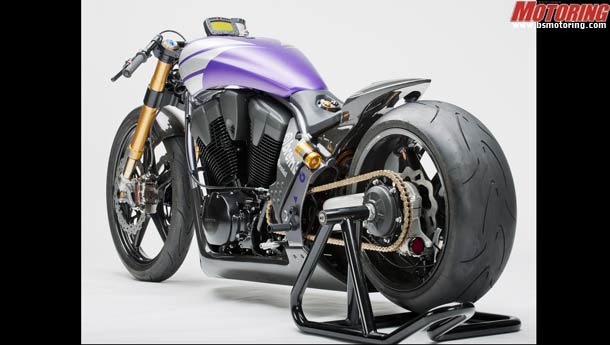 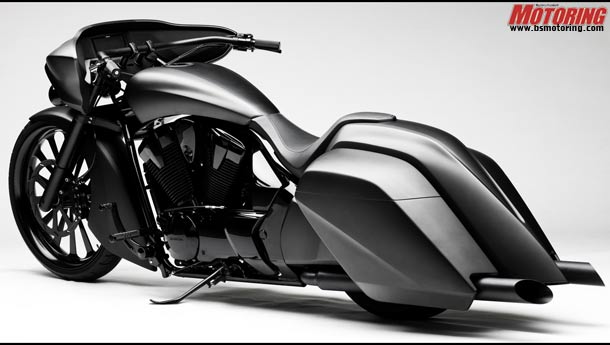 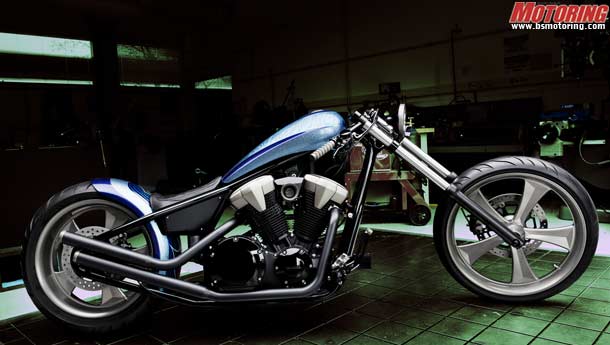 Think Honda makes boring motorcycles? This trio should make you think twice. These three motorcycles are what you get when Honda gives three young designers from Honda R&D Americas, South California, three motorcycles based on the 2010 VT1300 motor (namely, a Stateline, a Sabre and a Fury), a limited budget and tells them to go nuts. The only two rules - the bikes should be fully running motorcycles, not extreme-looking standstill models and secondly, they must stay true to ‘the core of the production vehicle’. If you ask us, we don’t know how these bikes manage to do that! Anyway, these bikes made their debut in December 2010 at the CA International Motorcycle Show and will tour the Americas in 2011, dropping jaws wherever they go. Go on, feast youreyes. And pray that Honda makes them and brings them to India!

The Honda Stateline transmogrifies into the Slammer. And it’s all about those swooping lines! Designer Erik Dunshee’s interpretation of the bagger style of cruisers, the Slammer looks like a creature of the night, almost like Batman’s weekend getaway bike! The bodywork is a fully custom job coated with a two-tone satin metallic black and pearl black finish, while the front wheel is a 23-inch piece. Looking at those long and low lines lend this bike a flow we will gladly beg to see in motion. And in spite of the overall minimalistic look, the Slammer boasts fully adjustable air-ride suspension, a multimedia head unit with satellite navigation and GPS speed display and a 500-watt sound system with a 10-inch subwoofer. We thought Honda said ‘limited budget’ somewhere...

Did anyone say ‘powercruiser’? Designer Edward Birtulescu took the Sabre and fashioned it into this, the impossibly sharp Switchblade! It’s his vision of a pro drag machine - wait a minute, we thought Honda said ‘stay true to the core of the production vehicle’. Oh never mind - we’re glad that he didn’t! Easily the maddest-looking of the trio, the Switchblade borrows cues from Formula 1 and MotoGP to scare away eventhe most hardcore of powercruisers available today.

The Switchblade features fully custom carbon-fibre bodywork along with a single-sided swingarm conversion. Even more to the point, it flaunts three-way adjustable racing suspension and racing-spec brake callipers and rotors that are mounted on carbon-fibre wheels - 21-inch at the front and 18-inches at the rear. To measure the Switchblade’s tarmac-ripping potential, it gets an onboard GPS laptimer and data acquisition unit. While we can see that it’s obviously built for obliterating straight lines, that tasty suspension/tyre combo gives us a glimmer of hope for corners as well. On second thought, forget it -we’d rather park it and look at it all day.

Designer Nick Renner shows those perennially squabbling Teutuls how it’s done by making the Fury become the Furious. This motorcycle is a dyed-in-the-metal chopper and makes no bones about it. Between the 23-inch front wheel and a 20-inch rear, the Furious showcases a 45-degree rake, a hard-tail rear and clean lines, both typical of the chopper cult. In keeping with its theme, it also gets a metal flake paint job with elaborate leafing as well. Completing the old-school look are those cycle-pedal footpegs and foot controls with motocrossstyle edges. That’s the old part.

However, the Furious also features five-spoke cast wheels with a design that is oh-so-21st century. And just look at the surface treatment and finish of the engine and cycle parts - it looks like a CAD rendering, not a real motorcycle! The modern-looking exposed shaftdrive also adds to this effect, and all of these elements fuse together beautifully to give you a best-of-both-worlds chopper. We’d love to ride this one down a crowded boulevard and watch heads turn!

Pity there are only three motorcycles for now, but we’ll keep bringing more mad machines to you in the future. Oh, and lest we forget, do tell us which one you like best in the comments section!