Honda's Amaze comes with an all- alloy diesel engine 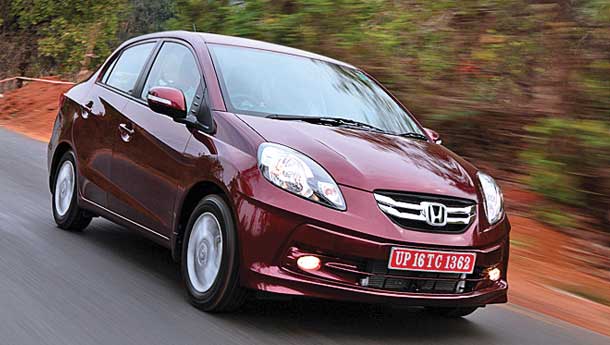 This is odd’, I thought to myself, as I started up the Amaze in the parking lot of a swish hotel in Goa. The car shook ever so slightly as the engine turned over, and then it settled into a bit of a clattery thrum, which intruded into the cabin. If you’ve driven a car from Honda, you will have gotten used to cabins that are almost eerily silent, so to hear (gasp!) engine noise in a Honda cabin was a new experience.

The noise is, of course, easily explained – unless you’re driving a high-end sedan, a diesel engine makes you aware of its presence, and the i-DTEC unit idling under the hood is Honda’s first diesel powerplant in India. About time, too – once the market leader, Honda sales have taken a beating because of the lack of a diesel option in the lineup.

I’ll begin with the meat of the matter, since you’re reading this because you want to know about the new engine. The 1.5-litre DOHC i-DTEC diesel is a variant of the 1.6-litre diesel engine that is found in the European Honda Civic, and it is an all-alloy unit; these units are inherently noisier than cast iron units, which partly explains the noise coming into the cabin, but in all honesty, the NVH levels could have been attended to better. Honda claims to have greatly reduced frictional losses, and has also put in a high-strength, lightweight crankshaft; the injection pressure is a high 1600 bar.

The diesel puts out 98.6 bhp@3600 rpm and 20.4 kgm@1750 rpm, and is a gem, not to put too fine a point on it. It pulls cleanly in almost any part of the rev range, especially lower down, and you won’t find yourself having to constantly change cogs. There are no sudden spurts in the powerband, and no turbo lag to speak of either, so driving the diesel is a relaxed experience, both in the city and out on the highway. Honda claims the diesel Amaze will be the most fuel efficient car in the country, bar none, which is quite a statement – I reckon it should be good for 12-14 kpl in the city and close to 20 kpl out on the highway, in real-world driving. The all-new 5-speed manual gearbox is slick and a joy to use, keeping up with the demands of the engine very well.

The Amaze also gets a petrol engine, the same 1.2-litre unit that you see in the Brio, with the option of an automatic transmission as well. Putting out 86.8 bhp@6000 rpm and 11.1 kgm@4500 rpm, the petrol is also very nice to drive – it manages to compensate quite well for the Amaze’s extra 20 kg over the hatchback. Those who want the typically refined, quiet Honda experience will be impressed with this version, which features slightly different instrumentation.

In this segment, the Amaze is by far the best looking car around, beating its immediate rival, the Maruti Dzire, on the looks front (although that is not saying much, according to some people I spoke to). This is primarily because the Amaze looks like the front
and rear end were designed by the same person – there’s nothing on the car that looks like it was added as an afterthought. The lines are neat, crisp and upswept, and most importantly, the boot is well integrated into the overall design – and what a boot! There’s 400 litres of space in it, which is more than some cars in higher segments. It’s a fresh looking car, viewed from any angle, and it gained a lot of attention on the roads of Goa, where we drove it. Its compact dimensions meant that it was very easy to park and manoeuvre through tight spaces, and the turning radius of 4.7 meters is rather good as well.

Honda engineers have pulled off a remarkable feat of engineering with this car. Despite it being a sub-4 metre car in length (3990 mm, to be exact), the amount of space in the cabin is fantastic. Even with the driver’s seat pushed back, a rear passenger who is near-six feet in height will be able to sit in comfort, without their knees jammed into the seat ahead. Similarly, elbow and head room (1680 mm overall width and 1505 mm overall height) are both very generous, and the cabin has a cheerful, airy feel to it – as a family car, it looks like it will acquit itself very well. The stereo is USB-based, as is Honda’s wont, and the A/C cools very well; overall fit and finish is quite good, without being at the level of the Honda City, but there are a few sore points.

The brown plastic used to garnish the dashboard is just plain ugly, and the glove-box doesn’t sit flush with the dashboard – its corners jut out in an unseemly fashion. The front seats could also use better under-thigh padding, in my opinion. In all other aspects, the Amaze’s cabin is almost identical to that of the Brio hatchback, and most buyers will have no real cause for complaint. The steering wheel is nice to grip, all controls fall nicely to hand and long trips should be quite comfortable in this car.

The Amaze, riding on 14-inch 175/65 tyres, has ride quality that’s on the soft side, which is understandable, given that it will primarily be used as a family sedan. With a full load of passengers, the ride becomes well settled, with less of the body roll that is evident with less weight. Around corners, the Amaze will satisfy most buyers – the steering feel is neutral, the brakes do their job well without quite being feedback-rich and the car ticks almost all the boxes expected from a vehicle in this category.

TO SUM IT ALL UP

The Amaze is a great product – there’s no doubt about it. Honda has done its research and produced a car that will appeal to a very wide array of people, and it has absolutely nailed the crucial aspects of space, practicality and a diesel powerplant; it will offer three variants each of the diesel and petrol The last crucial factor is of course price – if Honda plays its cards right and puts a tag below Rs 7 lakh on the basic diesel variant, there’s no reason that this car shouldn’t be the sort of success that the company is used to producing.