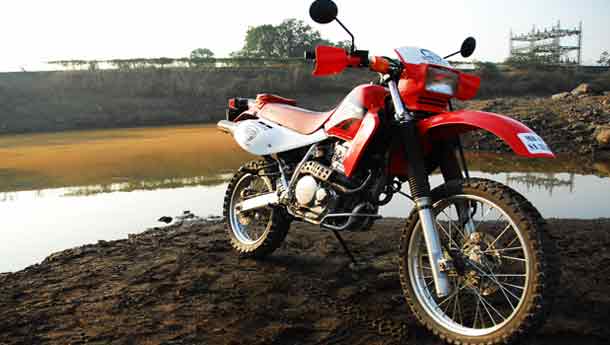 For those of you who have your jaw firmly planted on the table, pick it up and read on. Those who aren’t taken aback have probably experienced what too much throttle does to your pulse, not to mention your sense of well-being. If you’re wondering, I did manage to land rubber side down and ride into what I would like to believe was the Moroccan horizon at the Dakar, rather than the concrete jungle of Navi Mumbai.
Now that we have that out of the way, let’s go on with the story. The WB badge on the side might confuse you, but it’s just an indication that the bike’s owned by BSM’s stuntman friend Vijay Jain( the WB stands for Wheelie Boy). The motorcycle is the extremely capable and rather famous Honda XR650L, this one in particular a California model that has the Greens yelling just that little bit less.

Let me politely tell you that if you were one of those who had to stand on a stool to steal cookies, in your teens, this isn’t a motorcycle you should attempt to mount, let alone ride. The seat is more than three feet off the ground. Intimidated? Don’t be, because once you’re on you’ll be very comfortable and will really not want to get off. We rode with Vijay to New Bombay to our newly discovered dirt track, and it was quite evident that the motorcycle is not very confident on tarmac. I don’t blame it in the least, because those semi-knobblies are quite unnerving, especially when you find a ridge in the concrete on Mumbai’s streets. The moment we took the turn-off to our dirt track, you could feel the motorcycle change character – it was now at home. The 43 mm Showas up front along with the pro-link mono shock damped the bumps as the bike gracefully wafted through the mud trail lined by tall dry grass. Add a parched well and some mud houses and you could very well believe that we took the right turn from Panvel straight to Zouerat in northern Mauritania. Coma and Fretigne will catch up shortly.

No, I’m dead serious, there are two XR 650s in this year’s edition of the Dakar and what’s more is that the XR650L evolved from the XR600, the original Dakar dueller. And it is no less capable. In 2000, it was Honda’s fitting gift to the dirt riders who wanted to ride their dirt-tracker home rather than tow it at the back of a cager. In other words, it was Honda’s first dual-sports motorcycle. It wasn’t a world first, because Suzuki beat them to it with the DR,  but that’s another story. Honda also released an R version of the 650L, a motorcycle that has won every single Baja it has ever entered – the Baja 500, the Baja 1000 and even the one-off Baja 2000. Look it up if you must. Just to keep those badgers off your back, Honda slapped on a brilliant air-cooled 644cc motor, an electric starter and all other relevant bits to make the motorcycle road-legal. In fact, so similar is the L model that all the prescriptions to convert your L to an R involve a weight loss programme.

It’s time to stop blabbering and get on now. I’m not slight, not by the longest margin, but getting on can be quite a pain in the er... groin if you don’t do it right. But stretch properly and you’re just fine. The XR fires up quite easily, compared to the other off-road singles I’ve ridden. No hassles with the decompressor or anything, just thumb the button and the SOHC 644cc engine thumps to life. A characteristic thumper beat emanates from the California-spec exhaust. Wringing the throttle is a bit heavier than the Yamaha WR450F that we featured last month, but let the clutch out and yee-ha!! you’re on for the ride of your life.
You feel a bit odd at first about how high you are sitting, but once you’re on the pace it hardly matters. You’re on the pegs, so you could take away the seat for all it mattered. The air adjustable damped Showas were not adjusted fully, as this was the XR’s first outing in the dirt. We dropped the air pressure a bit; any softer and the bumps to the bars would have disappeared. But it’s set up for the street, so I can’t crib too much now, can I? Acceleration gets a bit out of hand in the dirt, with the crisp throttle (thanks to Honda’s Radial Four Valve Combustion technology) and the semi knobblies. Besides, I’m not that used to riding in the dirt. In time, you learn to control the wheel spin, but if I was on the hair-trigger throttled WR450F, the thing would have definitely flipped me over that crested jump. The XRL’s motor is super smooth, very composed and for an air-cooled motor it seems like it would outlive a cactus in the Sahara. It also churns out 4.1 kgm of torque, enabling it to tackle some of the steepest slopes we could throw at it.

The XR is a whole lot of fun on as tarmac as well. Vijay’s spectacular power wheelies were ample evidence of that. Slap on some street tyres and you’ll never have to get that front wheel down. But it’s the blast of wind that will really get to you on the street. It’s not a really fast motorcycle or anything, but a head wind of 120 kph (the fastest the bike can go) on your body won’t be a pleasant experience for too long a stretch.

What’s really unbelievable on a dirt bike, though, is how far away the earth can get when it’s time to get your feet down,  and the XR’s 147 kg of mass doesn’t help too much. End result? I almost toppled the motorcycle while chucking a U. So turning isn’t that much fun, but cornering a la motocross and you’d see me gassing the XR for as long as I physically could. The truth is I barely lasted an hour on the XR650L. Drenched in sweat, soaked socks and aching calves meant that I’m in no shape to last an endurance event. No, I’m not thinking of the Dakar, and the African desert, not yet at least. Just me, the XR650L and the sands of the Thar in Desert Storm 2007.