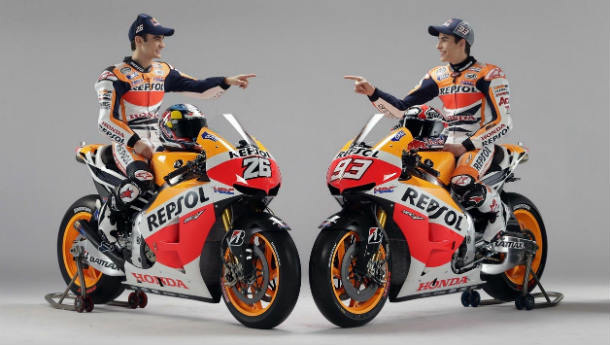 This is the motorcycle that Dani Pedrosa and Marc Marquez will pilot in their attempt at ensuring Honda manages to grab a World Championship title in 2013. The No. 26 and No. 93 motorcycles that the two riders will get astride doesn't look all that different in terms of livery - it's your standard orange, white, red Repsol colours - but keen observation shows the word 'Repsol' is now bigger and slants backward instead of forward.

2013 is the year that could see MotoGP's almost man, Dani Pedrosa claim a title. The Spaniard finished runner-up in the 2012 season, and really is running out of time in the premier class of grand prix motorcycle racing. There's no lack of faith on the part of the Honda team, though, with HRC president Shuhei Nakamoto stating that he believes Pedrosa could pick up right where he left off last season and make a serious assault on the MotoGP title this year. We'll be able to gauge his pace at the Sepang tests between the 5th and 7th of February.

Meanwhile, Honda has another quick rider that they hope will be able to make a big impression in MotoGP. Marc Marquez, who has won the 125cc title earlier and claimed the Moto2 title in 2012 is now a MotoGP rookie. But he's a rider the team has big hopes for, with Nakamoto even stating that he believes the rookie has a good chance of taking a podium finish on his very first race. Given the fact that the last time Honda hired a rookie, it was one Casey Stoner back in 2006 who finished his debut race second, they could well be right this time around. We can't wait to find out!