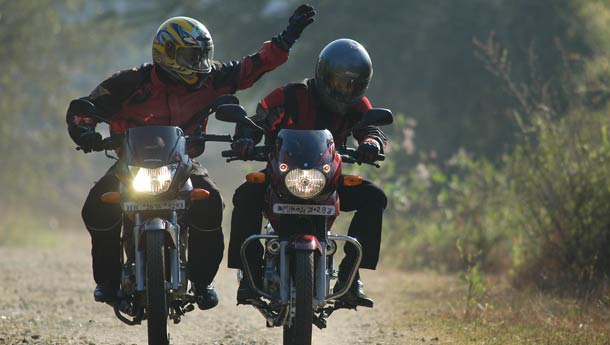 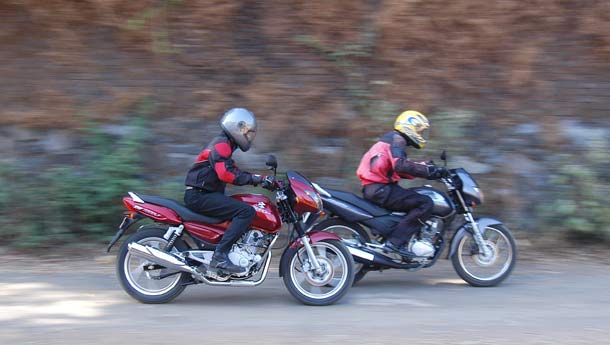 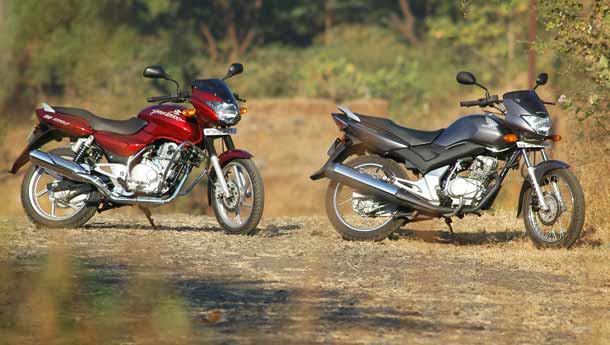 You’ve played Road Rash, right? For the uninitiated, the original PC game sped through a Hafeez Contractor-style multi-coloured landscape, where you and a bunch of bikers, on similar machines, raced to win. The central idea: anything goes, no blow’s too low and no holds’re barred. You kicked, chain-ganged, pushed, and shoved other riders while avoiding obstacles, pedestrians and cops to cross the line in P1.
That might sound suspiciously like a description of your daily commute, but it is almost totally representative of the acrimony the new Bajaj Pulsar 150 DTSi and Honda Unicorn are creating among the 150s. We thought about the TVS Fiero F2/FX, Hero Honda CBZ* and the LML Graptor for this test. But they’d be just making up the numbers.

For a quick recap, the new Pulsar 150 is a streamlining of the earlier DTSi model and sports minor changes. The swingarm and wheelbase are 10 mm longer, 17-inch alloy wheels are standard and seat height has dropped. On the engine front, exhausTEC makes a notable impact on performance and minor engine tweaking has resulted in more torque, and half a horse more on top. The Pulsar has built on its strengths, no doubt, hoping for some strong product from Honda.

Honda’s Unicorn isn’t the earth-shaking and paradigm-shattering 150 we were expecting. It is a motorcycle aimed squarely at the Pulsar, so you can’t take it lightly either. The Honda has the most sorted powertrain in the business today and the engine and gearbox are outstanding. The Japanese machine lays heavy emphasis on ‘safe’ choices for ingredients and aims for the largest possible cross-section of motorcycle buyers. So it comes with friendly handling,  well-damped ride quality and the promise of Honda reliability.

To business then. We started out riding the bikes back-to-back on a ghat section that is renowned for leading nowhere in particular (light traffic) and for a road surface that varies heavily, sometimes mid-corner.

It was quickly obvious that the monoshock is a selling point, but not always an asset to the Unicorn. The pros are that it feels very damped and compliant with a pillion on board  and is serene on good roads, even riding alone. However, riding quickly over bumpy roads shows up the shock as too hard. It seems to have too much compression damping, which makes it tough for the thinner 3.00x-18 tyre to stick to the ground mid-corner amidst bumps. The Unicorn, therefore, has to go slower than the Pulsar.   While monoshocks definitely are the way to go, the Bajaj makes a solid case for well-sorted twin-shocks. The gas-charged rear shocks and low stiction front telescopes work conspicuously well. Ride quality on good surfaces is feedback rich without upsetting the rider unduly. When the road begins to go bad, the shocks continue to work effectively. In the same corner, fatter rubber and greater shock-absorption ensure that the Pulsar maintains the neutral, confident stance, so you can hustle along without hesitation.

The ride quality alone doesn’t give the Pulsar a handling advantage. It also scores on cycle parts, like the smaller diameter alloys, and the low-n-narrow handlebars. The bars lower leverage, but return more feedback and allow more control. The smaller rims, though heavier than a 17-inch spoked equivalent, lower steering effort and make the 150 feel quite effortless.

The Unicorn also feels light-effort, but with a difference. The taller, wider bar puts more distance between rider and contact patch, which is nice trundling along at 60, but hides crucial information going ten-tenths and trail braking into a corner.

The Pulsar is ahead on ride and handling; down the straight highways, though, you won’t notice much difference. Both are bottom-friendly, despite the sportier tuck of the Pulsar.The most obvious difference in attitude are the approaches to powertrain and styling that Honda and Bajaj have chosen. The Pulsar is unashamedly sporty, while the Unicorn is safely, even meekly, styled to be attractive and acceptable.

On to the powertrain. The Honda’s engine is pretty straight-forward. The offset crank helps damp vibes and a ventilation system of sorts cools the head. The motor works very well. While the Unicorn is slower off the blocks than the Pulsar, you won’t really mind it that much. The engine feels so refined, sorted, unstressed and willing that you come to like the serenity of each fast or slow ride. The slick one-down-four-up gearbox is a fast friend as well, and the Honda surges forward with a low growl whenever you open throttle, no matter how badly timed the input.   In direct contrast, the Pulsar exhibits a lot less crank inertia and uses its twin plugs and resonance chamber to the hilt. The engine responds immediately and crisply to the wrist and likes to celebrate the sense of speed. The gain in torque is noticeable and the Pulsar is quicker everywhere. No changes in the gearing rob the Pulsar of the top speed crown, though.  We do wish that the 150 gearbox wasn’t all-down
and this time we will take away points for this. The shifts themselves are quite slick, but are so light that eventually you end up causing a mis-shift. It isn’t the bike’s fault really, but it keeps happening. Where the Pulsar trails the Unicorn noticeably is on noise. The Bajaj is better damped vibe-wise than the Honda, but it makes a carnival-size racket. It doesn’t sound like an Armageddon announcement, but it isn’t the welcome sound of trumpets either. This needs to be sorted out.

Who wins the shoot-out? First, Bajaj and Honda loyalists, please buy the Pulsar and Unicorn respectively and put ‘the other bike sucks’ stickers on... you won’t regret your purchase. The rest, wake up and listen. The Unicorn engine is friendly and likes to cruise, the gearbox is slick and it has a Honda badge on the tank. If you’re not particularly sporty and need only a frugal all-rounder of a 150cc to get to office, which happens to be down a good road, get the Honda. We’d recommend the F2 here, but it is comprehensively overshadowed by both of these bikes.

The Pulsar is the machine for the sportily inclined. It rides and handles better, manages broken surfaces more calmly and actually enjoys and provokes a thrashing. The standard alloy wheels look infinitely smarter, and make the 18-inch spoked rims look like they belong on one of Pablo’s Long Time No Sees. And unlike the cheap Chinese wheels people casually shell out upwards of Rs 3,000 a set, for, these Enkei’s are really very good. The new 150 (electric start) goes for Rs 61,617 on-road Mumbai, about Rs 4000 more than the Unicorn electric start and almost exactly the price you’d pay for the alloys at a Bajaj spare parts counter.

To take a longer perspective, over a seven-year period, at 11,000 annual km, we expect both to have only minor problems. However, we’d expect the more stressed Pulsar to age a bit quicker. Just so you know, Honda has the advantage in service quality right now, with overworked, overbooked Bajaj service outlets currently notorious for poor service, and even poorer customer treatment.

I almost wish I could do a buy-the-one-you-like standard ending, knowing that in this case it would be as near as dammit to the truth. But one bike must win, it’s an unbroken Motoring rule. In this particular case, by the tiniest of margins I vote for the Pulsar.

You see, the one thing I haven’t pointed out yet is that the Unicorn, unfortunately, is about as exciting as Microsoft Excel, while the Pulsar is as much fun as Road Rash.