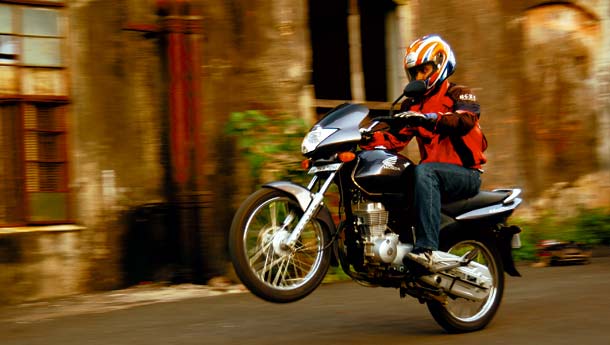 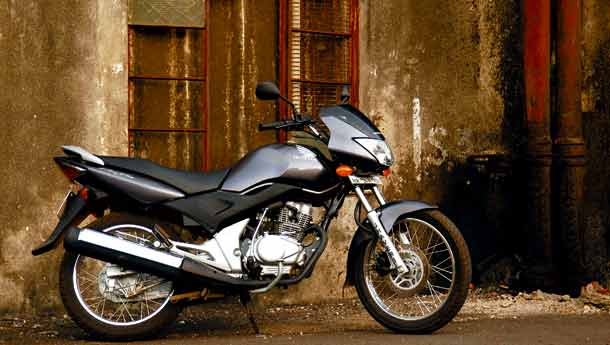 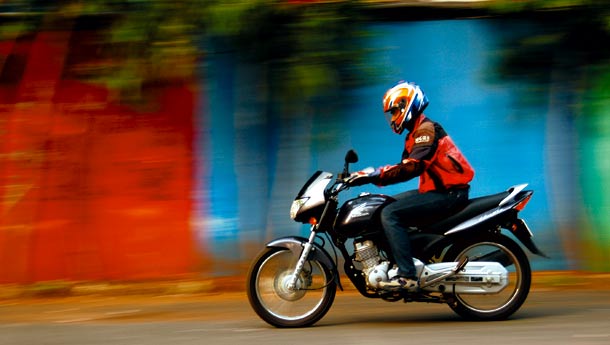 Let’s face it, it isn’t the most outstanding of names – Honda Unicorn. I think the internal designation, CBF150 is far, far better. Then again, we Indians seem unable to purchase any numbered product. However, the motorcycle the name points to is something quite special altogether.

To be frank, the fascination of the Honda Unicorn is practically lost on the spectator. You can look, stand back and squint for all you’re worth, and all that registers is that ‘bloody hell, that paint’s got a deep gloss, and the build quality is just too good.’ But that apart, the Unicorn nearly fails to impress on the styling front. Honda have chosen to play it very, very safe with the Unicorn, like they did with the Activa. The motorcycle is styled to be contemporary and more importantly, acceptable to everyone. The former it is, but only just. At some level, I am disappointed that Honda chose to burst on to the Indian scene with a motorcycle that looks as meekly compliant as this.

But hold your horses, for the action is yet to begin. The kick lever is irritatingly tall – you just cannot get to it with your foot. But after you’ve extracted it with your hands, only a half-kick is needed to wake up the all-new 149.1cc Honda motor.

And what a motor it is. The idling note is all but inaudible, and when you do hear it, it has a deep, gruff note that speaks of personality and upstanding moral character. Honda designed a motor which puts the emphasis squarely on making as much torque as possible, at as low rpm as it can.

So it isn’t a surprise when you note that the class-best 1.3 kgm is available at a surprisingly low 5500 rpm. What does take a bit of getting used to, is how well that works in traffic. In any gear, with the revs just below the half-way mark, plug the throttle and the Unicorn surges forward purposefully, delivering a smart turn of speed with minimum revs, a deep throaty engine note and no lag of any sort at all. The surges are quite addictive – instead of settling down to a steady, fast commute, you keep accelerating hard and then braking hard, just for the heck of it. When you do exercise some amount of self-control, the Unicorn makes a superbly efficient city cruiser, that will surf the traffic without any apparent effort. Part of the enjoyment are the brakes too. The 240mm KBX unit looks identical to the Pulsar’s, and delivers a rich world of feedback and has a strong progressive character that inspires trust.   Helping through the speed-brake-speed-brake commuting mode is a slick five-speed gearbox, with (thankfully) the standard one-down four-up pattern. The shifts are very slick, neutral is easy to find once you’ve got a few kilometres showing on the odometer, and ratios are well-chosen. Honda says they were able to run slightly taller ratios on the Unicorn due to the torque that the motor makes. This also keeps the revs down, which is great for fuel economy.

The Unicorn does not disappoint on that front either. Hold a steady 40 kph in top gear and the Honda will return a very acceptable 62 kpl. Open throttle mode will only drop that figure to 51 kpl. In everyday use, about 54 kpl which is pretty reasonable for a machine this big, and this quick.

Just how quick is it? The Unicorn will slash to 60 kph in 5.28 seconds, just a tenth off the Pulsar 150 DTSi’s time. But unlike the Bajaj, it does so in a composed manner, rather than the Pulsar’s stylish all-revs, all-business manner. The composure is very much evident even when the motor is singing a slightly metallic, but still throaty note nearing its 114 kph top speed.

The motor as you would’ve gathered by now, is a pretty responsive unit, which adds refinement to its likeable traits. However, it isn’t completely devoid of vibration. Honda has employed an offset crank to quell vibes, but I think the omission of bar-end dampers is an oversight. The bars always have some vibes in them, and while they’re not irritants on small trips, a 300 km ride will give you numb fingertips.

Now we come to the talking point, and the reason for the motorcycles name, the monoshock. The Unicorn uses a monoshock rear suspension, which mounts on top to the single-downtube frame behind the top tube. The frame uses the engine as a stressed member. The box-section swingarm is extremely long and the bottom of the shock mounts on top of the crossbar through which the pivot axle passes. The shock is done in a nice bright red colour, and most people will only just notice the gold coloured preload adjustment collar. Honda says the centralisation of the shock not only cleans up the rear end of the bike, it also brings the mass closer to the centre of gravity which has handling benefits.   Honda have chosen a much longer wheelbase than the Pulsar, and as a consequence, the Unicorn isn’t as quick to turn as the Pulsar. However, the wheelbase and the length of the swingarm bring to it stability levels to high, that the motorcycle does wonders for the rider’s confidence. Even in complicated corners, the Unicorn will hold a steady line, and yet be effortlessly responsive to tweaking, tuning and altering the line if you so wish. The front end does feel a bit heavy, and a lower handlebar would’ve helped further, but the machine is very neutral. A chicane type of situation needs only a small amount of effort to flip the bike the other way.

But the ride quality isn’t the next big step, unfortunately. The Unicorn’s rear shock is a pretty stiff unit. Over poor and broken roads, it has a well-damped feel to it, there isn’t any harshness at all, but the Unic does move the rider around a bit. I’m not saying it is worse than the Pulsar, but the Karizma definitely rides better than the Unicorn. Backing off the standard preload by two notches did help, but sharp edged bumps will return spikes to the rider.

However, the overall mood of the motorcycle is very eager and I like it for that. Its composure is immensely enjoyable, especially when you’re booming along at almost illegal speed, but without any apparent mechanical effort on part of the engine. The handling too is very likeable. I would have loved for the Unicorn to steer even quicker, but neutral stance and stability do have their own virtue and you can make progress with great faith in the machine. The brakes too are superb and while I have to use three fingers (the KBX unit on my test bike is a bit spongy), the Unicorn always stops just before you’ve planned.

So, while I do have a bone to pick with Honda on the unadventurous styling, I am quite happy with the Unicorn. The weaknesses of the machine are pretty obvious. First of all, there isn’t an engine kill switch, which is sad. Then, there isn’t an electric start version, an oversight. However, we are told that the e-start version should be in showrooms around the end of this financial year. Given than current Unicorn booking queues point to deliveries around the new year, it might be worth the wait to pick up the thumb-start version instead.

But should you buy one? Oh yes, we highly recommend the Unicorn as a good value proposition in the 150cc segment. Is it better than the Pulsar 150 DTSi? That is a question to be answered at a later stage. However, what is obvious is that Honda has done a Qualis. They’ve created an excellent machine, built to the customer’s own specification, styling isn’t all that hot, but won’t cause controversy and it delivers almost everything it promises. Just the ticket to sales success, no?

As far as the name goes, you can always get someone to peel the slashy Unicorn decal off the tailpiece, and substitute with a simple CBF150.