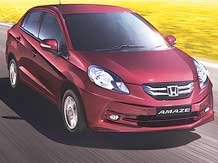 Atsushi Arisaka, chief engineer, large project development, Honda R&D-Asia Pacific, said, "We are looking at a diesel engine with engine capacity between one and 1.2 litres. Once developed, it can be used on small cars."

While Arisaka declined to specify a timeline, company sources said a final product usually comes out two to three years after a project starts.

The small diesel engine plan is strategic, as it aims at doubling sales in emerging markets, including India and China, to three million units annually by 2017. On Thursday, the Japanese auto major had launched a diesel-powered entry-level sedan, Amaze.

Honda has recently introduced the 1.5-litre i-DTEC (exclusively developed for the Indian market) engine. But it has no plans to use this in existing products. The 1.5-litre engine would be sequentially adopted on newer products, including the new City, the Fit (Jazz) and utility vehicles. The smaller diesel engine would be used to power entry-level cars, said industry experts.

Honda's initiative could throw a major challenge to heavyweights such as Maruti Suzuki and Hyundai Motor, which have had a stranglehold on the small car market in India for over a decade. Maruti Suzuki commands 48 per cent share in the compact car category. Korean auto major Hyundai has a market share of 22 per cent.

While Maruti Suzuki sources its 1.3-litre diesel engine from Fiat, Hyundai's i20 is powered by a 1.4-litre diesel engine. Both companies are reportedly working on bringing small diesel cars to the Indian market, where 58 per cent of new-car sales are in diesel.

A smaller diesel engine would give Honda, which has a market share of 2.9 per cent in the small car category, a boost in volumes in the compact car segment, which accounts for about 60 per cent of passenger vehicles sales.

Hironori Kanayama, president and chief executive officer, Honda Cars India, had hinted the carmaker was exploring the possibilities of a model below the Brio compact. "With economic development, there is an increased consumer preference for more expensive cars, resulting in a demand boom for utility vehicles. But that is not the only case in India. There are a large number of people who want to own cars, and because of such first-time buyers, the compact car segment would continue to generate demand. While a final decision has not been taken, we are studying the market below the Brio," Kanayama said.

To oversee the rapid ramp-up of India operations, the Japanese auto major has also changed its global organisational structure.

HMC has appointed Yoshiyuki Matsumoto, managing officer, HMC, as representative of development, purchasing and production in the Asia & Oceania region. He will be based out of India and will oversee operations at 25 companies and 11 research and development centres. He will also head all group companies in India.

Honda Cars India, which till recently had an all-petrol line-up, has seen its market share dip due to competition from global players.
THE ARSENAL
Entry-level sedan Amaze The 1.5-litre i-DTEC engine developed exclusively for Indian market Revamped global organisational structure Proposed: Engine with reduced capacity to power small cars in emerging markets; could take three years Proposed: A model below the Brio compact