Honda on track to be a hero 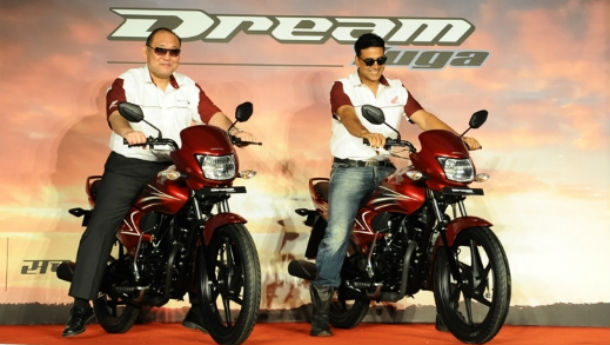 A year after an open battle, Honda Motorcycle and Scooter India (HMSI) has deftly moved ahead of Chennai-based TVS Motors and Bajaj Auto to claim the second slot in the world’s second largest two-wheeler market.

Steering the drive is the company’s first ‘serious’ mass offering in the commuter segment, ‘Dream Yuga’ that was launched earlier this year. Dream Yuga is the first step for Honda to achieve its stated intention of claiming the crown from estranged partner Hero MotoCorp over the next eight years.

In this period, the Indian subsidiary’s contribution to the global revenues of parent Honda Motor Corporation’s two-wheeler venture is expected to more than double to 30 per cent. The complementing volumes would come in from both urban and rural markets, from premium as well as mass products as Honda launches its offensive right where Hero MotoCorp has maintained a stranglehold for over a decade.

While Hero MotoCorp, with half a dozen odd products ranging from best sellers Splendor and Passion, accounts for three out of every four motorcycles sold in mass commuter segment (where 70 per cent of the 10 million motorcycles were sold in 2011-12 ), Honda with ‘Dream Yuga’ and CB Twister has only now begun to gain ground in the category.

Honda President and CEO Keita Muramatsu has hinted at more workhorses to build the ranks over the next two years. Aggressive distribution plans have been outlined to take the war to rival territory.

At the onset itself, there seems to have been a casualty.

For the four months ended July, while Bajaj Auto sales (which has trailed Hero for a decade) slid by 0.78 per cent to 819,024 units, Honda grew volumes by 55.36 per cent to 849,767 units. Interestingly, nearly 60 per cent of Honda’s sales came from scooters – a category Bajaj had pioneered with geared models Chetak and Super and which it has exited.

It has been more than two years since Bajaj opted to walk out of the segment. Honda, with a share of around 52 per cent, now reigns supreme the market with gearless avatars Activa and Dio.

Bajaj, however, is unfazed and maintains that the company would establish itself as a motorcycle specialist and stay away from the scooters despite the growth levels in the industry. K Srinivas, president, motorcycle business, Bajaj Auto, says, “As the world’s third largest motorcycle manufacturer and by far the most profitable manufacturer, we are indifferent to the sale of someone else’s sale of scooters and mopeds and that too at undisclosed profit levels.”

However, the going has been tough for Bajaj with demand for motorcycles slowing across urban as well as rural markets over the last few months. Between April and July this year, motorcycles sales in the country grew by a moderate six per cent to 3.45 million units compared to the scorching growth pace of 23 per cent recorded a year back.

Srinivas points out, “The motorcycle industry has been showing signs of slowdown right from November 2011. Bajaj Auto read the signs early and as per our policy we have been billing only what finally gets retailed. We have very good reasons to believe that not all other manufacturers have followed this philosophy. If all others had also billed as per retail the industry would show negative growth which is itRs s true reflection.”

Wholesale numbers for Honda show the company’s volumes in the motorcycle segment have gone up by 57 per cent to 363,006 units.

It is true the growth has come on a low base but Honda is expanding rapidly and is hoping to grow numbers by 30 per cent to close the year with sales of 2.75 million units. Of this, 300,000 units are projected to come from ‘Dream Yuga’.

Yadvinder Singh Guleria, operating head (sales & marketing), Honda informed, “To bring in numbers from rural markets, we need the right products which we have done with the Yuga. We are backing this up by expanding our distribution network. We had 1,500 touch points at the end of FY12, this would increase to 2,000 outlets by the end of this financial year.” For Hero MotoCorp, nearly 45 per cent of its annual sales of six million units came from the non-metro areas in FY12.

To cash in on the potential in semi-urban and rural regions, Bajaj Auto had driven in its ‘Bharat Bike’ — the Boxer — in August last year. Though the product did not find much favour among consumers in such areas, the company has left no stones unturned in extending accessibility with its 600 dealers and 2400 sub-dealers. Bajaj Auto is fighting hard to script a comeback.

Srinivas says, “With new products — Duke 200, Pulsar NS and the Discover ST — we are already seeing traction in retail even with their limited availability. In July, the domestic market share has already climbed by 100 basis points. We should further move the market share as the availability of these products improve.”

The sales volumes for the Bajaj and Honda are not strictly comparable as Bajaj exported as much as 472,457 units during the quarter which accounts for over 36 per cent of its total production. Honda’s exports at 36,510 units constitute a meagre four per cent of its overall sales presently.