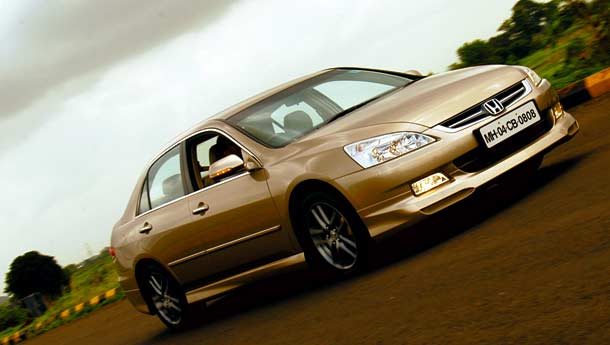 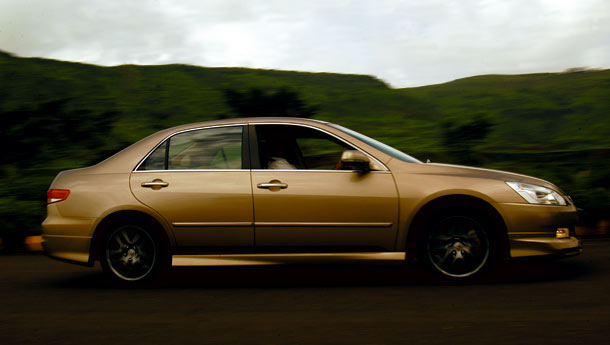 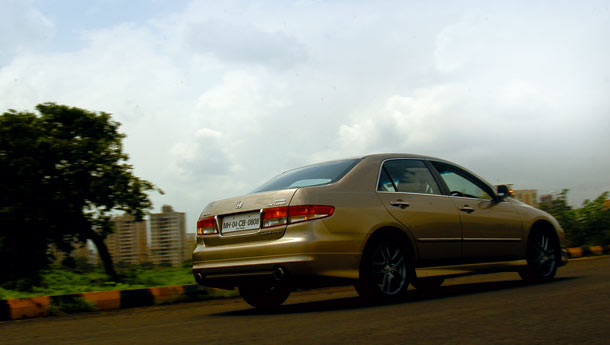 Japan is a closed society. Some might even say it is repressed. On the face of it, all seems well. Everything is scrubbed clean and shiny, people are polite and well-mannered, and are inclined to obey the law at all times, children study very hard and aspire to obtain stable jobs with large corporations, and car manufacturers are ‘socially aware’ and build ‘responsible’ cars. It’s so peachy, you’d be hard pressed to believe it’s true. And in some cases, it isn’t. Behind some of those placid, inscrutable oriental faces – trained to bob and smile dutifully at most times – there lies the urge to break some rules, have some fun and stir some hell. And as far as cars are concerned, that’s where specialist tuning houses like Mugen come in, but we’ll come to that in a minute.

Honda have been on something of a roll, with the Accord. First, they gave us the very smooth and refined 2345cc i-VTEC inline-four, with 142 horsepower – which should be perfectly adequate for most people. For those who weren’t satisfied, Honda then brought in a V6. The Accord 3.0 VTEC V6, with a 2997cc, six-cylinder engine that makes 221 bhp, and has the capability to do 220 kph down a long, straight stretch of road. In almost all independent magazine tests worldwide, the Accord V6 beat cars like the Toyota Camry V6, Nissan Maxima, Ford Falcon Futura, Mitsubishi Diamante VR, Holden Commodore Acclaim and Hyundai Grandeur XG. Which also means it’s beaten pretty much everything there is, in its segment. And yet, there’s just no pleasing some people. Mohan Mariwala (who heads Auto Hangar and Linkway Honda, dealerships for Mercedes-Benz and Honda cars in Mumbai), for example, who’s gone to the trouble of sourcing Mugen bits for his Accord V6.

So coming back to Mugen, the company is often perceived to be the ‘performance tuning division’ of Honda (the way AMG is, for Mercedes-Benz), but is actually an independent operation. Hirotoshi Honda (Soichiro Honda’s son) owns a major stake in Mugen and is also involved in running the company. Based in Asaka, in the northern suburbs of Tokyo (close to the Honda research and development facility in Wako), Mugen have long-term plans of building their own road cars someday, but for right now, they have a single-point agenda – to make and sell the best performance-enhancing parts for Honda cars. With movies like The Fast and the Furious, computer games like Need for Speed – Underground, and a bustling street racing scene in Japan and the US, there is no dearth of young people who can’t wait to snap up all the skirts, spoilers, engine management chips, sports exhaust systems and big alloys which Mugen want to peddle.

Honda’s VTEC (Variable valve Timing and lift Electronic Control) engines are already known for high-revving performance and high specific power outputs, but stock Honda engines also take into account factors like fuel efficiency and noise levels. Mugen have scant regard for such mundane concerns. Performance is their holy grail and they go all out to extract the last bit of oomph from any given set of pistons. When we first tested the (stock) Accord V6 in March this year, I had come away impressed. That Honda’s 221 bhp has this way of blasting you to insane speeds in no time flat, without breaking a sweat and without ever seeming to work hard, which is so... um, grin inducing.   If the stock car makes me grin, Mariwala’s Mugen-fettled Accord makes me want to laugh out loud. All the time. The happiness starts with just looking at the car, which, with the Mugen bodykit, and two fat exhaust pipes poking out of the rear end, looks suitably butch – don’t mess with it. Wheels are 10-spoke, 17-inch alloys in ash grey, and look the business. My only grouse is, the car could have been made to look even more over the top. A large spoiler on the boot, and a different colour (white, black, or red) would have been more suitable for a car which bears a Mugen badge behind. And even 17-inch alloys aren’t enough to really fill out the car’s wheel arches – 18-inchers would have been ideal, though I admit ride quality would probably suffer in that case. But even as it is, the car looks totally wired, totally very-da-cool.

Where the cool stops and the heat gets turned on, is the way this car goes. Start it up, pump the go pedal, and the deep rumble of the Mugen exhaust makes it clear that this is no garden-variety Honda. And the stopwatch confirms that. The stock Accord V6 goes from 0 to 100 kph in 7.99 seconds, the Mugen Accord does it in 7.75 (and here I’ll also mention that we had tested the stock Accord in perfectly dry conditions, while it was raining during the Mugen Accord’s test, and traction was less than ideal.) Where the enhanced engine performance really tells is in-gear, roll-on acceleration numbers. The stocker does the 80-120 kph sprint in 5.77 seconds, the Mugen in 4.79, and the figures for the 100-140 kph run are 7.52 seconds (stock) and 6.63 seconds (Mugen) – so you know the hop-up is working. In fact, the Mugen Accord’s acceleration feels so much more fierce than the stock car’s, it’s beyond what mere stopwatch numbers can express. When you floor the pedal on the Mugen, it demands all your attention, undivided, and uncluttered with thoughts of sex, booze or anything else at all. You wouldn’t want to be caught napping at 240 kph (that’s what the Mugen Accord is capable of), would you?

What goes into the making of such ferocious performance? At the time of testing, Mariwala’s car was running only the Mugen exhaust system (the chip which changes fuel-injection mapping and ignition timing was due to be installed in another week or so), which is supposed to liberate about 20 bhp. When the said chip is also installed, Mariwala says the power would go up by another 20 bhp, so we should have a 260 bhp Accord then. Very nice!

Personally, I love the power and the booming exhaust note and the Import Tuner bodykit, but for me, the best (and rather surprising) part is that the car also handles much better than the stock V6. I say surprising because Mariwala says no changes have been made to the car’s suspension – it’s running all stock settings. Well, whether it’s the 17-inch wheels or the VR-rated, very low-profile, 225/45 Michelin Pilot Preceda tyres, I don’t know, but the steering felt more connected than it is on the stock car, turn-in is much more crisp, and a lot of the understeer seems to have been dialled out. Yes, it’s baffling...   We asked Mariwala about the money he’s spent in doing up his car, and he says about Rs 3 lakh. Which means for around Rs 22 lakh (on-road, Mumbai), he has a car which will keep up with a Mercedes-Benz SL500. Well, almost. And while it’s at it, the Mugen is as smooth, civilised and supremely reliable as any stock Honda – you get the best of both worlds. Now the only question is, Mr Mariwala, how about a NOS kit and a turbocharger for this Mugen? And a custom paint job and a rear spoiler and 18-inch wheels and...

Why a Mugen Accord?
It’s all about the passion, the love for cars. The Mugen Accord is understated, yet the performance is scintillating. I really love it, more people should know about this car!

What all comes with the Mugen kit?
There’s the Mugen exhaust, the engine-management chip, the Michelin tyres, and 17-inch wheels. I paid about Rs 3 lakh for the lot.

What’s next? Any more performance upgrades?
Oh, I’ll put in a high-volume air filter, look at different fuel injection mapping options and have a full tune-up.

Apart from the engine, do you also plan to upgrade the suspension?
For now, I’ve stuck to Honda settings, but in the future, let’s see if I can get Type-R settings on my car. As it is, the car handles quite well. I’m quite satisfied.

Any plans to make this kit available to other Honda buyers?
No, the Mugen kit is not for sale. Honda are very particular about such things and for now at least, I am not looking at selling any performance enhancing kits in India.

The Lords of Darkness

As with cars bearing names like Veilside, STi, or Nismo, cars carrying the Mugen tag also come into their own only after darkness has fallen. That’s because Mugen parts cater to the much forbidden need for speed. They work in close technical collaboration with Honda and see to it that Honda owners are never short on aural, visual, and performance theatrics from their cars.

The company was founded in 1973, by Hirotoshi Honda and Masao Kimura, with the intent to design and develop competition engines for sale, and also to develop performance-enhancing parts for Honda road car engines. Hirotoshi built his first racing car way back in 1965, before he had even graduated, and Kimura is a veteran of dozens of race victories in Honda sportscars and single-seat racers. The latter has also worked for Honda R&D, and then, the Honda Racing Service, before he helped Hirotoshi establish Mugen.

Working with Honda, Mugen have worked at various levels in organised motorsport – they have been very successful in Formula 3000 and even produced a 3500cc, V8, F1 engine (codenamed MF350). Mugen have also worked on Honda V10 F1 engines for various F1 teams, including Ligier, Tyrrell and Jordan. In fact, Mugen’s first F1 victory happened in 1996, in Monaco, with Olivier Panis driving a Ligier.

Though Mugen continue to do well in F3000, they pulled out of F1 after 1999, when Honda announced they would be competing with their own engines in 2000. Ultimately, Mugen hope to be able to build their own sportscars and at one time, even did extensive work on the Mugen NSX prototype. We love their work and hope we get to see more of them in India.