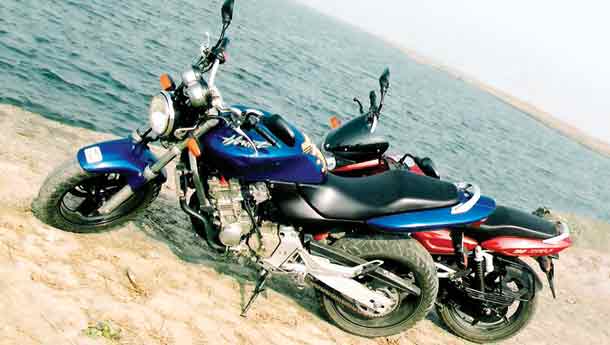 So many times things turn out exactly the way you never thought they would. And you end up venting your frustration with unprintable versions of exclamations like darn – especially one that’s the same length as ‘darn’ but infinitely more weighty... and versatile. There are, of course, other things that do turn out exactly the same way, but the end result is a very agreeable ‘Wow!’ or ‘So cool!’

While you are pondering that rather weighty thought, imagine this. Two really bored men hit the outskirts of Kolkata (you have to be politically correct, no?) on two very different machines one early morning. One of them belongs to my friend Nitin, it’s a new Bajaj Pulsar 180 DTSi, complete with all black powertrain and wheels and deep lava red paint. It’s a genuine, proper motorcycle all right, and it has enough personality to turn on your dark side.

The other is a Honda Hornet 250, wearing its gnarly motor proudly and a coat of blue and black. Its piece de resistance, specific to Indian onlookers, is the stock 180-section rear tyre, which never fails to generate a standard response: ‘What the...?’

Before riding in earnest, we stopped for a round of tea, which soon became two rounds, as we fielded innocent, slightly amusing, questions from village folk about the Tata Sumo tyre the Hornet was ostensibly wearing. It wasn’t supposed to be a comparison and all, but we ended up riding the machines over a variety of surfaces and at various speeds. Hey, this comparison stuff these magazine chaps do is a lot of fun!

It is a common notion that a multi-cylinder imported motorcycle will automatically wilt an Indian bike, and the latter will automatically be a wimp. It’s almost too easy to write gut wrenching lines like ‘I blipped the throttle of the Hornet 250 and blew everything on wheels into the weeds, and everything on legs into outer space!’ But was that really the case? We were about find out how India’s best premium performer stacked up.

Sit astride the Hornet, and you are immediately aware of the bulky feel. The tank is massive and feels great to hug. The entire machine looks and feels compact, tight and thickly packed. You can’t take your eyes off it. Punch the starter button and it brings the small four-stroke inline four to life instantly. No howl, no scream, just a hurried buzz from the motor, its four pistons hammering quietly away beneath layers of metal and behind rushing channels of coolant. Snick first and roll away. There is no waiting for the revs to build up. The Hornet pulls instantly and the ratios from here on are short and sweet. Get to sixth in a hurry, and you’re chugging along smartly doing 60 kph at 4000 rpm. Lots of us Indians rely heavily on the motor’s note to ride. When we feel the engine feels hurried, we shift up. On the Hornet, that habit has to be broken. For the Honda always sounds hurried. And if you think 4000 rpm is just a bit below the halfway mark for the Pulsar, get this: the Hornet is redlined at a mind-boggling 13,500 rpm.

The Pulsar is no slouch either. Start her up and finally, a relaxed, unhurried engine note. Compared to the smooth buzz of the small four-pot Honda, the Pulsar actually sounds like a thumper. Let the clutch out and the power delivery is smooth all the way and through all gears until the speedo just crosses 100 kph. After that you begin to see the signs that say ‘approaching limit.’ That is perhaps the most crucial differentiator between the two bikes. Both get to 100 kph without effort, but the Hornet keeps the same sort of easy speed almost up to 160 kph. Which, most of the time, is too fast for India.

Riding one after the other, the 100-section rear tyre on the Pulsar feels a little weak. Would a 120 have been better? [Actually, no. The stock tyre feels less able due to one reason. First, Indian tyres are designed to last almost 35,000 km, which is more than twice the Hornet’s 10,000 km life. So they have harder compounds, and which are less grippy. Second, a 120 would mar the P180’s agility into corners and give a slower, more staid feel.] The Hornet, in comparison, is effortless. The 180/55ZR17 tyre bites into the tarmac with the intensity of a late brunch.

But picture perfect roads don’t last in India, right? Over the rougher stuff, the Pulsar shines. It feels a lot more composed and it absorbs ruts and bumps with ease. It just goes on blazing through the stuff like nothing happened. This means that even on B-class town roads, you can go faster, harder and stay safer on a Pulsar 180.

The Pulsar also returns almost double the fuel economy of the Hornet. The buzzing Honda dishes out 24 kays to the litre of decomposed dino sauce, while the Pulsar easily returns more than twice that!
Which brings us back to the beginning. This was not even supposed to a comparison. And believe me, it isn’t. We’re just two motorcycle lovers having a whale of a time riding two amazing machines and startling some village folk with a fat rear tyre and clouds of dust.

What we did find out is that the Pulsar 180 can match the Hornet experience move for move in all practical aspects of riding in India. And my mother tells me, being practical in today’s day and age is being intelligent.
But there is still one more aspect that really sorts the whole thing out. My friend is planning a Kolkata-Goa ride next month on his red steed. I’d like to join him, but I’m scared to. What if the Hornet breaks down? Nitin smirks at me. And he can, for anyone on the street can fix up his baby and get her up and running. He is already collecting his rations and shopping for his road trip, while I stay busy covering up the Hornet to save it from dust, moisture and scratches. I need to go to Goa too! Anybody got a Pulsar?BSM