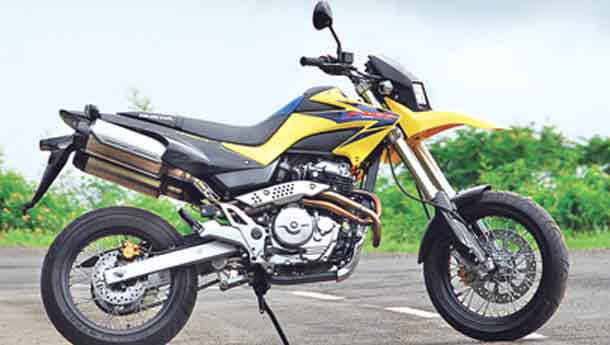 NO,NO, FUNMOTO IS NOT AN OFF-ROADER. BUT IT IS HAPPY

From the word go, Honda made it very, very clear that despite its undoubtedly fitted-to-form looks, the FMX 650 was no supermotard. All and sundry were told that it was strictly a commuter motorcycle, wearing a, er... costume. So, while the FMX comes wearing all the supermotard bits and bobs, it isn’t one. It won’t go up against something more serious like a KTM 690 SM, or even a genuine dirt-bike-to-’motard job like the Yamaha WR450F we’d featured a couple of months ago.

Where the WR450’s motor was very much a dirt bike motor – lots of revs, vibes and instant-on power – the FMX feels lazier, calmer, smoother and just the slightest bit rorty. To compare the two motors, the WR’s engine is like a workaholic accountant on March 31, whereas the FMX is more like a bright college student who decided to take the year off before starting his career. But that should come as no surprise, given the motor’s lineage. The 644cc single cylinder engine is derived from the solid (but stolid) Dominator, which explains the relatively unstressed feel, sub-40 bhp power peak and easy torque flow. This also ensures that long-term reliability will be legendary.

In my mind’s eye, all Hondas are red, so seeing the FMX in yellow (I associate yellow dirt-style bikes with Suzuki) was a bit of a surprise. But a good surprise, because frankly, it looks attractive, built like a proper Honda should be and (the best bit) expensive. While one would expect a middling, single-powered commuter to be a bit dull on the details, the FMX is anything but boring. I loved the surprise on motorcyclist after motorcyclist’s faces when they saw that the stubby silver exhaust cans wore a black endcap that was completely closed. If you don’t look close, you won’t spot the tiny outlets that are hidden neatly away in the tapered part of the end cap. Similarly, the careful and comprehensive heat shields, the subframe that holds both sets of pegs, the USD forks, they all gel together neatly and give the impression of a classy machine.
So much so that when you finally do get on the bike, you wonder where it all went. In true dirtbike style, the instruments are minimal, but in true Honda style, fully functional. Once your hands slot into the grips, fingers resting lightly on the levers, you will notice that your elbows come up automatically, halfway between a Hornet and a CRF250R. And most of  the bike disappears from your vision. The FMX isn’t very wide to begin with (singles are like that), and from the saddle, you see a wide-angle view of the road ahead, just
a hint of the tiny meters and er... that’s about it. With a little imagination, you could even be flying along steedless.

The engine, as I said, is mildly rorty and full of torque. Sort of like a Labrador puppy when it’s time to play. Lob a few revs into the engine and it begins to gambol happily. It isn’t slow, but neither would I describe the progress as superfast. You play with a fair amount of torque, and you can set up a lope that would be great on Indian roads, and have a boatload of fun. Up the ante further and the motor will respond with adequate power to keep you interested, but this single, unlike for instance the fire breather in the CRF450R, was not built for ten-tenths scratching. Taking it easy is what it does best.The engine is designed for effortless power delivery and convenience. The electric starter uses a fully automatic camshaft-integrated decompression system for quick starts and has a single-shaft balancer for reduced vibration.  Among other features, the large volume, dual canister exhaust is all-steel and each exhaust pipe gets its own parallel running header. The chassis is a single backbone job (think Honda Hornet) and the backbone also works as the oil reservoir for the dry sump engine, holding 2.5 litres of oil.

The brakes are great, and since the bike is light, this gets highlighted pretty quickly. The riding position is tall, but once you get used to it, it’s not something you even think about. You can swoop into bends with
nary a care and the light, lithe and slim motorcycle is always willing to change direction as quickly as you want.

After you’ve had some time in the saddle, you begin to realise that Honda wasn’t kidding – you can do a few extra things you wouldn’t normally do with a bigger machine. You can begin a U-turn from the ditch that runs along the road, happily hightail it into someone’s dirt-road and then make a smart U-turn at the end and rush back to the road, suspension contentedly jiggling up to keep the ride smooth. You can commit to a blind turn, knowing that the sorted and easy steering geometry allows you to adjust the line whenever the need arises.

That just about sums the FMX650 up. This is a real world motorcycle, for real world motorcyclists. It thrives in its versatility, it enjoys the non-specialist role, and yes, it does enjoy its flash looks too. Hell, the bush I’m beating about is that the FMX650 is a big softie. It wears the clothes and attitude of a backalley brawler, but at heart, it’s the good boy who helps old ladies across the streets with a smile. BSM

Raju Shaikh is a US-trained mechanic who is equipped to handle any and all big bikes. If you need great service or good diagnostics, you can reach him in Pune at +91-98220-58786