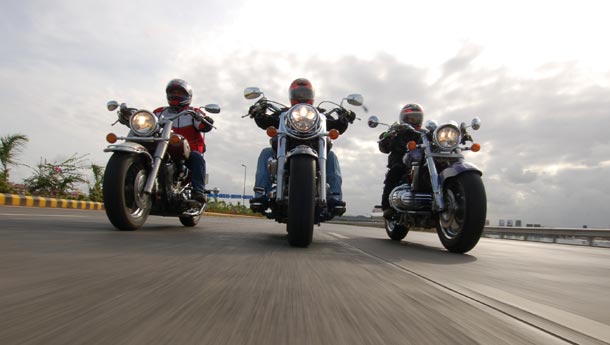 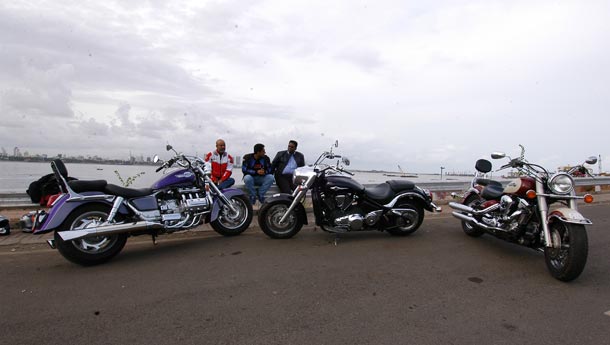 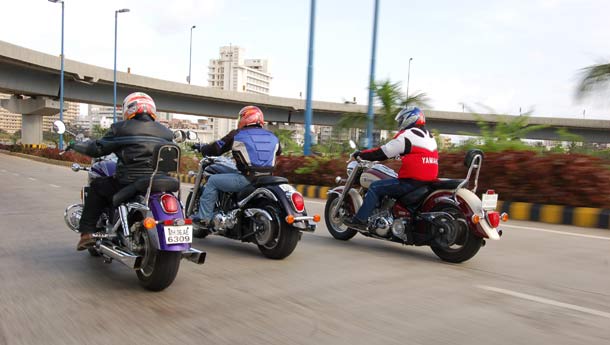 There are days when you’re just not in the mood. You don’t have a headache, but you say you do. You hunch forward on the controls, but don’t whack it wide open. And you smile broadly as usual, but it won’t reach your eyes today. On these days, a high tail sportsbike is too much work. You don’t want the ache in the wrists, the constant feeling that the orifice with the highest altitude on your body (temporarily) isn’t your mouth and you don’t want the disgusted hum of a seriously under-utilised engine.

If I were rich enough to afford a sportsbike, I’d start saving money to buy one of these three as well. From left to right (you’ve met them all before actually) say hello to the Honda F6C Valkyrie, the Kawasaki VN2000 Vulcan and the Yamaha Road Star.

Each of them is or was the largest cruiser in their brand line-up and together, we’re talking almost 250 bhp, nearly 6000cc and 10 cylinders. And about sixty-two acres of painted plastic and metal, if you were to lay them out end to end.

Of the three, the bike we met first was the Yamaha Road Star. It was a hell of a lot newer then, but it hasn’t aged that much. The slightly ivory colour does make it look a bit older, but in the evocative manner of yellowed paper, especially one with a love letter on it. Since then, the Road Star has grown in size and stature, and remains one of Yamaha’s most popular cruiser models. In current form, it makes more torque and power than our 2001 example, has a 70cc larger engine (which also powers the jaw-dropping Warrior) and various minor tweaks. One thing has not changed, though. Like the last time we rode it, the air-cooled pushrod V-twin feels alive. It was never completely isolated from the rider, and you can feel every large explosion in each of the two 800cc combustion chambers.   But you could be forgiven for laughing at the Road Star, should you have just extricated yourself from the VN2000. The big Vulcan is the largest production V-twin on the planet, and its 2053cc are barely controlled. Like a true Kawasaki, it can be docile, but when you jerk the throttle open, it rushes forward so hard that you won’t do it with the same abruptness ever again. At lower revs, she hums unsteadily along, not complaining too much. The massive Kawasaki feels quite easy to handle once under way and at speed, but slow speed manouvering can take a bit of getting used to. And muscle. The wide handlebars give huge leverage, but at least one of my colleagues failed entirely to lift the thing off its sidestand. In a U-turn, you end up either waddling around unsteadily, or you take a deep breath, commit and pray hard. But all of this fades into a perfectly formed laugh every time you open the throttle. The springtide of torque just crashes past every obstacle, tosses your surprise aside like matchwood, and hurls the 309 kg symphony in black with the might of a giant catapult. From the saddle, you can feel the huge 200-section rear tyre hook up, slip and slide now and then and just keep the speedometer needle moving up and up.

Compared to the relatively docile but very tactile Yamaha, the Kawasaki feels like a quiet quarterback, but with a slightly twisted sense of humour.The Valkyrie, you could say, is the perfect foil for both. The one we have here is an early model, sporting the 1502cc motor from the previous generation of Goldwing motors. It makes almost a hundred bhp, but in a silent, slick way. Valkyrie wheelies aren’t unknown, but the Honda is almost devoid of a soundtrack. The horizontally-opposed six-cylinder engine is quieter than an abandoned monastery, and slicker than teflon. Open the throttle and somehow, silently, you find yourself half a kilometre down the road. No noise. No drama. No time lapse.   But that is what they could do. Today, we ride gently. I just about crack the taps open on the Vulcan 2000 and thrum along at a very legal 60 kph. On my right, I can barely hear Zubin on the Valkyrie. He holds station effortlessly, engine barely audible. On my right is Captain, his Road Star making the typical pushrod V-twin noises. Running stock pipes, it’s a quiet, peaceful clutch of cruisers, just moseying on down the road.
At this pace, you have time to take a long look at the other bikes, watch the sky reflected in the their paint. To catch the look of desperate envy in bystanders, whose eyes follow us like sunflowers do the sun. To bank into corners in formation, making drivers behind us forget about speed for the moment, and concentrate on the sheer beauty of three low-n-low, eight-foot-plus motorcycles flying low in formation.

Thank God I can ride like this only once in a while. The Vulcan eventually snaps me out of the mood, and returns me to my usual, more hyperactive self. I raise a hand, ‘Nice flyin’ withcha!’ and whack that throttle open. The Vulcan grabs my throat and throws me forward like a ragdoll. I watch the horizon pass below my front wheel. Both the cruisers become mere specks in the mirrors. Just the way I like them.