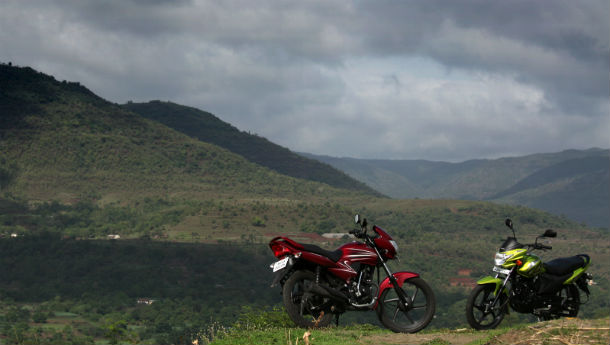 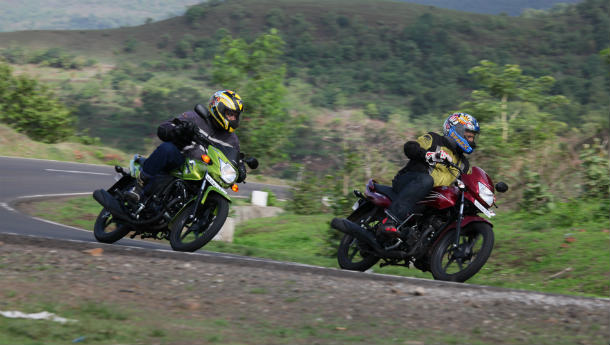 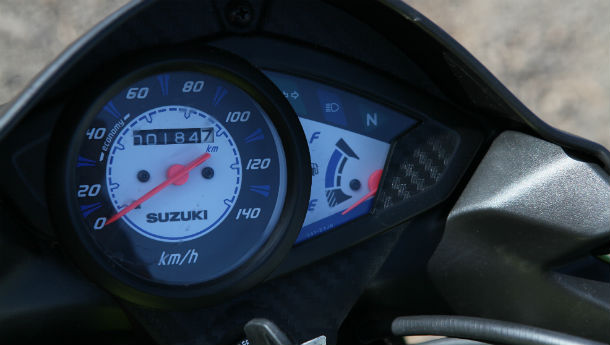 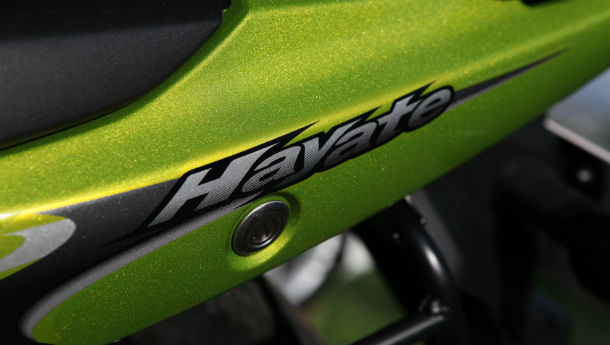 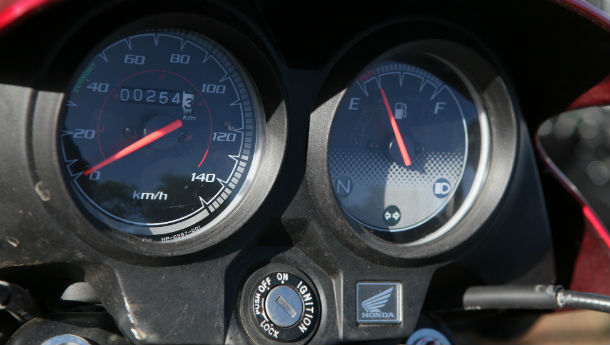 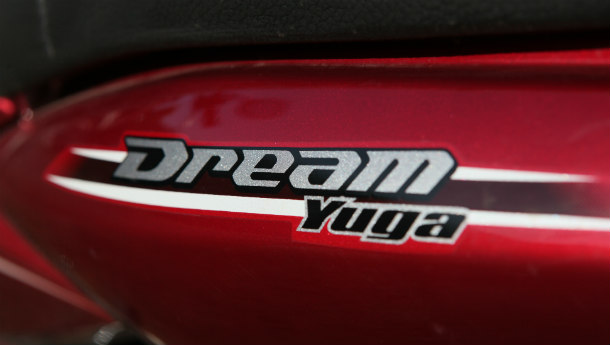 Motorcycle testing these days has trickled down to nit-picking in a lot of cases, I’m afraid. Sure, there’s practically a new motorcycle being launched every other day but the downside is that a lot of these bikes feel like clones. There’s not much difference in the way they ride or the way they sound – the only differentiating aspect seemingly being the badge on the tank and the paint.

This becomes even more acute when you’re about to evaluate two motorcycles from two different manufacturers but belonging to the same segment. Take the newest offerings from Honda and Suzuki, for example – the Dream Yuga and the Hayate respectively. Both these bikes are debuts for their respective manufacturers in the cash-rich pan-Indian 100-110cc motorcycle segment, and their makers are banking heavily on them for obvious reasons.

The Dream Yuga’s spec sheet begins to read with a 109cc motor putting out 8.5 bhp with 0.9 kgm of torque. The Suzuki’s technical numbers start off with the 112.8 cc motor making 8.3 bhp and 0.9 kgm of torque. Those numbers might not differ much but the performance figures say otherwise.

The Honda gets to 20 kph from naught after 2 seconds, then proceeding to get to40 kph after 2.8 more seconds and then attains 60 kph after 9.5 seconds. The Suzuki, on the other hand, hits 20 kph from standstill after 2.2 seconds and then picks up pace to achieve 40 kph in 5.4 seconds, with 60 kph showing on the speedo after 8.3 seconds. After the very scientific process of observing these numbers, it’s easily deduced that the Dream Yuga makes its power earlier than the Hayate, but the Suzuki trounces the Honda at mid revs and beyond.

What number crunching won’t tell you, however, is how these motorcycles feel when they go about doing their business. The Honda seems very refined at low revs, but the motor begins to get vibey when pushed harder. It gets to a point when the vibrations begin to tingle your toes, and that’s when you know the Dream Yuga’s mill is having a little too much fun for its own good. The Suzuki, like most parties worth attending, begins with a very staid hum, but then when your right wrist wrings back the throttle to get the fluids flowing into the motor, the Hayate becomes the heart of the party higher up the rev range.

The problem is that when the Suzuki is pointed towards an incline, the motor begins to run out of steam a tad too soon, needing some serious downshifting to keep the scenery in motion. That, thankfully, is not a problem with the Honda, which can attack comparative inclines in a higher gear.

Speaking of gears, both these bikes have good gearboxes, with slick shifting and what not. However, the Honda gets an all-up shift pattern for its four gears, while the Suzuki makes do with an all-down unit, both of which are extremely annoying and if you’re not careful while downshifting, it’s quite dangerous, because you could very well land up in neutral instead of first. This is hard to digest, especially with the Dream Yuga, since the motor has been borrowed from the Twister, which sports a 1-down, 3-up shift pattern. I realise that this might have been changed to keep Splendor and CD-Dawn riders in mind, but I don’t really see the point in changing a good thing just for the sake of familiarity for some riders.

Another familiarity for Splendor and CD-Dawn riders, and not necessarily a good thing, is the lack of a disc brake on the Dream Yuga and the Hayate, even as optional extras. While both are extremely dead in feel, the stopper on the Honda seems to bite more progressively than that on the Suzuki, making it more reassuring to use. That said, the drum brakes on both bikes fade extremely easily, with an enthusiastic ride through mountain roads making it even more pronounced. Economics come to mind when I wonder why this duo have to make do without a disc brake, something so critical for the market segment the Dream Yuga and Hayate are aimed at, but they ought to at least be on the menu for those who are willing to pay that little extra for better, and thus safer, braking performance.

The Dream Yuga and Hayate are both fairly neutral handlers, with the limiting factor being the tyres rather than the frame design. Of the two, however, the Suzuki feels a tad more top heavy than the Honda, and tends to fall into corners. This could very well be attributed to the taller 165 mm ground clearance (as compared to 161 mm of the Honda) coupled with the shorter 1,260 mm wheelspan in comparison to the 1,285 mm of the Dream Yuga.

When it comes to commuters, riding comfort is of utmost importance, almost at par with frugal fuel consumption I would say, and the Dream Yuga fits a rider of my proportions better than the Hayate. One reason for this is the Honda’s fuel tank, which is shaped with flowing contours as opposed to the aggressively sharp lines that outline the Hayate’s knee recesses in the tank. On the Suzuki, my knees simply wouldn’t fit into the tank recesses, no matter where I placed my feet on the pegs. The Honda’s straightforward raised bars also accept my arms more comfortably than those of the Suzuki, which were tall and then curved inward, causing my hands, and consequently my wrists, to rest at an awkward angle. This setup, however, would fit a more average sized rider better, which seems to be the target demographic anyway.

Now, there are two distinct camps when it comes to whether a motorcycle seat ought to be soft or hard, and I belong to the latter. Keeping that in mind, I preferred the Dream Yuga’s firm seat over the relatively softer Hayate saddle, but as I had mentioned, that’s all about personal preference really.

Styling too, just like the preferences for motorcycle saddles, is subjective. Some might find the conservative mix of curves that make up the Dream Yuga’s aesthetics just the thing that they wanted. Others, like me, would find the Hayate’s mass of slashes, cuts and bulges more appealing and youthful, especially in bright colours like this radioactive green!

Suzukis have always been well-built, right from the days of the Zeus and the like. The Hayate too, has good quality plastics that appear to be of the sort that age well. Below them, however, it’s another story. The welds on the frame of the bike we were handed over for the test were far from pleasing to the eye, appearing to be the work of someone who hadn’t wielded a welding torch for very long. There was splatter everywhere and the welded seams were untidy and haphazard at best. The Dream Yuga, however, also boasts good quality plastics and had better finished welds on the frame. Overall, the Honda seems to be the better built of the two, and that fact alone should ensure a better resale value whenever the rider chooses to upgrade.

Of the two, in my opinion, my bet would be on the Honda Dream Yuga. It’s a better all-rounder than the Hayate and most apt in the city but the ex-showroom, Maharashtra price of Rs 48,028 for the base model as compared to Rs 41,504 for the Suzuki, warrants a rethink especially by those on a very limited budget. Remember what I said about nit-picking?