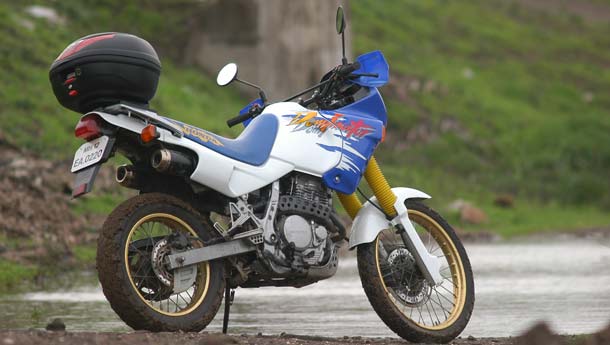 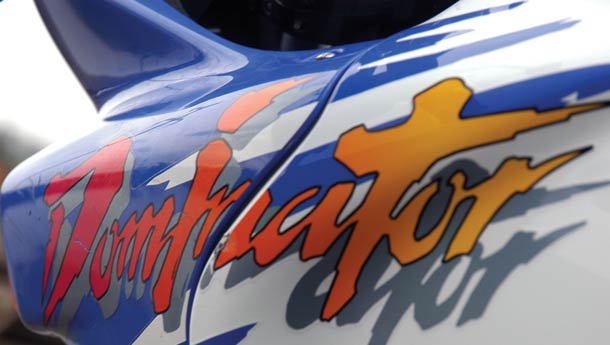 Want to circumnavigate the globe? Well, you could follow Dennis Tito, the first space tourist and borrow a space shuttle and hope there is no cloud cover. Or you could save yourself a few hundred million, get the Dominator and have tons of fun instead.


At BSM, we have made it a bit of a habit to unearth some of the most amazing machines in the country. This time around though, the spec sheet reads like  a meek apology. Lets talk numbers. Power? 43 bhp. Pah! Cylinders? Well, its got one of those. Then there is the top speed, which at just about 170 kph is measly. However, there is a point to this thing. But first let me tell you how this Domi came into being.

You see, back in the late 80’s and early 90’s, there was a brief fascination for big road-going trailies in single and twin forms. Quite expectedly, every Japanese maker worth their salt built one. So, there was the XT600 single and XTZ750 twin from Yamaha, the KLR 650 single and KLE500 twin from Kawasaki and the DR range from Suzuki. Honda, for their part, had this – the NX650, or what they called the Dominator.  The motor came from their then retro bike, the XBR500, and while it retained the 4 valve head, Honda stretched the 500 to 650cc. Then they shoved it into an off-road frame and gave it the high seat, high bar, big wheel, scrambler exhaust combo. A two inch fairing and a bash plate gave it its road going pretensions. Styling was, for the time at least, supersharp.

But then, you need to realise that not every motorcycle is a boy racer’s dream on wheels. And that’s when you start to see the point of this thing. In the adolescent world of nought to sixty runs and quarter-mile times, the Domi seems to be cut out for the real challenges of adulthood. Like crossing deserts, wading into rivers and traversing equatorial rain forests.

While on most bikes the dark mood of the sky tells you ‘The party is over, chum’, on the Dominator the party has just begun. And then it’s up to you to play Alexander or Genghis Khan – conquer continents, traverse tundra or be a jungle juggernaught.   The specs aren’t too tall, but once settled in the fairly high saddle of the Honda, the paltry 44 bhp feels just right. In fact it’s just about perfect to get you started off on dirty habits. Not to mention the attitude it has, which prompted this tester to try things out of his skill range.

In town, the power is enough to accelerate briskly through traffic. The motor is a peach of a single – there is a pleasing burble at idle and it happily revs till the 7200 rpm redline without shaking out your fillings. That’s not much of a redline, but the torque is well spread and provides enough of a working rev range. In fact, it’s so good that there is a choice of three gears in the five speed gearbox to pull you out of trouble, most of
the time.

Despite the high saddle, the fact that it’s a single and hence so light means that manoeuvrability is never an issue. So you can take the bike into ankle deep mud, get stuck and then paddle your way through. Which is exactly what I did. That should explain the muck smothered rear tyre then.

Around town, the tight turning circle is great to cut through traffic. The steering is fairly quick and the complete package is adequate enough to have fun in the twisties. But as you approach full tilt, the front doesn’t get along too well with the rear and that’s when it starts feeling vague. As for the brakes, the front disc is a bit weedy but useable enough.

As I said before, a motorcycle like this isn’t really meant to go around corners. At least not at an angle. Its job is to give your frequent flier miles a complex. To take you to places which you thought were unreachable and beyond. To ride all day long into the sunset – a desert sunset. And after you arrive at the most forbidding wilderness’ on the planet, you take out your tent from the hold-all and pitch it next to a lake. And as the sun goes down, and you sit around a bonfire, the mud splattered Domi would be a perfect reflection of the journey, which was perhaps the destination. Now, there are better bikes to ride the world on, and more logical ones as well. But then again, the Dominator is significant because it virtually created the urban trailie class single handedly.

So then how come it’s never gotten around to becoming a legend? Well, firstly it was never the kind of motorcycle that was bought by the average Joe. The Domi was always bought by people who lived life in the ‘prepared to-leave-everything and head out’ scale. And so while the CBRs and the ‘Blades always made it to the headlines everytime Honda changed a clutch spring on them, the Domi continued to appeal to the guys who couldn’t care less about the Blade upgrades. It served them well and they never asked for anything more from it. That’s also why the Domi has remained virtually unchanged since inception. Hard to believe, but true.

But later, BMW built the GS, a motorcycle that did a better job of doing all things well. Then they upgraded it, and then upgraded it again, and kept on doing so until it became the best selling motorcycle in the world. Lesson to be learnt? Maybe. But that’s another story for another day. Meanwhile, Big Red is busy building crotch rockets on foreign soil and eco-weenies on ours. Oh, and as for my riding around the world plan – well, there are two kinds of people in this world. One kind actually gets up and does something, and the other makes a great audience. I belong to the second group.

For more info on the Dominator, speak to Raju Sheikh at 098220 58768. Raju has graduated from the famed Motorcycle Mechanics Institute (MMI) and should be able to help you out with any motorcycle you have.