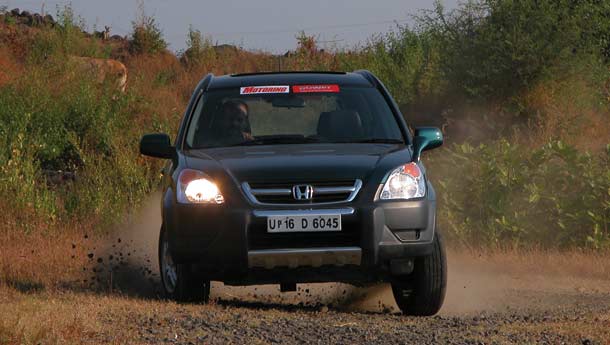 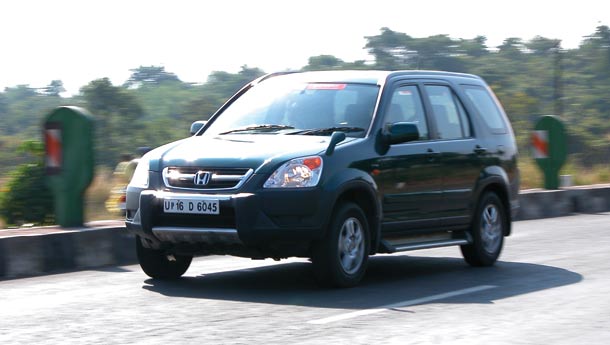 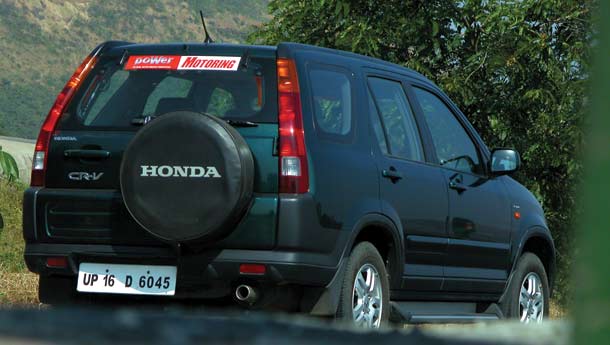 I never thought such a fate awaited me when I boarded the mother ship. Actually, I was happy to be born a Honda CR-V – man,you should have seen the way they created me. Every bit of me was meticulously assembled, my body treated to umpteen coats, my engine thoroughly tested and mostimportantly, my brain tested for everything short of AI. Even I was impressed seeing my own reflection in the glass-lined inspection room at the end of the assembly line. The metallic green paint was not my choice and I envied my other CR-V mates in solid whites and some shades of red. But I did like my slightly inset clear lens eyes. My clothes fitted me well and I thought I managed to look healthy, yet not overweight – yes, I do have a bit of a flab around me, but the guy who gave me a final polish job seemed to love it in my curves. Then a strange thing happened. He pulled out a sticker and that read India! What? I thought, and more so since I was a right hand drive model, that I would be sold to some caring hand in the domestic Japanese market and instead, my destiny was to serve a lifetime in India!

I was given protective covers and driven up to this ship, along with thousands of my kind – those bound for USA were obviously happy and some bound for the African continent not so. I had mixed emotions running through my ECU – maybe I will find a caring owner in India who would pamper me a lot and take me out only for city outings. After landing in Mumbai, I was sent in a dark and murky truck to Noida where I saw my Indian-born cousins, the City and Accord – some of them cribbed to me about how bad roads can get in this country and I could see them getting jealous seeing my ground clearance. Then it was another long journey to ARAI where I was thrashed left, right and centre around a terrible track. Some of the engineers looked perplexed at my build quality and at the fact that their equipment was not qualified to handle my memory. Despite the terrible treatment, I won the day for Honda India when I passed the homologation tests with flying colours –now, maybe they will retire me from road duty and assign me to the company foyer; after all, I was the first CR-V in India, right? No such luck. Back at Noida they cleaned me up and sent me for a formal launch of the CR-V model in the country. I loved all the attention, you see; after all who doesn’t like to be photographed? But my fame lasted only a bit longer than the proverbial fifteen minutes.

The next day I was handed over to a magazine team. Don’t know whether they thought I was a crude Hummer or what, but they put me through some tests, the details of which I cannot publish in a family magazine. Tell me, how can they compare me with a V6 powered Suzuki Vitara? But I did fare well, it seems, and I did show my hatch to the Subaru Forester which someone has wrongly badged ‘Chevrolet’ in this country. I won that group test, to sum things up. The next lot was equally exuberant and despite my brilliant showing on and off the road, they managed to crash me. I was all scarred and mind you, being a CBU import meant that even Honda India took their own sweet time for spares and panels to be flown in. Hope none of my CR-V friends go through the fate of being stuck in a service station for a month for want of parts. The day I was released after extensive plastic surgery, I was let out to, you guessed it right, another bunch of motoring hacks. I only hope they treat me well this time out.   Actually, the guy who picked me up from the service station scared me. He was built like a bull and kicked my 205/70 R15 Bridgestone Duelers as if they were footballs. Once settled behind my four-spoke wheel, he started searching for my hand brake lever. After some searching he discovered the lever, which is cleverly disguised to look like a grab handle. He was certainly not happy to see my automatic gear lever (column mounted, you see) though. He fiddled with the tiny auto-box selector and chose D for drive. I could hear him swearing at those who invented automatic transmission as we pulled out. On the open road he began to enjoy what my i-VTEC engine had to offer. I amused him by cruising at 100 kph, with the tacho needle hovering around 2200 rpm and I could see his teeth every time the needle arced between 4000 and 6000 rpm. He soon realised that all my power rested in that meaty band and then there was no stopping him. Needless to say, we reached his home quickly. Later in the night he took me out again, but with his wife for company – you won’t believe how civilised he was this time out; I never exceeded 120 kph. I cruised happily and I could see the faces lit up from the dashboard instrumentation and could tell that they were enjoying every minute of it too.

These journos seem to have some fun, because the next day another big guy was busy kicking my tyres. I had seen him at the press launch at Delhi and he seemed to be quite familiar with my controls. He was in ‘get-home’ mode that day but I heard him talking over the phone about some tests the next day. Oh, not again! The next day started with the big journo, another one wearing red shoes and a photographer driving me into the peripheries of a national reserve forest – the road was terrible but I didn’t let the guys know it, thanks to my hardworking struts up front and wishbones behind. Then the trio took a particular liking to a corner – a dirt road that suddenly decided to turn right – and you won’t believe it, the big guy drove me around it for a minimum of fifteen times. To begin with, he was slow and I went around without much trouble, but as the speeds reached 80-100 kph, things did start to go wrong. You see, I come endowed with a all-wheel drive system that sends torque to the wheels that require most. While it all works in rain, mild-snow and little bit of slush, this system is not really meant to challenge Audi Quattros and my WRC friends from Mitsubishi. The problem was the big guy was pushing me around that corner, gravel flying and all. Once, the rear left Bridgestone gave way after coming through the corner and the big guy corrected by opposite lock, bringing me back to line. The next time, he carried some 90 kph into that corner and bingo, I managed a full 180-degree before our man could react. He seemed to be happy that he had made me do that shameful dance. And I really prayed for some tarmac to show my real strengths.

And tarmac it was next! The smooth bit of four-lane road was brilliant and I started off by impressing the big guy and red shoes with a 60 kph run in 5.4 seconds flat. My automatic ratios are suited for spirited acceleration since I can stretch the first gear all the way to 70 kph. But the next run was not that good. Even with the big guy pinning the accelerator down, I took all of 12.1 seconds to touch 100 kph, no thanks to my i-VTEC motor which has a tendency to drop revs between shifts – not good when it is mated to an automatic transmission, you see. My genuine prowess came in the passing speeds tests – just 8.8 seconds for an 80-120 kph run and only 13.2 seconds between 100 and 140 kph. That is where i-VTEC optimises revs for some creamy delivery of useable horsepower – good enough to pass slow-moving traffic. I don’t know how fast these guys must be flogging ‘proper’ cars around test tracks but they had the guts to take me, an SUV, around a fast sweeper at 140 kph. Enough to get red shoes talking about almost ‘nil’ body roll. Despite ABS assistance, I faltered a bit in the 0-100-0 test as there was mild lockup and my rear set of wheels moved out of line ever so slightly – but I could see that the big guy was not very happy at the outset. ‘Modern cars are not supposed to do that,’ he said and demanded an entry in the log book. Big deal.   Top speed runs were easy, as I showed them the bright side of 170 kph. Things would have been better if my rev-limiter had not interrupted the proceedings. The trio was getting tired as the November sun was now burning 33 degrees bright (I display ambient temperature on my digital display, you know). Soon, testing speeds came down and the air-con was pressed into service. The photographer shook his head at my push-pull-turn knobs, but all of them were happy with the way my air-con worked. Red shoes was busy calculating fuel consumption figures – he came up with a figure of 10 kpl. Now if these guys had not run that wretched corner fifteen times and all those acceleration runs, I would have returned 11 kpl at least.

Soon the conversation inside the car was about my competitors. They were convinced that I was very good for on-road, in-city and inter-city duty. And none would take me out to the Thar desert or the Raid de Himalaya – as if I want to go... What I detest the most is how much they are in love with that wrongly badged Forester – and I really think I look better than that squat… okay, forget it. Big man came up with the verdict as we turned into his office premises. ‘ I would take this over an Accord, even though I prefer a car’ – some consolation. I also heard I am a hot contender for the ‘ Import Car of the Year 2004’ award and more so since I cost only Rs 14-15 lakh.

Hope I win it. They will get me all cleaned up and take me to the awards ceremony. And of course, I will get photographed again. That will be something to write home about.

I must admit I’m a die-hard Vitara fan. That exuberant, ripping V6-powered car is certainly the wild-child of SUVs sold in India. For me, no other SUV came close to the ‘Zook. Until I drove the CR-V, that is. Undeniably, the Honda has moved the game ahead. The Vitara still is, by far, the most entertaining in a straight line, but in every other aspect, the CR-V has it beat. Unless you consider the rather pointless rear-view mirror mounted on the hood (so very 1990s), there simply aren’t any offensive bits on the Honda. Inside, it’s pure luxury – spates of space, leather everything, and smooth 4-speed automatic – it’s all been made so painless, even peak office-hours traffic jams almost aren’t a hassle. The CR-V isn’t really a traditional SUV – there’s very little off-road capability, you can’t manually shift to 4WD, and there’s no low-ratio. Think of it as a high-riding luxury estate which you can take off-roading once in a while, but nothing too severe please. If the Vitara is the Marlboro-smoking, jeans-clad cowboy of the bunch, the CR-V only wears Gap, has black shades on all the time, and smells of Ferragamo. It does make sense really – you can’t go wrong with this one.