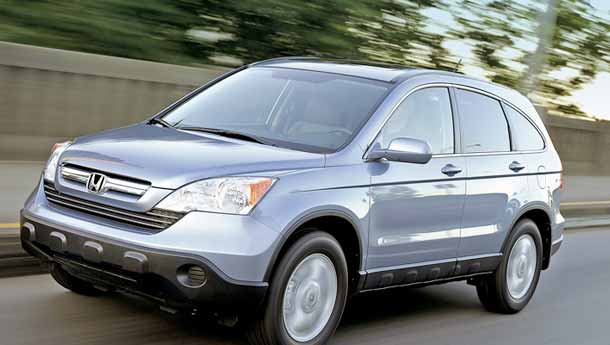 Our long term CR-V goes for the ultimate mountain challenge. And wins!

When the designers of the Honda CR-V were given the brief to create a Toyota RAV4-challenging soft-roader SUV for city slickers, they wouldn’t have had images of the Himalayas in their mind. Surely they didn’t expect a journalist to take it through three of the highest mountain passes in the world in a single day. They would have got the jitters if they knew that the said journalist was attempting the drive of a lifetime just after the rain gods had ruined the tarmac – or whatever was left of it.

I had been planning a holiday in Leh with my wife and I couldn’t get return flight tickets. Our long-term CR-V had gone back to Delhi to serve as transport for a visiting Honda delegation, and I made sure that it stayed there so that I could start my drive from Delhi.

11/12 August 2006
We picked up our car from Delhi airport and started driving straight away, in the middle of the night. I was a bit exhausted and was running a slight fever –my wife grabbed the keys to the CR-V and when I woke up, we had passed Chandigarh. Fantastic. The drive up to Manali was eventful only because we decided to take a back road to Mandi – scenic, but it took a while to reach. The CR-V gobbled up tarmac effortlessly – maybe it wouldn’t have, if it knew what lay ahead. The evening was spent sampling the brilliant trout at Johnson’s Cafe. Before the trip, people were apprehensive about our plan,more so with the heavy rains that ruined the Manali-Leh road. But we yearned to get out of civilisation like never before and we were not going to look back now.

13 August 2006
Easy drive up to Rohtang, with the bright sun on our side. We stopped for a hot bowl of Maggi once we crossed over the first mountain pass. The roads bore the brunt of the rain but nothing that the CR-V couldn’t handle. Filled the car to the gills at the Tandi fuel station – the last one on the way to Leh. Gave a ride to three women returning from a funeral at the back of beyond to Keylong. And in another 30 km we saw the green roof of Hotel Jispa, our stop for the night. Jispa was cold but it was important that we got acclimatised to the low oxygen levels. The good old Hotel Ibex served a splendid meal.

14 August 2006
The road leading to Baralach-la was tarmac almost to the summit and the CR-V was not missing a beat. It was special because it was my wife’s first serious mountain pass and she loved every second of it. She was so excited that we didn’t stop for the obligatory photo next to the ubiquitous yellow marker!

Things started going bad from then on. The Sarchu plains were beautiful but my wife was showing the first signs of altitude sickness and my head started throbbing too. At Nakee-la, we caught up with three bikers and chatted for a while. Lunch at Pang was made up of more Maggi noodles – not a good idea when low oxygen levels are strangling your internals. The CR-V almost got bogged down in the massive More plains – too much rain water that had no place to go. All-wheel drive and a bit of help from fellow travellers who were following our tread marks in an Innova helped. The road was nowhere to be seen as we blasted across the plains in the general direction of Leh! Tanglang-la, the last frontier before Ladakh, was at its worst. The road was broken and there were snow flakes on our windscreen. The wife had almost passed out on the passenger seat – I kept talking to her so that I kept my brain working. On the other side, the devastation caused by the heavy rain was very visible. The mighty Indus had charted a new route and it had swallowed the road for a good part of the previous week. With the mountain passes behind us and more oxygen in our lungs and going into the CR-Vs combustion chamber, the mood in the car got better. A hotel room, a hot chai and a clean bed is all we wanted. That we managed to get at Hotel Mongol at Leh. Sleep was not a process but a state of mind.

15 August 2006
We woke up fresh and ready for action – the advantage of driving up to Leh versus flying in is just that. The entire town had gone to see the Independence Day parade at the school ground and that meant we had the whole town to ourselves. A bit of shopping and a visit to the Leh Palace was in order. Some hot momos for lunch. After a short rest we moved to a new hotel with a stunning view. A thorough service was our reward to the CR-V, and she was shining in the evening sun as we drove up to Shanti Stupa.

The clouds were closer to us than ever before and there were no stars in the sky. But we were at
Leh and loved the fact. A beautiful dinner by a campfire was not necessary but just added to
the charm.

16 August 2006
Time for the Gompa run. After a splendid breakfast at the German Bakery, we traced our way back to ever beautiful Hemis before it closed for visitors, and then crossed a narrow and delicate hanging bridge with a raging Indus beneath us to reach Stakna. The return run saw us marvel at the massive Buddha at the Thiksey monastery and then park and climb nothing less than the 100-odd steps to the Shey palace.

17 August 2006
An early morning start saw us storm through arguably the best driving road anywhere in the world towards Kargil. We took detours to visit even more Gompas though. Alchi, by the Indus again, is a stunning place to be at and we had to literally haul ourselves back into the car. A brief encounter with a massive army truck on our way up to the Lamayuru monastery meant a scarred CR-V – well, the truck driver was young and he couldn’t stop on time. Well, it could have been bad, we told ourselves, thanked the Gods and continued. And yes, we had a guest in the car in the form of Charon, all the way from Israel and the talk in the car centred around wars. You will talk war if you are driving up to Kargil, right? Hotel Zojila is not the Marriott but it had clean beds and hot water – and yes, they served chilled beer and a nice ‘meat curry’. Fantastic.

18 August 2006
The CR-V was now gunning across a road lined by army activity. We passed Drass, the second coldest inhabited place in the world, saw the infamous Tiger Hill and tracked our way to Zojila itself. After all those mountain passes on the Manali-Leh road, Zojila can be called a brief affair. Soon the magnificent Kashmir valley opened up in front of us. We didn’t know whether to be happy or sad – the trip was coming to an end, you see. We had a plane to catch and that meant no staying in the beautiful yet Army-packed Srinagar. The CR-V belted across the valley and through the Jawahar Tunnel. We were back in civilisation, and trucks and people and dhabas...

The CR-V file
The car ran perfectly through the trip. We were apprehensive about its off-road ability (what with no provision for a low-ratio) and its ground clearance. But I can’t remember a single instance when we heard the underpinnings hit anything substantial and bad. In a way this trip was an eye-opener of sorts for someone who has been calling it a soft-roader from day one! And the way the car ran on the highway after such a massive mountain jaunt is what was surprising – there were no squeaks coming from anywhere and the engine was feeling better than ever before. Talk about build quality.

Negatives? Well, it drinks petrol, if you insist.
Covered : 7,500 km (2,500 km just from this trip)
Fuel efficiency : 12 kpl on highways and a splendid 8-10 kpl on the mountains. We never used the additional fuel we carried in a container from Manali!
Problems encountered: A rogue Army Stallion left its mark on it. But nothing more than that.