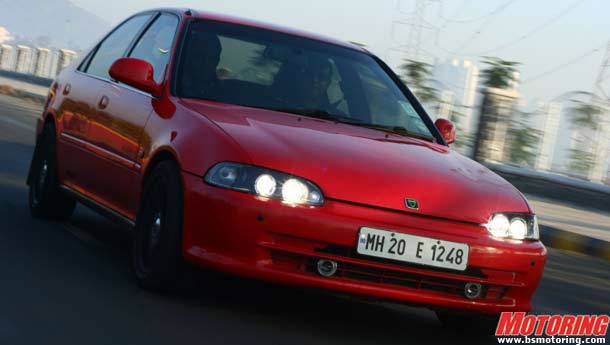 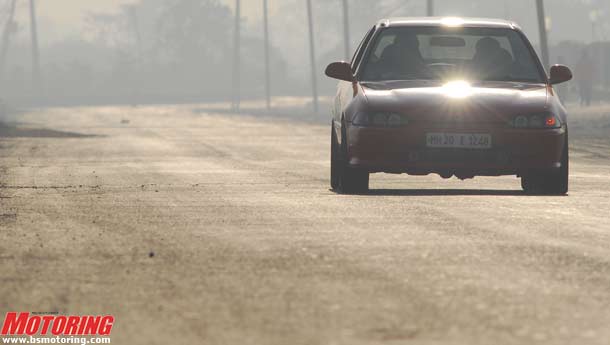 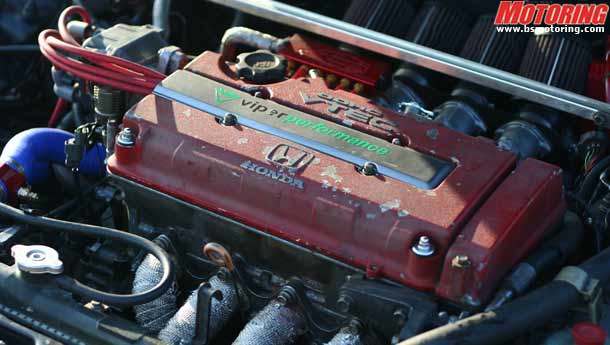 "I may be mildly exaggerating, but at full chat, this sounds like an F1 car!" It sounded glorious no doubt, but F1 V10 audio was a bit far fetched. Still, I was strapped in the passenger seat, the speedo dangling in that dead space between 180 and 0 kph and a relentless Jignesh stomping the throttle for all its worth. I humoured him.

When Rohin first mentioned the words 'souped-up Civic', I fell asleep. So did Kyle and so did all of <I>BSM<I>. I mean, aren’t they all over the place anyway? Fortunately, Rohin had a picture on hand and that changed the setting a bit. Kyle was still asleep, but then he'd be so even if we went running up and down the office screaming 'Tornado!', not the Hyundai, mind you.

Okay, so what we have here is a '94 Honda Civic EG8 Integra Type R. At first, the car appears to be one of the many Hondas and Toyotas that trickled into India under various pretexts. But, obviously, there’s more to this car.

This little red monstrosity started life as a yellow number. In its original state of tune, the Civic read ‘178 bhp’ on the dyno. Once Jignesh got his hands on the car, he sprayed it red. Oh, and the specification list now reads in excess of one thousand words.

Jignesh aims for a 250 bhp figure and believes it's already nearly there, but we'll wait for dyno figures anyway. On paper, '1.8 litre, inline four, 250 bhp' doesn't sound like a lot, considering the current gen Accord V6 produces 270 or so horses. But when you're sitting across 10,000 rpm at the breakfast table, you know you're talking business. Actually, the car’s running a stock clutch (which will have been changed, along with a map switchable ECU by the time you’re reading this), so the car was ‘restricted’ to 9000 rpm. In application, at 9000 rpm you are fighting a cold battle with the steering wheel, inflicting domestic violence on your eardrums and preparing a mental goodbye speech for your loved ones.

Aneesh Shivanekar has the biggest computer in the world. It's the new Windows 7 thing with a screen the size of Gulliver's feet. Generally, entire books can be read without having to scroll down even once. So when we asked Jignesh to send across a list of all the go-faster/slower bits on the car, we were a bit flummoxed at the endlessness of that email.

Eagle Light Weight Knife Edge Crankshaft is alien terminology to me or most of the <I>BSM<I> gang, but when needles on the speedo and tacho behave as if on a trampoline, it all starts making sense. To give you a quick run through, this Civic is kitted with RC 440CC injectors, an aeromotive fuel pressure regulator, OBX 48MM individual throttle bodies, (i'll be right back - lunch time) an MSD SS Blaster coil, MSD 8.5 mm plug wires, a Quaife limited slip differential (yes!), okay, good night, Skunk2 Tuner Series stage 2 cams, Wiseco forged high compression piston set and a Japanese to English handbook on swear words. And that's not even a quarter of the inventory sheet.

Also on that list are a D2 Racing rear camber adjuster and front camber kit, race-spec suspension (lowered, et al) in the offing and 205/70/R15 tyres, obviously, to ferry their distant cousins under the hood as per their demands. Smoking allowed only after 5500 hours, er, rpm.

This car is, however, not just a howling mad menace. It's every bit a useable, everyday car. Four doors, seating for five, 12 kpl under sober driving conditions and suspension (street-spec at the time of the shoot) that is on par with today's hatchbacks. To keep the kids happy, you have power windows and, er, that's it. Oh, and there's a million megawatt audio unit in there. Jignesh obviously doesn't buy into the weight reduction theory.

But heck, if you're the careless sort of parent who doesn't mind his seven-year old boy bringing home a girlfriend, you're going to love doing the school run. Your child will look forward to going to school every morning. Proper education, whichever way you look at it. He'll grow up to be rich, with a flair for cars. And then you can finally treat yourself to a Koenigsegg.

Special thanks to Viper Performance and Jignesh Goradia for the tricked out Honda Civic. You can contact them at www.viperperformanceindia.com