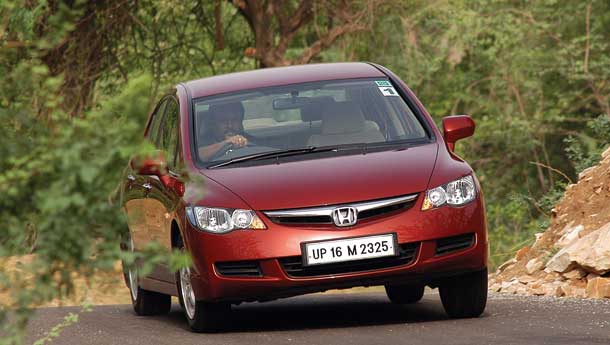 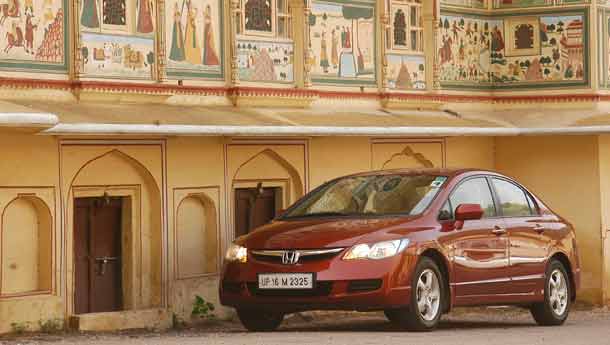 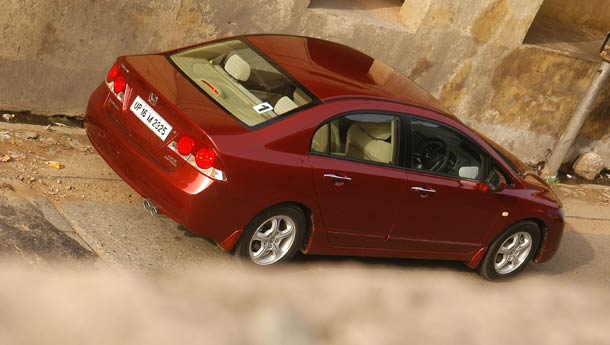 They are not asking us to drive from Delhi to Jaipur, are they? It was Pablo responding to my request to accompany me to the new Honda Civic test drive. ‘Sure they are,’ I told him with certain authority – fully aware of the fact that it will excite him the same way as a ‘Hi, we have some dal-chaval for dinner’ line would. Now, to excite someone like BSM’s travel pro, Honda would have had to include some unpronounceable names from some brand new states, but then that would have taken the focus away from the car, right? The new Civic, according to Honda, is quite a treat in itself and requires a decent stretch of highway to show its true colours. After all, cars like the Civic will be used by their  prospective owners mostly for inter-city duty in any case.

So Delhi-Jaipur and back it was. And before we knew it, I was driving the wheels off a Habanero Red Honda Civic with Pablo still wearing a disapproving look carefully maintained for Honda officials. Nothing an ethnic dinner can’t cure, I thought, and decided to concentrate on the car, which incidentally was already winning my heart.

You see, there is only so much that one can get excited about a four-door sedan – admit it, it is not something you should start drooling all over. These are cars people (reasonably successful ones) use on a daily basis to commute or shuttle between towns. And yes, once or twice they will take it to a hill station or a beach with their entire family and the neighbours in tow. As far as ‘fitness for purpose’ goes, the car has to seat five people comfortably, should have adequate power, and should consume the unleaded stuff in reasonable quantities, right? And yes, it has to look different, and here, dear reader, starts the new Civic story.

The middle of things
If you have seen the Accord and the City, you have already read the final and first chapter of Honda’s new design manual. And the Civic is the juicy middle of things where the plot thickens and all the action begins to unfold. As we all know, modern automobile design is dictated by legal norms for dimensions and safety, but someone at Honda decided to adhere to the above without neglecting style. The new Civic sports the
cab-forward architecture that makes you wonder how they managed to hide an engine under its bonnet – it is sleek and slippery all the way from the front bumper to the rear. And the way the car is built is a tribute to the finest from Seiko and Citizen. Shutlines won’t let a penny in and overall fit and finish is good enough to leave one Mr JD Power contemplating new career moves.

The corporate grille is very much there with a proud Honda badge in chrome. The influence of Chris Bangle on modern cars (heck, Toyota and Mercedes paid homage to him with the boot design of the Camry and new S-Class) is evident the way the headlamps go sagging. Lessons learnt from scores of slammed Civics from the US have gone into the way the mini chin spoiler and the skirts are incorporated into the overall design. A clearly defined waistline with sporty mirrors that sprout from doors complete the package. While the very bling five-spoke alloys are a neat touch, Honda could have avoided chrome on door handles for sure.   The future is blue
Seriously, this Civic interior is meant for a hybrid rather than any car that burns fossil fuel all the time for a living. Everything – the lonely tacho, digital speedo and even the PlayStation steering wheel – echoes the sentiment (Honda calls the multiplex system dash, ahem, the ‘aviator’ cockpit). But the step-up in quality of materials in comparison to the City is more evident than the slight de-tuning required to keep Accord the flagship. Where Honda really scores though is in the ergonomics department – each and every control falls and feels right. Brilliant. While the driver and front passenger seats are perfectly tailored, Honda has forgotten that in India the owner of the Civic will be mostly enjoying the rear bench. If they had thought of this, they would have given a wraparound feel to the back rest and added more thigh support. What is ample though is legroom which aspiring Corolla buyers will need to check out before they firm up their decision. And yes, the rear apassengers get their own controls for the music system.

Techno blitz
Pablo woke up some time back, mumbled something about taking pics and leaned out of the window – rather dangerously. You see, photographers have stunning timing when it comes to killing driving enjoyment. Here I am, just about getting familiar with the latest from Honda and trying to wriggle out of what has been a rather boring convoy. Pics taken, and Pablo re-settled on the seat, it was time exercise my calf muscles a bit. Honda is holding back their superb diesel motor for the Civic in India since they are pretty much sure that they won’t be able to meet the demand for the petrol one to begin with. So what we have here is a 1799cc four-cylinder i-VTEC engine good enough for 132 bhp at 6300 rpm and 17.5 kgm of torque at 4300 rpm. In true VTEC fashion, the car wakes up above the 3000 rpm mark and the familiar induction gnarl fills up the cabin. And then the trucks in the horizon become a passing blur on the side in a matter of seconds.

And in my case, zero to the first expletive from Pablo took 4.6 seconds flat (60 kph) and the seriously bad Anglo-Hindi one (100 kph) took 11.7 seconds. It takes a while before you notice the alarming rate at which the speedo display changes digits – I think I still like the idea of a needle telling me my progress. Before the nice people from Honda could react, I had broken all possible laws of the land. Several times over. Still, the perception of driving a car with what promised to be a hairy engine is missing – I could have done with that extra 10 bhp that you’ll find in the Thai Civic.

Honda is offering the Civic in India with either a slick five-speed manual transmission or a state-of-the-art five-speed automatic with paddle-shift manual override. How much ever I would like to recommend the automatic to you, I have to say that it takes the edge off the fun provided by the i-VTEC engine. Let us put it this way – a well driven manual will be quicker and more fuel efficient than the automatic and it will be much more fun. But choose the brilliant auto-box if you are going to be stuck in traffic jams – which is bound to be the case in most of our towns. The ‘paddle-shift’ may have some novelty value initially, but I am sure it will wear off soon and you will be driving the car in ‘D’ mode – maybe it would have helped if Honda had crafted the paddles with real chrome rather than  plastic.That said, once you get used to slotting the auto selector into S mode and start playing Jenson Button with those paddles, it will be difficult to accept anything less like a simple five-speed auto-box.   As for the engine, I dare say, it is the best four-cylinder motor available in India today. Period. Though the manual transmission makes the car peppy and fun-to-drive, you know the car is built around that brilliant engine. I compared notes with fellow journalists who confirmed my belief that the manual test car was returning close to 13 kpl on the highway – not bad after that expletive inducing test run, you see.

Cornering glory
The new Civic platform is very important for Honda since it will also be the basis point for future cars like the new CR-V, and no effort was spared in the underpinnings department. Thanks to water-logging in the route that Honda laid out from Delhi to Jaipur, we had to take a 50 to 60 km detour via Pataudi. Which gave us the opportunity to sample the City over well-surfaced back-roads, however peppered with speed breakers. Struts up front and a well laid-out (sportscar-like) double wishbone setup at the rear mean the Civic rides way better than its predecessor. It comes through as a very mature car, with NVH levels very well taken care of by Honda. The Indian Civic comes with 15" rubber instead of the 16-inchers seen on the South East Asian versions, which would have actually improved ride quality.

The steering, though it lacks feel, is quick to respond to inputs and you do have a very lively car in your hands. Honda has given the full complement of safety features for the Civic with standard ABS and EBD (electronic brake-force distribution). Both driver and passenger airbags are also standard. The chassis benefits from what Honda calls G-CON (G-Force Control Technology) which has resulted in a superior impact absorbing structure.

Verdict
The Honda Civic is a thoroughly modern car and you don’t need to drive it from Delhi to Jaipur to say that. Suddenly, its immediate competition, like the Toyota Corolla and the Skoda Octavia, feel heavier and less sportier. We always knew Honda could make good engines and the new Civic is proof that they can package it in a beautiful car that rides and handles well too. A detailed road test and a comparison test are due, but that does not prevent us from recommending a buy. Pablo may not approve, but the Delhi-Jaipur-Delhi drive was proof enough.