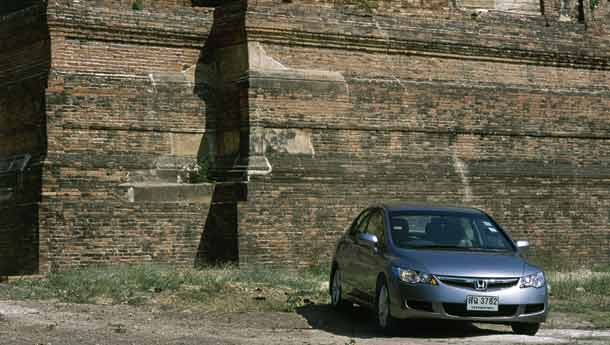 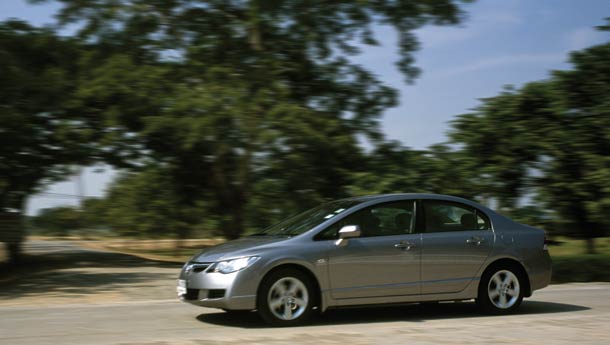 It was a Sunday, so there wasn’t much activity at Honda’s office in Bangkok. I went in search of the new Civic in their parking lot, but I needn’t have done; it immediately stood out among all the cars in the lot. It sat quietly in a corner, but there was a feline quality to it that struck me – like a muscular cat, purring and friendly at first, but ready to give you a swipe at the slightest provocation. It was obvious that Honda had decided to stir things up on the design front – which was appropriate, since the car before me was all-new from the ground up. Honda calls the new shape ‘monoform’, and it’s easy to see why; the way the car flows smoothly from front to back is almost liquid. The words ‘wind tunnel’ must have figured quite a lot in the conversations of Honda engineers, because the car had a striking aerodynamic profile. The wheel arches were nicely filled out by 205 section tyres on 16-inch alloys, but it’s unlikely that either will make it to India – 195/15 is what we’re looking at. The car in the pictures is the American version of the Civic (the one that’s coming here as well), but with larger, curvier headlamps (and a sexy kink just above them in the fender) as opposed to the flatter ones found on the US-spec model. The Civic may be a family saloon, but it’s more R-rated than PG-13. Remember, this is a car that even Honda has described as having a somewhat dull and middle-aged image (yes, it’s there in their international press material), so the sleek, sculpted vehicle that I was confronted with came as an unexpected surprise. On looks alone, this car appears set to be a winner.

Let me make a quick admission here – I’ve had a bone to pick with Honda for a while. Specifically, ever since they went and discontinued the old City, I’ve been a bit miffed with them. I thought Honda had sold out a bit with the new City, which lacked the raw edge and understated aggression of its ancestor, and I didn’t like it. Thankfully, I can’t say the same about this car.

Enough with the side act, then. What you really want to know is how the Civic feels to drive, so let’s jump right in. There’s an all-new 1800cc, 140 bhp i-VTEC engine under that arresting V-shaped bonnet, and even the VTEC system has been tweaked. What it does is to keep an intake valve on each cylinder open during compression, in order to reduce the amount of energy lost when the piston moves up again. Honda claim this will improve efficiency even further (and I don’t doubt them), but the downside of this appears to be a slight lack of oomph low down in the rev range.

The Civic isn’t the fastest off the line at the lights, and there’s a bit of a flat spot between 2000 and about 3500 rpm, which is where most of the overtaking action on Indian roads is likely to take place. To be honest, I’m doing a bit of hair-splitting here; there’s sufficient power available, but a little more in that rev range would have been useful, not to mention fun – because when you keep the loud pedal floored, this car is a lot of fun. There’s a great snarl from the engine as it winds itself up at 4000 rpm, and after 5000 revs life’s a picnic – a kick in the pants (a polite one, this being a Honda, but a kick all the same) and the Civic hunkers down and streaks off. All that wind-tunnel work pays off here, as the car simply slices through the air without discernible resistance. Straight-line ability is fantastic and the car remains unwaveringly planted even at higher triple-digit speeds.   It isn’t as quick as its competitors in automatic form (both the Corolla and the Octavia will post quicker times than the Civic’s 5.1 seconds to 60 kph and 10.4 seconds to 100 kph), but the way it seamlessly delivers its power is a delight. With a manual gearbox, it should be an absolute hoot. Nevertheless, the five speed automatic ‘box on this particular car is a paragon of refinement.Settle yourself in the driver’s seat and you’ll find a continuation of the design theme. The coolest and most obvious new feature is the split-level instrument panel. Apart from looking terrific, with its blue-glow lights, there’s a practical aspect to it as well. Much like a HUD in a plane, all you have to do to gauge important information like speed and fuel reserve is look ahead, instead of having to dart your eyes around. This may seem obvious, but it was only when I actually drove the car that I realised how much sense it made. If they had put the tacho in the top level as well, it would have completed the package, but as things stood (with the tacho at the second level) this was an extremely well thought-out instrument cluster. The angled dashboard was more Accord-like in appearance, hence more traditional. If you’re the sort who likes to carry lots of knick-knacks with you, rejoice – there’s an abundance of storage areas all over the place. The seats are nicely sculpted, with see-through headrests (a nice touch from the old City VTEC), but are a bit low as a result of the low roof, so taller drivers might feel a slight lack of headroom. No problems with legroom, though; there’s plenty of it both front and rear. As an ergonomic package, then, the Civic scores extremely well; all the important bits like seats and the steering wheel (which moves telescopically too) are adjustable, everything falls nicely to hand, the quality of materials and fit is top-notch and comfort levels are good – although not quite Corolla-good. It’s been a trait of Hondas that you feel instantly comfortable in them as soon as you settle in, and this car continues that fine tradition.

The Civic isn’t just a straight line wonder, mind you. The independent double wishbone rear suspension does its job commendably when you push the Civic hard around corners, feeling reassuringly planted and extremely well-balanced. The sporty, well-weighted steering wheel is great to use and delivers adequate amounts of feedback, although nowhere in the league of the Octie RS. It’s a boon in traffic, with very quick turn-in (2.2 turns lock to lock), but at high speeds it can take a little getting used to. Lane-changes at speed are dismissed with ease too, with the car remaining totally secure and unflustered. The brakes have a lot of bite and are well weighted, and in case things don’t go quite according to plan, there are front and side airbags and ABS as standard, with Vehicle Stability Assist (Honda’s version of ESP) available on some models.

You’re now thinking ‘Hey, lunch is really free!’, right? Well, it isn’t. The one chink (however minor) in the Civic’s considerable armour is its ride quality, especially at low speeds. It’s on the stiff side, and the car isn’t at its happiest crawling along on poorly surfaced roads. Of course, those low 55 profile tyres weren’t helping things, but I suspect that even if its shod with higher 65 profile rubber, the Civic will fail to match the ride quality of, say, an Octavia. This is a car that likes life in the fast lane, and the ride improves considerably as you give it some stick. Still, I wouldn’t lose any sleep over it, since Honda will almost certainly tweak the suspension, among other things, for Indian conditions.

I drove the Civic along Bangkok’s superb express flyovers, on equally well-surfaced inter-city highways and in reasonably heavy traffic and I can tell you that it’s a car that will appeal to everyone. There’s enough in it to keep the enthusiastic driver occupied, and someone who wants their motoring at a more gentle pace will be happy as well. Some may say the Corolla is roomier, or that the Octavia is better built and has a more pliant ride, but the point is this – as a complete package, they will be hard-pressed to match the Civic for new age design, performance, refinement and reliability. As for me, all I can say is this: all is forgiven, Honda – you’ve got your mojo back.