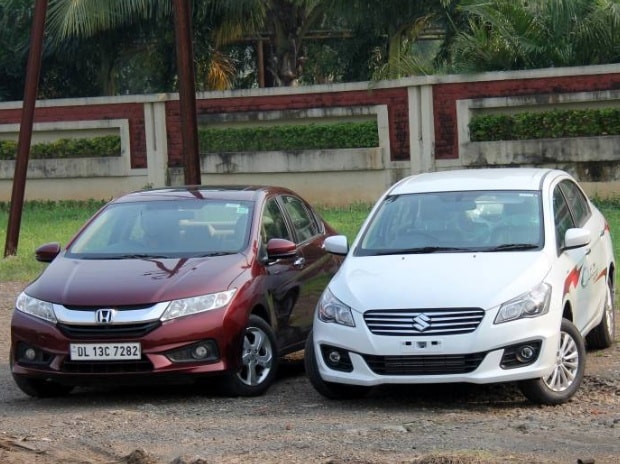 The Honda City versus Maruti Ciaz battle heats up the 110,000 odd mid-sized sedan market as the two top players are fighting it out hard for the top spot.

Maruti Suzuki's mid-sized sedan Ciaz has managed to race to the top spot in its segment (A3+) this year. Numbers show that the Ciaz has sold 53,644 units between April 2016 to January 2017, which is 19 per cent higher than its closest competitor Honda City.

In fact, Maruti Suzuki has managed to grow its market share in the segment from 29.1 per cent in FY16 to 41.2 per cent in FY17 riding on the Ciaz. Interestingly, in January Ciaz is the only car in its segment that has shown growth in sales during January, reporting a 20.2 per cent growth when its competitors Honda City, Volkswagen Vento, and Skoda Rapid all showed a drop in sales. City sales have fallen by 21 per cent in January, while Vento sales fell by 61 per cent and Rapid by 8.1 per cent.

As competition in the segment heats up, Honda is ready to launch a facelift version of its Honda City soon (on February 14).The new generation City was launched in 2014, and after two years of doing well, the sales started slipping since mid-2016, which is when Ciaz sales started growing.

J Sen, senior vice president, marketing and sales Honda Cars India said that the company is upbeat on the upcoming launch to take the top spot back in the market. He added, "As the Ciaz is available as a mild-hybrid, it enjoys huge tax benefits (the excise duty is almost half) and thus it is cheaper by almost a lakh compared to the City. That way, while both are mid-sized sedans, the price difference is almost that of a different segment."

Honda, however, does not have any plans to coming up with a mild-hybrid of the City to take on the Ciaz. Market insiders say that the company would definitely price the new model aggressively to gain market share. At present, the Ciaz is priced between Rs 7.53 lakh to Rs 9.96 lakh (ex-showroom Delhi) while the City is priced between Rs 8.32 to Rs 12.66 lakh.

MSIL, on its part, is ready with a facelift variant of the Ciaz that would start selling through its premium Nexa outlets soon to take on the City.

Commenting on Ciaz's success, R S Kalsi, executive director, marketing and sales, Maruti Suzuki India Ltd said, "Today, brand Ciaz is one of the most successful models in the country and the testimony is over 53,000 units of the car sold in the current financial year. This makes it the largest selling sedan in the A3+ segment. MSIL share in the segment has surged to 41.2 per cent in FY17 against 29.1 per cent in FY16."

Since the launch of Ciaz, Maruti Suzuki has sold total 1,40,226 units.

Abdul Majeed, partner PwC said that while the mid-sized sedan segment is facing heat from the SUVs off late and this year the segment as such has not grown, new launches might just spice it up. "The compact sedan segment is growing thanks to new launches, while the mid-sized sedan segment has not seen many launches off late. The facelifts of City and Ciaz might just bring back the excitement." He also felt that pricing war would not help in the long run, it is more about adding more features and understanding the consumer psyche.