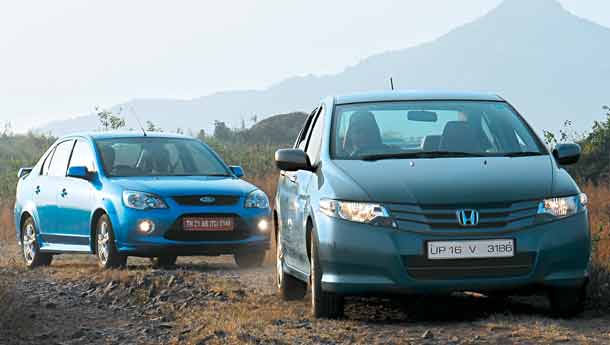 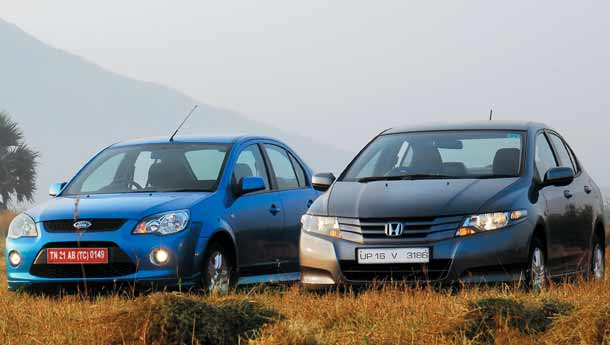 This is a yuck blue, I opined as I walked towards the bespoiled, padded up and generally pumped-up Ford Fiesta 1.6 S. Aman, our snapper for the day, laughed and then dismissed my comment with a stern ‘No Bijoy…I quite like the colour’. With a male colleague, I would have continued the argument but Aman normally gets to have the last word in BSM. ‘Shall I call it electric-blue then?’

Actually, shades of  blue do not matter much here. The fact remained that it was a beautiful November morning and we had two 100 bhp plus sedans to lock fenders with. In the blue corner, ahem, was the Ford Fiesta 1.6S and resplendent in polished metallic grey was the piping hot Honda City 1.5S.  Rohin, our road tester, who proclaims himself to be a BMW guy during the day but sleeps with a Mattel-made blue Mustang with white stripes by his side at night, was already trying his best to malign my thought process. ‘That blue just fits in – just add stripes’. ‘That is a YUCK blue’, I yelled at the top of my voice. ‘I can test one but won’t be able to live with one’, I added. Told you, male colleagues are more submissive.

Not so long ago, Rohin was trying to fill my rearview mirror with the aforementioned, blue, Ford Fiesta. And that is when I decided to give the VTEC motor of the City a serious workout. Sixteen valves started emulating butterflies as the engine responded by revving to the stratosphere and letting the speedo climb to 150, 160 and a very illegal 180 kph – enough to make the blue speck in the mirror pretty inconsequential. Allow me to let the cat out – the new Honda City 1.5S is quicker and faster than the Fiesta1.6S. And the Fiesta is a whole lakh cheaper than the City VTEC. More bang for your buck or more money in the bank? Think you need more info before you reach a decision?  Read on.

Looks and design
Bala, who drives an Accent, Rekha, who drives a Swift and Vishal, who is contemplating a new car in this segment and lots of children on the road, all liked the way the new Honda City looked. And most amazed was Sandeep, who owns an outgoing City. ‘C’mon man, I bought the City for its looks and Honda has gone ahead and changed the model’. He was, as expected, inconsolable. F&R opinions aside, I think Honda is trying to be different when it comes to the design of their cars. They are no longer boring and there is always a hint of the concept car chic. The swooping roof-line and abrupt tail (almost a notchback to look at!) treatments are certainly meant to shock. While I like the overall effect, I do think the car could have had more feature lines on profile. The scooped-out indent which runs from the front bumper to the rear door is indeed a flourish, still. Seen from rear three quarters, the City looks like a 2 Series BMW. Yup, if ever there was a 2 Series, it could look like this thanks to the kink on the C-pillar and the trapezoidal tail-lamp design.The Fiesta, honestly, looks a more balanced design, with the right amount of overhangs on both ends. In the same breath, you can add the word ‘traditional’. The problem area with the Fiesta design is that when you see it next to the new City, it looks er…old. And like most European Fords over the years, the design lends itself well to add-ons such as the spoiler and skirts. And yes Rohin, it can carry two solid stripes down the middle to evoke the Shelby legend. While the City looks young and fresh as a form, the Fiesta looks mature and complete. I am giving one star more for the City only for the additional number of ‘wows’ it got.
City : ****
Fiesta : *** Interior and comfort
It is easier to get in and out of the City than the Fiesta, thanks to the taller overall architecture. That does not mean that it is as tall as the SX4 – that is a car you walk straight into. Like in the case of the previous model, the interior of the City is cleverly designed by, in all probability, a bunch of people very good at space utilization. The interplay of beige and black gives a sense of room and there was ample leg/elbow/head room for me – that means most of you are going to be alright. The cascading centre console is sophisticated and features an advanced integrated audio (read a USB port and no CD player). I remember questioning the logic of not providing a cassette player in the last generation Honda Accord not so long ago…and I’m not opening my precious mouth now. It meant driving without music for a couple of days till Rohin, him again, provided me with a stick full of Phil Collins songs. Aargh! The Fiesta tries to impress with numerous design details and that makes it a pleasant place to be. And it provides a CD player too, in case you are wondering. The Fiesta also imparts a sense of security that comes naturally to well-built European cars and it starts from the way the doors shut. Once you find the correct driving position, you are better off in the driving seat of the Fiesta than the City. The rear seat of the Fiesta is comfortable alright, but does not allow the passenger’s leg to fold under the bench – which the City allows thanks to clever floor design. Personally I like the interior of the City, but would like to award it only the same rating as the Fiesta – an automatic climate control system could have earned Honda that edge, but sadly you still get knobs to fiddle around with.
City :  ****
Fiesta :****

Engine and performance
Ah, i-VTEC engines for the masses! What a concept! Till recently Honda charged premium money for VTEC engines for the City models, while the world was getting it pretty standard across the board. But there was nothing much to complain about, since the i-DSi engines were equally good when it came to usable performance and economy. But Honda and VTEC go together well and it is nice to know that if you buy a City, any City, you get the technology that made Honda the best engine makers in the whole world. The super silent motor displaces 1497cc and feeds through an electronic fuel injection system to develop a healthy 116.3 bhp at 6600 rpm and 14.9 kgm of torque at 4600 rpm. The 1596 cc heart of the Ford Fiesta develops 16 bhp less, but has similar torque available as early as 3400 rpm. The Ford is not much heavier than the City, but still loses out to the Japanese contender in the power to weight stakes in a huge way. And this is reflected in the times recorded by our equipment. The City can do 60 and 100 kph runs in 4.78 and 10.59 seconds, while the Fiesta took 5.4 and 11.65 seconds respectively. I do get this strange feeling that the test Fiesta was struggling (bad fuel?) and thought it could do better sprint runs. The pattern continues through passing speed runs and all the way to the top speed – the Fiesta runs out of steam around 175.5 kph, while the City goes on to prove a genuine 180 kph plus point.

Leave the numbers aside and compare the experience for a change and you see that it is the Fiesta that makes the right noises and imparts the sensation of speed and stability better. It is simply more rewarding to go through the gears too. The City gear box, with its short throw lever, is more matter of fact in comparison. Fatter rubber and better ride quality aid this sensory win for the Fiesta and that we will talk about soon. As a test driver torn between emotion and hard core numbers (that never lie), I have to hold the City’s hand and declare it the winner in the performance stakes. But the Fiesta did put up a good challenge indeed.
City : ****
Fiesta : ****  Ride and handling

Ride quality on bad or no road situations was never the strength of the City, but the new car has changed that perception. Ride quality is more like that of a European car now, if not in the same league as that of the Fiesta. The Fiesta does have more ground clearance too and that means less heart-ache when driving through rough terrain. Both cars feature similar suspension set-up, with struts up front and beam at the rear, and that means ride quality and handling are directly related to the quality of damper/springs and rubber. This is the Fiesta’s strength area and it can teach the new City a lesson when it comes to confidence inspiring handling too. A thank you note should go from Ford to 195/55 Goodyears, that gives the car sufficient grip at any given speed.  The electric power steering of the test City was a bit vague for comfort – we did ask road testers in other magazines about this and have come to the conclusion that it was unique to our car. There is certainly more feedback from the Fiesta steering and turn-ins are crisper too.
City :  ***
Fiesta : ****

Verdict
So the City wins when it comes to outright performance while the Fiesta gives it a good run in almost all other parameters. Thankfully, this generation of City comes with airbags and ABS across the models (thank you, Honda!) which makes the case for the Honda even tighter. If you are choosing between these two cars to have the perfect ally for spirited motoring, then go for the Fiesta and as Rohin would say, stick on the stripes for good measure. You will have a lot of fun and you can use the Rs one lakh that you save in the bargain to buy fuel, which the Fiesta likes to burn at the rate of 12.5 kpl (combined cycle). But if you want the winner of this shoot out in your garage, it has got to be the new City. Our test City returned 13-14 kpl (combined cycle) despite blistering the Fiesta all across the performance sheet. The new City is an evolved automobile – one that is stylish, safe as well as quick. And you will get that additional Rs one lakh back when you are ready to sell the car four to five years down the line.