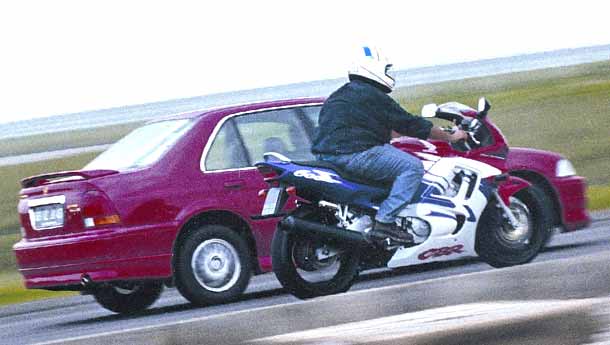 Other cars on the subcontinent are yet to challenge the 100 bhp Honda City 1.5 ExiS in the performance stakes. But it took only five seconds for another Honda to show the City its proper place in the Honda family tree. As far as cousins go, the CBR 600 F is a pretty one. She has been on a race-track diet since time immemorial and you can’t find an ounce of fat through her ultra modern clothing. And oh boy, were we thrilled to meet her.

Simple. The Honda CBZee we had summoned for a road test was not equipped enough for an extreme test shootout with the Monza Red City that had come our way. After considerable thought we decided against bringing down Heinz-Harald Frentzen’s French GP-winning Jordan Honda. At 700 bhp, it was too powerful and none of our staffers had approached the FIA for a super licence. We avoided Repsol Honda GP two-stroke wonders on the grounds that they were rather crash-prone this season.

Then our eyes fell on what could be the ultimate competition to the City ExiS, parked at DC Design. The CBR belonged to Bonny, son of the popular designer, and a hardcore automotive enthusiast himself. But by the time we had the Honda cousins ready, monsoon clouds were hovering over Mumbai and we almost thought it would be another two months before we could fire our imagination.

But on June 26th 1999, the two Hondas met. The location was our makeshift test track (call it Eastern Creek, if you like...) where we do most of our top speed and acceleration tests. However, before we actually turn the key and thumb that starter, let us get to know these extreme cousins better.

Honda, along with Suzuki and BMW, is one of the few manufacturers who make cars as well as bikes. But Honda races them at the supreme levels of motorsport too. We do not know when a non-Honda won a world championship 500cc title, what with Mick Doohan winning four on the trot. And all of us know how, first Lotus, and then Williams won GPs with Honda power.

Our extreme-test Honda City came in Monza red with all the bells, spoilers and skirts that you can imagine and leather trim and gold on chrome plating for the grille and badges. Also thrown in was a set of after-market alloy wheels wearing standard Bridgestone rubber. The stock engine displaces 1500cc and has a 16 valve single overhead cam layout. The result is 100 blip on tap at 6500 revs and 13.1 kgm of torque at 4600 rpm. This Honda is a stunning performer in its league and by far the quickest production car we have tested. Further, it actually is the only true 100 bhp car this side of the Mercedes-Benz E-Class; in our country, that is.

The CBR is race derived. Actually it is better suited for race tracks than roads. The 600cc class sells more sports bikes than any other and most of the time, the connection to racing machines are too obvious, whether it be Honda, Yamaha, Suzuki or Kawasaki. The 600cc super sport races held in tandem with the GP circus attract huge crowds and usually witness some seriously hot action. Our extreme-test machine came wearing the Honda racing war paint of red, white and blue. From any angle, it is a lean, mean machine to look at and its view from the front three-quarters can take the breath away.

While the Honda City has a monocoque shell, the CBR uses an aluminium spar frame. Like the Honda City, the CBR has an in-line four cylinder engine, but one that displaces less than half its capacity. This 600cc DOHC also has 16 valves doing the feed-up job. But now, hold your breath... this 600cc motor produces 100 bhp too. Honda claims 98 bhp at 12750 rpm and 107 bhp with the ram-air factor added on. Ram-air, dear reader, is just one way of force feeding the engine and comes into play when the CBR is cutting across the wind resistance at speeds that local cops would not like.

The silence was shattered when Bonny thumbed the CBR to life; a deep-throated growl and every blip of the throttle came with free goose pimples for all those watching. I got behind the wheel of the City and cranked her up and blipped the throttle... hmm, not bad, I thought as the revs climbed heavenwards. I could see Bonny in my rear view mirror, all set for combat. I decided on a roll-on start with the dubious intention of dropping the clutch before Bonny could react. Or so I thought.

The Bridgestones wailed as I left the clutch but before I could say ‘I had him...’ the CBR bombarded my side and by the time I shifted to second, he was a distant speck. It was a no contest on acceleration stakes. Want figures?The Honda City manages a zero-to-60 kph run in just 4.5 seconds while the CBR takes all of five seconds... to touch 100 kph! Stumped? I was and I just wanted to park and let the City watch its little sister in full cry. In case you think it was a mistake, it was not, because we did this same exercise six times – with the City biting the dust every time. How about mid-range punch? In the third cog, the City slapped the century mark and suddenly the CBR seemed to be in the vicinity...(in other words, a larger spec). A perfectly timed shift to fourth and the tacho hoisted to the 6400 mark where the City is supposed get all that power out. The speedo climbed steadily to 150 kph... l60,165, and I was now thinking, how much will that two-wheeled thing climb to? Even at a top speed of 175 kph, there was no way that the car could catch the hot CBR. On the cooling down lap, Bonny caught up with me: ‘Guess she crossed 200 kph. Did it look fast?’

Oh yes! She was fast and furious. From then on, we had another three laps to pose for Deepak’s camera and every time I lined up for a blast, the CBR started off from half a km back and by the time we passed the camera, the bike would be next to the City. It was an amazing sight seen through the car’s rear view mirror. First you see the headlight, then a hint of red and blue and the rider and his helmet, then... whoooooosh. Blistering barnacles! The audio equivalent of a whiplash hits you as Bonny and his CBR speed past the car, glued to each other.

So much for an extreme test. At no speeds – initial acceleration, mid-range or top end did the four-wheeled Honda catch up with the two-wheeled cousin. We knew that before, but we didn’t expect the humiliation to be this complete. After the photo session, I parked the Honda City and watched Bonny do some stunning 215 kph passes down the straight.

For the first time after Honda launched the City in India, with a ‘Sports’ badged version, I hated it. Maybe we should have taken a smaller CB 250, maybe we should have compared the CBR 600 F with something like a Honda NSX.But then it wouldn’t be an extreme test, right? You see, with Extreme Tests, sometimes you get carried away by wild ideas.

WHAT?
Honda City 1.5 ExiS vs Honda CBR600F
WHEN?
August 1999
HOW?
The Honda City was the hottest amongst
all Indian cars then, and we just couldn’t
have enough of it. Since there were not many cars then to keep writing about anyway, we were looking at new angles to feature the same cars. Happily, Bonny Chhabria, DC’s son, had another Honda... but it had two wheels less. However, we went ahead and put two different Hondas together and let off the fireworks.
WHY?
Trust us, the best, most fun-to-do/fun-to-read stories happen when we have nothing else to drive or write about.
WHAT WE THINK OF IT NOW
It’s time to do a sequel. How about a
Mugen-tuned Accord V6 and a CBR1000RR?