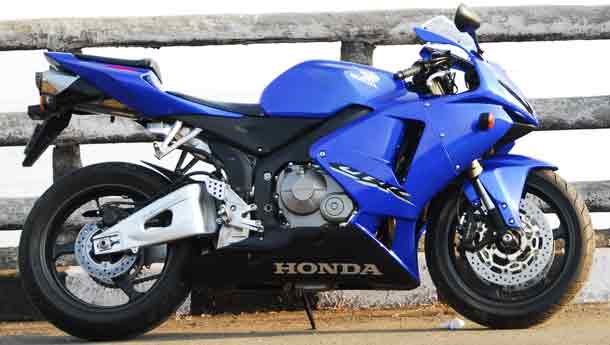 I've never really liked the CBR600 as a motorcycle. I think the reams of glowing reviews that claimed that it was the one sport-oriented motorcycle that could do it all put me off at some point.  How can a motorcycle be so... er... equal opportunity?

However, leaning into a corner, going too fast to read the speed limit, nervously watching the tachometer needle jump up to a sprightly 13,000 rpm (2500 to redline still left!) and a stoic digital speed readout whose first digits are both two... I'm beginning to really, deeply, truly like the Honda CBR600RR. Especially because no matter how far into the deep end I am, the CBR feels reassuring, calm, friendly and like it's on my side. And that's how it will always be.

I've come almost thirty kilometres on the bike so far, and it's been lovely. I've discovered that all the yak-yak about 600s lacking torque is, as Colonel Potter from M.A.S.H would put it, horse-hockey. They only lack torque at a racetrack, where the drive out of a corner is all-important. Everywhere else, 5,000 rpm on a 600 mostly feels just right – just short of ballistic, and still way more than legally required. The ballistic bit arrives bang on time as soon as 10,000 rpm are up. How could you criticise a silky machine on which 11,000 rpm means two things? One, the visible world is trying its damndest to crash into the bike right through the visor. And two, you could still shift down and have the machine leap forward even harder with a full four thousand rpm left to the redline. The CBR600RR is great and ridiculous at the same time. And I mean in that in the nicest, most sincere sort of way.

Back in the corner, the apex arrives as I planned it, I feel no lack of torque or power and the drive out of the corner is even better than a litre-class inline four – in qualitative terms. A 1000cc four is pure fear. Open the throttle and instantly, the rear tire breaks traction, wants to come around, makes you break into a cold sweat – you have to manage all of that and you overload on adrenaline. It's a minor miracle every time you make a corner without a highside and eventually, you will get careless and crash it. Unless, of course, your last name is Schwantz, Doohan, Bayliss etc. The 115 bhp CBR600RR is very powerful too, but altogether more controllable. Where you'd be scared silly sneaking a 1000cc throttle to twenty per cent, you could probably get exuberant with this one and come away unscathed almost all of the time. I think what I'm getting thrilled about here is the impression that I inched closer to the 600’s limit, whereas a 1000’s limit is way beyond my current riding horizon. I guess it's roughly the difference between a superb thriller and an equally great horror flick.

And like the reviews say, the CBR600 is genuinely a motorcycle for all riders. The 2006 model I am on is completely stock and as such, it feels ready for anything. It isn't a tipped-on-the-nose racebike and it most certainly isn't a spongy errand bike – although it could be both, right now. And that's the beauty of it. Riding in traffic, I don't notice the gearshifts, the radiator temperature rising or any discomfort on the part of the 15,500 rpm engine. It just fades into the background, letting me get on with extricating the both of us from the jam. And when the road finally opens, three downshifts and it'll be off like a shot, leaving a raspy engine note in the wind and a rapidly disappearing LED tail lamp with an exhaust can under it.

Unchanged from 2005, the CBR600 used to be an F. This meant that the motorcycle was developed for the street and modified for racing, which is how the CBR600 gained a reputation as the ultimate middleweight sportsbike. In the face of focussed, single-minded competition, it was the versatile one. It was able to keep up, and do more. It's a twenty-year old legacy that began with the Hurricane and continues to this day. And these were all Hondas, which meant great quality, superb reliability, lots of race wins and ultimately tons of sales.

The 2005 motorcycle, however, was badged an RR. This was a significant move. The 600 sportbike sales are closely tied to supersport (600cc production class) racing, and because the CBR was always street-first, Honda seemed to be losing their winning streak. The response was a bike that was developed for the racetrack and then modified to work well on the street. Honda drew engineering and design ideas from their (then) all-dominating Rossi-piloted RC211V and the result was a good looking, focussed, beaky CBR6. It retained some of its all-round ability but was much, much faster around the racetrack. Among the big changes for the 2005/2006 CBR600RR was the slinky new body work, fully adjustable upside down forks, more efficient disc brakes up front with the very hip (and effective) radially mounted callipers. The entire frame was new from the ground up, including the RC211V-style, very compact Unit Pro-Link rear monoshock, and the beefy swingarm. In the transition, the CBR gained focus and lost a full 6 kg. On the engine side, the motor was virtually new, retaining its four-valve DOHC configuration, dual-stage fuel injection, ram-air on top, managing 115 bhp and taking its redline up to 15,000 rpm. The international magazine circuit uniformly found the CBR600RR to be an exceptionally adept bike at the racetrack, despite it being the heaviest in its class.

Not that you would notice the extra weight on the bike, or any lack of streetability for that matter. The CBR6 feels light on its feet, utterly planted and totally committed when you open the throttle. What more could you want? It also offers footsure handling, a nice absorbent ride and totally awesome brakes – they're just right, grip'n'bite without being scary. It also happens to be quite pretty. The Line Beam headlamps, as Honda likes to call them, look great and the front of the bike has a very birdlike appearance. The underseat exhaust looks the business and perhaps the only criticism I can level at the CBR is that the swingarm isn't the cool, matte black like the frame. Although, truth be told, they fixed that on the 2007 CBR600RR, which happens to be an even more focussed, more powerful and lighter new CBR600RR, designed solely for an unbelievable assault on the supersport championship.

And to return to my deeply blue CBR600RR, I'm sold. I'm convinced that this is all the motorcycle you really need in our country. A litre class may make more sense on a purely bang-for-buck level, but a 600 – this one being a great example – is all I want.

No six for you

If launched in India, the CBR600 and its ilk would probably form a nice chunk of CBU or direct import sales. However, the Harley-inspired 800cc and above rule has effectively scuttled the possibility. The only legal route that remains for 600cc machines is for the manufacturer to resort to CKDs or SKDs and then homologate the machine to Indian norms. Which, as you can tell, is not going to be easy-peasy? And look at what we will be missing – all kinds of sweet machines like the Suzuki SV650, Yamaha R6, BMW F650 Dakar, KTM 690 SM... ooh!

1987 Honda CBR600 Hurricane
Honda broke many old axioms with this one. Full bodywork channeled development money into pure performance rather than mechanical cosmetics. Result was an 83 bhp machine weighing just 180 kg. It was also the most versatile of the bikes.

1990 CBR600F
10 more horses, reworked motor... it was enough to keep the competition at bay. The Hurricane name didn't make the upgrade, though.

1991 CBR600F2
The first ground-up CBR was called the F2, which eased past the 100 bhp mark with a lighter new motor boasting an oversquare configuration, large carbs et al. A new frame, new suspension and RC30-style wheels made it the lightest, quickest and most powerful mid-weight sportsbike in the world. Again.

1995 CBR600F3
Everything was made smaller and lighter, but the big deal was 3D-mapped ignition and dual stage ram air. The F3 was sharper and stronger... and therefore harder to beat.

1999 CBR600F4
Full-on, ground-up redesign brings 110 bhp and lots of newer, cutting edge technology. Also about the time when the other Japanese 600s came very close to nudging the CBR6 off its pedestal.

2003 CBR600RR
The F4i continues as a softer model, while the MotoGP-inspired RR rocks the mid-weight sportsbike world. Regarded as the most narrow-focus, hi-tech Honda ever.

2005 CBR600RR
Until this one. Gets more of everything, and becomes even more focussed on track performance.

2007 CBR600RR
And finally, the ultimate CBR600RR. The one that comes closes to entirely forgetting the versatility mantra that makes the Honda so special. But let's not forget, this one also has lots of torque, a complaint that dogged everything from 2003 onwards...